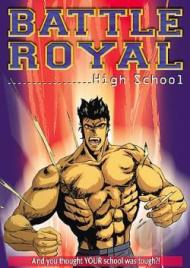 Hyoudo is a ‘typical' high school boy who carries out his martial arts battles wearing a jaguar mask. However, there's more to Hyoudo than meets the eye - he's also the counterpart to a Demon Master named Byoudo from the dark realm, and soon comes to be possessed by the evil force! As if that isn't strange enough, there's also an evil Fairy Master whose goal is to spread her nests of bloodthirsty offspring, a pair of space time continuum enforcers, a sword-slinging demon hunter and tentacle monsters galore. Will the Demon Master Byoudo or Fairy Master succeed in taking over Earth, or can they be stopped?

StoryWhat do space detectives, burly men in jaguar masks, demons from another world, man-eating fairies and tentacles have to do with each other? That's right - ABSOLUTELY NOTHING. It should come as no surprise, then, that the farce known as Battle Royal High School is as ridiculous as ridiculous can get, comprised of a mishmash of genres and styles so varied that its creators were clearly playing a game of drunken Mad Libs while in the drawing board phase. The first 10ish or so minutes, I kid you not, play out something like this: 1. Guy in jaguar mask fights other guys not in jaguar masks. 2. Long panning shot up sinister staircase ends with a pause on a few scary-looking monster types; cue droll, boring dialogue about an oh-so-unique prophecy involving said jaguar guy. 3. Suddenly on a spaceship, in space (what?!); two people intently watch futuristic display screens, and discuss a space time anomaly coming from the school. If you're either facepalming or slamming your head into your desk to make it stop, you aren't alone. Absolutely nothing makes sense about Battle Royal High School once the ‘plot' kicks in, leaving you with little to do but laugh at how outrageously random it is. Don't get me wrong though, Battle Royal High School isn't a Psychic Wars or Black Lion - it's not so bad it's funny, it's just bad. At times it edges closely towards the borderline of genuinely comedic, but falls just a little short of its goal. However, I know something that would help make Battle Royal High School a treat to watch: alcohol.AnimationFor being made in 1987, Battle Royal High School's animation is decent enough. Fight scenes are well-animated, there's a good level of detail and ample gore throughout, and the fairies do look creepily-evil. But seriously, what's up with the horrific character designs? Hyoudo and Byoudo have such pronounced facial features and intense eyes that they are a dead ringer for Sam the Eagle.SoundI remember absolutely nothing about the music. I can only attribute this to having facepalmed so many times that my eardrums were jostled out of place, destroying my ability to hear. However, I do remember the English dub, which was outstandingly atrocious.CharactersIf the characters score was based on the less is more principle (i.e., four people but only two bodies!) or quantity over quality, Battle Royal High School would earn a hefty 50/10. In addition to showcasing far too many random characters, they all tend to look the same, causing yet more confusion. None of them are interesting, except in a ‘wow, I'm glad I'm not THAT guy' sort of way. Take Hyoudo - he's clearly not the sharpest tool in the shed. He fights in a jaguar mask simply because he found it in his house and likes it. He's distracted by shiny objects at the drop of a hat, even when Serious Danger is happening (by ‘shiny object' I mean a hefty pair of breasts). And above all else, he's a man's man who dominates his enemy: intelligence. +2 for the little fairies as they at least were awesome; -2 however for the Main Fairy, who was just as fail as the other characters.OverallThere's little to no reason to watch Battle Royal High School, though given a ton of people tend to mark things ‘want to watch' after I write a ranty review, there's probably not much I can do to stop you! With an absurd plot, too many characters and a smattering of genres that feel forced together, the OVA's only benefit is the fight sequences and random gore. If you've consumed a copious amount of alcohol and feel like a good laugh, try on Battle Royal High School for size. Otherwise, do yourself a favor and eat a ham sandwich instead.

Don't listen to the other reviewers, they are obviously too dumb to understand this OVA which is actually very straightforward. There is absolutely nothing ambigous or unexplained in the story, which is very fun, has a mix of various genres (even tokusatsu) and the pace is non stop action. The animation is good throughout the OVA, but what sets this one apart is the character design, which is very different from the ones seen at the time. The sound is nothing to talk about. The characters are funny and likeable. Overall, despite what the idiots above said, this OVA is a must see for any anime fan out there, I recommend it and guarantee you will have fun watching it (unless you are one of those moe watchers...).

Pretty solid as far as most anime movies go. I don't know about these reviewers who say it's a confusing plot when it's pretty straightforward: Plot: A high school student who's strong and wants to be the best in the world. A demon lord from another dimension who possesses the student in order to foil a plot of those who seek to rule the human world and destroy him in the process. A time traveler investigating spatial distortions that are centered around the high school the MC is located. What will happen when these forces collide? Animation, Sound, Character: This is one of those instances that proves hand drawn animation is superior to CG as it holds up pretty well. This was made in the late 80s but resembles animation of tv shows made in the mid 90s. The character development is uninspired but what can you really expect from an hour long movie? The music is simply a backdrop and the sound effects are okay. Nothing really stands out. Conclusion Pretty decent movie with good animation for it's time and forgettable characters and sound design. Worth a watch if you have an hour to burn for some martial arts action and demon slaying with a dash of gore.