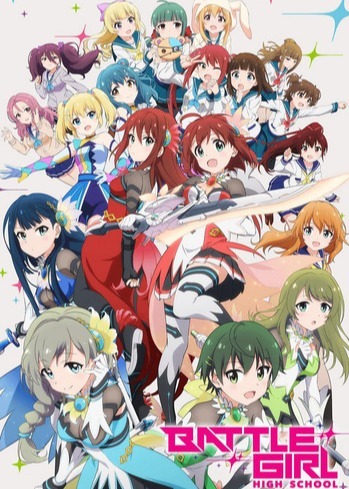 Battle Girl High School Episode 1 - We Can Do It!

Miki, Haruka, and Subaru get a surprise assignment from their teacher. Meanwhile, Urara and Kokomi have some problems of their own.

Is That What Gets You?

The Meaning of the Iris

Renge is Kurumi and Kurumi is Renge

The show this show utterly failed to try and copy. Save yourself the trouble, and go watch this far superior, far more awesome thing.

If you liked the mix of 'magical girl' and sci-fi for one of these series, you'd probably enjoy the other. They're very similar, although Symphogear is the much better of the two.

The story is set in a parallel Japan very similar to the modern Japan we known today. Increasing income divide, creeping environmental pollution, unsolvable garbage problems, childcare waiting lists being disputed while those directly involved aren't present, repeated cases of corruption... Japan's government, entrenched in its own vested interests, can do...

Both of these shows throw plot out the window. They have vague reasons why the large groups of girls are important, but don't let those 5 minutes of explanatons fool you: They're about getting a dozen or so anime girls together to do cute things and that's it. They're 90% 'filler'. It's like fan-service, but without the eechi. But if the lack of story didn't stop you from enjoying one, I'm sure you'll enjoy the other.

One day, out of the blue, the five worlds were linked together. Our blue world, Earth. The black world, ruled by night and magic, Darknes Embrace. The red world, protected by prayer and by the gods: Tera Rubily Aurora. The white world, managed by science and computers: System White Egma. The green world, governed by weapons and armies: Glynnesert. Meanwhile...

Both shows are about a bunch of girls who kick ass with their powers to save their world while doing school stuffs. Both shows you'll see a lot of bathing and blushing. Fans of one will likely enjoy the other.