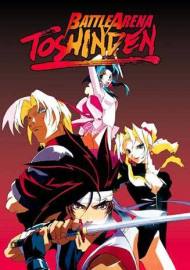 Please Note: Battle Arena Toshinden was a quick, last minute watch and review just to fill another two empty squares for my Anime Bingo Challenge: Spring 2021 Edition game board. Please take that into context when reading this review. Story Basing this completely on the anime and not the video game it is based off of, Battle Arena Toshinden takes place one year after a fighting tournament known as the Toshin Tournament has ended. First, we get a clip of the ending of the tournament at the very beginning of OVA episode one, which is never truly explained in any significant detail in either episode. We do learn that a young sword fighter, Eiji Shingo, is in search of his missing brother, Sho. Eiji believes that a powerful fighter by the name of Gaia has the answers he seeks. The two confront each other, but are interrupted by the fighter, Chaos. A quick battle ensues and then the timeline is forwarded a year ahead to the present day. It is here we discover that an unknown, mysterious fighter with great strength is purposely hunting down the fighters of the Toshin Tournament. Eiji and his friend and rival, Kayin, team-up to unlock the mysteries of this unknown fighter, all while Eiji is still searching for his brother. I have not played any of the Battle Arena Toshinden video games. If you have not either, then you likely will be wondering what is going on throughout the entire two episodes. The story telling is rushed and the plot is all over the place. Animation This is probably the only true bright spot of this anime. However, I am biased due to the fact that it is reminiscent of the style of art and animation I grew up with when I first began to watch anime. That was in the mid-late 1990’s. To be fair, J.C. Staff did put some solid effort into the constant animation in every scene and kept the style true to the timeframe of its origin. Sound Bad, but then again the quality of the streaming source was not very high at all. If it had been better I still think the OP and ED were below average and that the overall music and sound effects were completely forgettable, even if they were from a higher quality source. Characters There is practically no character development at all. The characters are all over the place nearly as bad as the story is. Eiji and Kayin are badass sword fighters. Gaia is an overpowered, huge sword-wielding enigma. Sofia looks like a combination of a college girl and dominatrix, who just so happens to be a whip wielder as well. Ellis is a Lolita-type circus performer. Chaos is, uh, well, um…actually, I really am not sure. He is crazy though, that I am sure about. Finally, Uranus is an evil organization leader who seeks revenge against Gaia. Other than that, the remainder of the cast is even blander and their back story is completely non-existent. Overall If you have played any of the games prior, then perhaps this is a better anime for you. If you have not, I suggest wasting an hour of your time elsewhere. I will say that the fight scenes and the classic 90’s art and animation style are what make Battle Arena Toshinden from being a complete waste of time though. That much I did enjoy and did not expect to be as good as it was. Entertainment Score: 4/10 Achievement Score: +3 to Overall My expectations were Low, and it delivered Slightly Above those expectations. Age Rating: TV-14+ (action, minor graphical violence) Additional Information: Video Format:  480p Streaming Audio Format:  English dubbed Publisher:  YouTube Equipment Used:  Acer AN515-53-55G9 Nitro 5 Laptop

Story:  It's plot is almost non existant and it's just an excuse to show fights, fights and more fights. It can be summed up by saying "an evil organization goes after the participants of a martial arts contest, and then the participants join forces and suceed at defeating the organization" without missing any important detail (and it's not a spoiler becuase it's totally predictable). Animation and sound: Despite being the strongest point of the OVA, the animation was mediocre. The music is pretty much forgettable.  Characters: As you can imagine after reading the story part, the characters lacks any development. It's like if they didn't care developing the characteres at all and just focused on making an excuse for making them battle between each other. Overall: Everytime you hear that some studio made an anime based on a fighting game you expect it to be bad. Battle Arena Toshinden is not an exception. The only "good" thing about it is that it can get rid of people's insomnium, because it's so boring that it'd make you fall asleep before you were able to finish the first OVA. Don't waste your time with this and watch something else, there's a high possibility that you'd find something better than this crap.