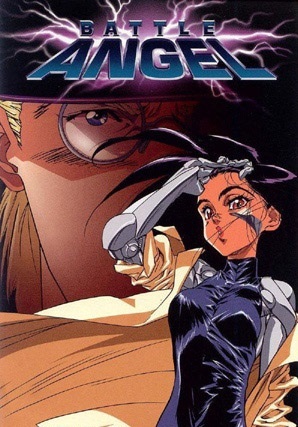 What I Liked: The dichotomy of the idyllic Zalem and the "fallen" Scrap Iron City, told through both the setting and the characters. The fact that Alita / Gally acclimatises to her new cyborg body quickly and bypasses the cliched "lost humanity" angst. Great animation and character designs (for the time). Good pacing, with a number of interesting minor plotlines.

What I Didn't: Lack of development on Alita / Gally's past (to be expected, though, of a <60-minute OVA). Ending is a little open-ended, giving the impression that it's a marketing ploy to get people to read the manga.

Final Verdict: Sure it's a mish-mash of science fiction cliché, what with an amnesic female cyborg-turned-bounty hunter living in a cyberpunk crapsack future, but it's what Battle Angel Alita does with all these elements that makes it a good watch. The setting feels gritty and violent, the characters are compelling and the brilliant animation holds up 21 years later. Even though it feels like a marketing ploy (being very short and lacking some detail in places), I liked every minute of it.

Battle Angel Alita is a fun, cyberpunk OVA about an android named Gally; found in the dump by a cybernetics doctor. The anime is a solid effort in the cyberpunk genre, and whilst not the most engrossing it is definitely a good time.

The OVA sets up a very cyberpunk-esque environment; we have this decrepit town rife with crime whilst up floating above is the city of Zalem, described as some sort of 'promised land' by certain characters. The style the OVA boasts really reinforces the grim environment that Scrap Iron City possesses, a City with little hope. As for the characters that populate the city we get a multitude of fun designs, especially the doctor and his mighty chin. Gally herself has a pretty great design with her duster coat and metal limbs.

We are treated to a fair bit of action, most of which is pretty well done although it's doesn't build up much tension as every fight is resolved rather effortlessly by Gally. She doesn't encounter any real difficulties combat-wise. The scenes in-between action do a decent job of setting up the world and getting across the motives each character has. It's very clear who wants what. The pacing is good, it flows between action and calmer, dialogue scenes seamlessly.

Unfortunately this OVA adapts material from a much larger manga series. It has an open ending with a few loose threads. I felt that with the material it did adapt it managed to create a good anime in its own right, but it seems to me that the intention was to get people to read the manga. I suppose they were successful in that I really do fancy giving the source material a try.

As previously mentioned Battle Angel Alita is a very solid anime with great aesthetics, a decent story and some likeable characters with very clear motivations. For those of you that are fans of the genre there is plenty to enjoy, and if not necessarily a fan then there is no harm in giving this OVA a try.

When a skilled cyberneticist stumbles upon the remnants of a female cyborg he decides to save her and manages to restore everything but her memories. As she regains consciousness it’s made clear that her robotic body hasn’t reduced her humanity to something entirely artificial and she is still capable of understanding and developing feelings of love, loyalty and devotion.

Such is the premise of Battle Angel Alita, set in a post-apocalyptic world where people without access to Zalem, a floating city of presumed luxuries, are forced to live in a society filled with garbage that’s dumped from above. The story spends most of its time following the titular heroine as she sets out to find her own reason for being whilst encountering loads of robotic criminals, organ thieves but also benevolent beings she grows to love. Because of its length, this OVA merely touches the surface of what the manga depicts but even so the pacing and execution is somewhat impressive. Events rarely feel rushed and there’s enough development within the cast and storyline to downright surprise viewers who expected a work so short to come without impact. Furthermore, the conflict at the core of it all grows increasingly interesting as the main character, Gally, struggles to find her raison d'être despite the obstacles in her way. By no means excellent, but most certainly good, the story came as a pleasant surprise.

Battle Angel Alita is the combined effort of MADHOUSE and a less famous studio which means expectations ought to be high. Whilst not particularly mind-blowing in any sense of the word, the animation definitely lived up to the standard of an early 90’s production with simple yet appealing character designs and backgrounds that despite a certain lack of detail manage to enhance the gloomy atmosphere.

I also found the action scenes to be better than expected since they skipped the bad habit of depicting each and every move using obnoxious still frames and instead animated the punches fully whilst using the right angles and various techniques to hold back expenses. All in all I fear I might have been a bit too generous with the animation score but nobody can deny that it’s very satisfactory for its age.

Most of the voice actors did a good job with their respective characters but the soundtrack itself left lots of things to be desired. The music was never particularly inappropriate but nor was it very good with simplistic tunes used over and over again. Furthermore, a lot of scenes went on without any background music at all, which can work just fine in some cases, but didn’t for this particular production.

This is usually the hardest category to succeed in when it comes to short OVA’s but they did an admirable job developing the characters. Don’t get me wrong, their motives and ambitions are as simplistic as can be, but they still change over time as the result of interaction with other characters for better or for worse.

Gally and her relationship with Yugo, a young boy dreaming of a life in Zalem, was by far the most interesting aspect of the characterization. Their mutual affection for each other but fundamentally different dreams for the future raised plenty of interesting discussion.

It’s hard to define why exactly this is OVA turned out so well. There are certain moments of excessive violence and the short runtime prohibits any attempt to venture into deeper territories. However, with a most admirable sense of simple but effective characterization, the writers manage to make the characters come off as likeable which makes their struggles and goals much more interesting to watch. Furthermore, the story itself reaches a somewhat proper conclusion which is extremely rare for most short OVA’s that do little more than promote the manga. In the end I’d recommend this, not only to fans of Cyberpunk, but to anyone looking for an enjoyable watch in general.

I might look too cruel with these low scores especially on story and characters wise but hear me out first. I immediately ran and watched this anime adaptation after the original manga impressed me with a great story but what I found was a huge disappointment.

First, the cons ; On manga version of Alita, Alita is actually called Alita since it is her name and you at least expect that it would be the same on the anime version. Bam nope! Now she is called Gally which is also used in the manga but in a total different way(not gonna spoil it though).Moving on to my second problem with this one; The awesome universe that everything happens in the manga version (including; Cultural references, scientific backgrounds, and most importantly the social hierarchy) are so shrinked in the Anime they are barely there. Last but not least, the characters that live in the aformentioned resized universe are also mostly missing and the important stuff they do in the manga are done by other characters which does not really make sense most of the time because these characters have a much different personality.

A/V is fine, fighting scenes are decent, ending song is great but all these pros mean so little with almost no story and missing characters.

Now, To be fair. I have to say that it only has two episodes(that I am aware of) and of course to expect it to offer everything that the manga offered is absurd but also the fact that it only has two episodes is an absurd one. Haven't the producers read all the manga? Or maybe they started making the anime at the same time with the manga and at some point caught up to it(like the first Full metal) I don't know the details of production and if there is something like a cancelation is involved or not. If so I would gladly back off and say "aahh so this was the case forgive me!" But otherwise this adaptation ditches seventy percent of the original story and does not even represent most of the important characters to the wievers.

Now If you read the manga and are curious about ALITA's fighting in real motion, go ahead and watch it since you know the real story  you might enjoy it. If you have not read the manga but want to still watch it.. I guess you can but really won't make much sense you are better off watching something else imo.Overal it is just a feint ghost of what it could have been (man with such universe and great characters it could have been awesome. ).BUT I TOTALY RECOMMEND THE MANGA!!!

Ok, who is the person that decided to give her a name like ‘Gally’? Someone really didn’t have any idea how to create a name. Gally isn’t like a normal girl, she just laughs when someone says she weighs a ton. It’s interesting how she is extremely strong and yet the only thing that was found was her head and part of her chest. She also seems to sweat which I really don’t think that cyborgs need to do so. There are a lot of inconsistencies that make this feel a bit off.

Ido is a freaken jurk. Pretty much when Gally asks to be a Bounty Hunter, he tells her that all she needs to do is stand there and look pretty. It seems that all he really wants her to be is just eye candy at his medical business. And then, he just accepts her as a bounty hunter without any question.

The artwork is vintage and actually rather good though I’m not sure about the design of a couple of the characters. There is one rather large squashed man who I can’t see the eyes of. His face is extremely wrinkled and hard to make out. Backgrounds are a bit Ido has a really odd flat head and looks pretty much like Vash from Trigun. Seriously, you look at him and then you look at Vash and they seem similar. Mouths barely open when people talk and sometimes you don’t see their mouths at all.

Well, the voices are alright in English, but sadly, this seems rather old. Some don’t seem to be even trying. Gally sounds rather off when she tries to laugh, almost forced and Yugo sounds way to hyper for points that he really should be rather gentle on. When the characters shout, all it sounds like is someone reading lines as they shout. The whole argument between them is full of inconsistent highs and lows. The fight scenes are just screams and shouts with no real reason. Gally is rather vocal were every little jump that she does, she has to say something. A lot of characters, Chiren the worst, sound like they are laughing when they are crying.