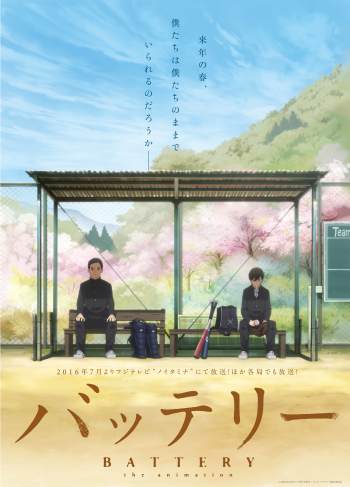 Kawashima Minami, becomes a manager of her high school's baseball team. She's determined to see her team make it to Koshien (the national high school baseball tournament), but the players don't share her enthusiasm. They see the tournament as an unrealistic goal and are content for their club to focus on physical fitness, making friends, and building memories together. To learn more about management, Minami ends up buying "Management: Tasks, Responsibilities, Practices," a book written by Peter Drucker, an Austrian expert on economics and management. She finds that the respected, over 30-year-old text actually gives a lot of information that she can apply to managing her baseball team!

"The world is not going to give anyone any help. So I chose this path. In order to survive." One event, two teenagers. Before they make their decision, what awaits them in their future?

Nakajima was ruling over the class as a "bully." The subject of bullying is a fragile girl, Shirasaki-san. Going as far as violence, every day was horrible. Everyone in the class pretends to not see it. If they stop, then they will be the next target. Nakajima performs "bullying" as if possessed. It was clear that something was wrong. Why does he do such brutal acts? The reality is terrible—

After the sudden death of his wife and child, John Harding spirals into despair. Deprived of his motivation to live, his attempt at suicide is unexpectedly interrupted by the arrival of a friend who wants him to coach the town's Little League team. Can John restore meaning to his life?