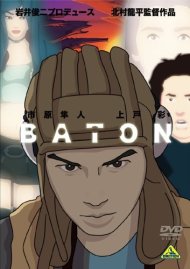 897 users are tracking this. Log in to see stats.

Science fiction, robots, "what makes a human?". These ingredients have been pretty much standard fare in the repertoire of any science fiction writer after Assimov. In Baton, this old formula meets a mix of well choregraphed action scenes, that would make Jackie Chan proud. Is that a winning combination ? Maybe, big questionmark; let's take a closer look. The Story: The story is easily the weakest element of Baton. As stated in the opening, the movie picks up the rather philosophical loaded question of just how human a robot can be. While not a novel topic, it certainly is a good one, rife with chances for conflict and controversy. The Problem is, after picking the question up, it doesn't do anything with it, it just sort of stands there and holds it awkwardly, occassionally pointing towards and saying "this is a thing". "So what?" you say, "Not every movie needs to explore deep philosophical questions, just ignore it." But here lies the movies other problem: When we ignore the "philosophy", there's not that much left. The characters and events just sort of loosely hang together, without any feeling of an overarching goal or purpose, and those connections that exist seem to exist solely to stitch together the scenes, not because the make any sense in the bigger narrative. By the end of the movie it feels like there should still be another 2 hours coming, now that we've finally been introduced to all the characters, but instead we just get a cryptic non-ending. Thankfully, Baton has yet one saving grace: Animation: Rotoscoping, A.K.A. the weird looking one. You begin with a live action movie, and essentially draw over the frames to create an animated movie. Baton uses this technique gloriously, creating a plethora of fight scenes, which in their smoothness, and choreography easily surpass other fighting orientated animes. What differantiates it from just a movie that was painted over, is the fact that the artist and animators make excellent use of the medium, creating strange and crazy looking maneuvers that at times make you doubt where the animation begins, and the acting ends. This is also backed up by an excellent camera work, that goes through a range of motions that simply would be impossible with traditionall ways of animating. A special mention goes to the choreographers, who manage to give each character a very distinct style of movement, which provide far more characterization than the dialogue manages. It has it quirks though: Fans of wire-fu movies will recognize a certain staticness, whenever the characters do longer jumps, or similiar constantly moving scenes, and quite often backgrounds remain suspiciously unmoving. Sound: Not much to say about the sound, for the most part the music remains unobtrusive enough to not be noticed during a casual viewing, and while it does it's job at suporting a scene, it never becomes especially noteworthy. Characters: The characters are.... weird. Each one is decent enough, but all attempts to integrate them in the story sort of fall flat, leaving us with a bunch of decently quirky bystanders. It's not so much that they aren't recognizable, each one having his own little quirks, and as mentioned, movement patterns,  but in the end it still feels like they could have been easily exchanged without the story beeing affected much. Summary: I would reccommened watching Baton once, if only for the relatively novel way it was animated. Sort of the artsy brother of a Die-Hard movie. Watch it for the spectacel, not the substance.