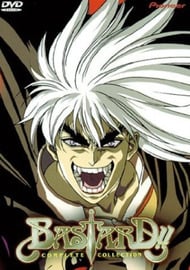 The Four Lords of Havoc have one terrible goal – to awaken the god Anthrasax and recreate the world. To stop them, Yoko, a maiden of Metallicana, awakens the ancient wizard Dark Schneider from within a 14-year old boy by bestowing upon him her virgin kiss. The only problem now is that the most chaotic, lecherous wizard in history resides inside the body of an innocent child. Even worse, he’s determined that neither hydras nor minotaurs should stand between him and his dream to conquer everyone and take the women for himself… all of which is less than convenient when trying to save the world!

StoryOnce upon a time, in a far away studio called AIC, Berserk met Dumb & Dumber and they shagged on a bed of Playboy magazines – in a twist completely devoid of irony, the resulting lovechild was christened Bastard!!. It is the stupidest, most cocksure, most compelling anime I have had the misfortune of enjoying, and I recommend it to all Dungeons & Dragons fanatics not so much interested in strategy as masturbating. All along I was thinking, ‘Why? Why would anyone make this trash?’ I’ll tell you why. Because they knew that you’d read a review similar to this one and be so predictably self-destructive as to want to watch it. Peel away the gimmicks, the gags, the goofiness, and you might find at the core a worm of a plot feebly wriggling away. Dark Schneider the most powerful wizard, er, alive? undead?... is supposed to stop the Four Lords of Havoc annihilating the world. But these bad guys are also his former comrades, so the plot deviates into a lot of back story and character development instead. Most spectacularly, it sprinkles every scene with spoofy sexual jokes varying from common panty shots to more explicit assaults. Lord of Havoc #1, the ninja Gara, captures Yoko the heroine and threatens to unleash upon her a punishment unlike any other. ‘That’s right!’ he announces, ‘It’s SLIME! It will dissolve your clothes slowly before my eyes!’ Follow scenes of her moaning in orgasmic displeasure while goo glides all over her juicy lumps. Admittedly, the anime only recreates a segment of the still-running manga – there’s plenty of unexplained history and the ending is of the ‘to be continued’ kind, meaning the script reads as though it came slap-bang out of the middle. Nevertheless, Bastard!! remains miraculously coherent and even delivers on half-decent characters. The result is that, at its best, it offers genuinely emotive personal confrontations such as the rather apocalyptic lover’s tiff between Dark Schneider and Arshes. Most importantly, it’s goddamn funny on many occasions. I pretty much began writing this whilst wiping hot tears of disbelief from my eyes, not that doing so helped me see this show with any more clarity. All I know is it’s terrible and I like it.AnimationEyebrows like dismembered foxtails, a body chiselled seemingly from granite, and enough hair to make Bon Jovi look like Phil Collins. Dark Schneider clearly possesses great manliness and virility. This is the message being conveyed by having him nakedly parade his assets every other scene, whether in bed with an elf or, yes damnit, in the midst of demonic battle!! Male (hetero) readers should not feel left out, however – the women get frequent turns at the ‘who can undress quicker’ game. From skimpy leotards that ride up smooth butt cracks to the all-time favourite nipple shot. Luckily, the animation depicting the above scenes is far from terrible (it looks good for a 90s show, actually), if rather inconsistent. As if to highlight the spastic attitude of the plot, the animation switches quality on a regular basis. In early episodes it’s horridly Shadow-Skill-OVA-ish; later, it looks Record-of-the-Lodoss-War beautiful with powerful action sequences. Additionally, the generic background scenery would bore the eye if it weren’t for the shiny, shiny magical battles.SoundThe dub is as pleasant as ear-sex with a fork, as harmonious as all the songs on a Maximum the Hormone album played in unison. But for once, I fear the mediocre and exaggerated American acting actually leads to higher levels of enjoyment. For what else do you expect from a corny fantasy but corny acting? The Japanese performances come across more accomplished, which works for the serious scenes (Dark Schneider and Arshes’ interactions are highly convincing, for example), but poses a problem for anyone appreciating Bastard!! for its irreverent humour. With sober actors, the show appears less like a spoof and more like a typically failed fantasy.CharactersAlthough the characters remain staunch archetypes, the script handles them well, offering them many opportunities to poke fun at themselves. Moreover, one or two of the personal dynamics are even sympathetic enough to keep viewers caring when the plot itself is drivel. Dark Schneider, presumably the – ahem – bastard in question, has the ill luck of being locked inside the body of a fourteen-year old. I say ‘ill luck’ because he’s normally a four-hundred-year old letch with a six-pack and magnificent shoulder pads. I expected his characterisation to consist of tiresome scenes of an underage boy toppling into sexual acts with half the women around him. As luck would have it, Dark Schneider remains mostly an adult engaged in sexual acts with all the women around him. What may come as a surprise, however, is that he’s misunderstood. As Yoko follows him from one battle to the next, she also realises that his brain-in-my-crotch attitude masks a heroic spirit. Sure it’s clichéd but the formula works – obnoxious as he is, the character promises the kind of dirty fun everyone secretly wants.OverallKudos to Bastard!! for combining sympathetic characterisation and self-deprecating humour then spraying it all over with macho junk (haha!) in a way that not only disarmed me, but made me want to slide it to the top of my guilty pleasures list. Clearly someone had a lot of fun writing this script (I imagine a small bespectacled loon in a shady studio giggling away at his own scribbles) and no doubt their audience will enjoy just as much dark delight watching the final product. As far as high-octane, trashy entertainment goes, this misbegotten smear of nonsense is the shit. 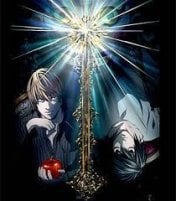 How do i describ this anime?Poorly drawn character, that seem to be reading a script of cheesy lines. The main character is total douche... and well let face it the story line is unoriginial and pretty lame.Also the character in this anime are extremly dumb and naive. I guess it done to add humor to the story but they realy miss the ball on this one.All and all a very disapointing anime. 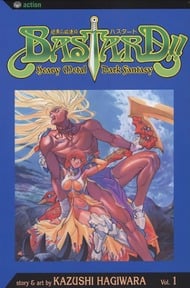