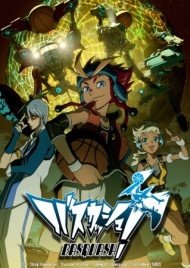 In the future, basketball is played by giant robots called Bigfoots and the wealthy elite live on the moon. Dan JD is a cocky young boy who lives on the planet Earthdash and makes a meager living working as a delivery service. He dreams of someday bringing his disabled sister to the moon to give her the medical treatment she needs. Dan also despises the boring playing style used by official Bigfoot Basketball, so the first chance he gets he crashes a game to show the world how it's really done - destroying the arena and being thrown in jail in the process! However, by the time he's released, Dan's story is legendary, spawning countless imitators who smash up the city in their Bigfoot duels. All Dan's got to do is fend off his rivals, try desperately to keep his business afloat, and aim for the moon! 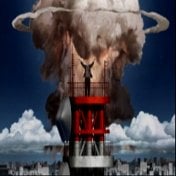 Giant basketball playing robots. That one statement would have been enough to make me turn away from this series in a heartbeat. Thankfully, however, I began this show blissfully unaware of the plot and was able to see Basquash for the quality it had. Admittedly, the basic premise sounds ridiculous and when you throw in the strangest pet sidekick I've seen in awhile and the fact that the sport played can barely be called basketball, its strange that I liked it as much as I did.(story) Basquash's plot is fairly straightforward throughout the series. The protaganist, Dan JD, needs to reach the futuristic society that exists on the planet's moon. Despite its predictability, the story remained fun and fresh to watch. I rarely felt bored throughout the 26 episodes and even though there wasn't any ground breaking aspects to its plot, Basquash was able to provide a quality story.(animation) This is where Basquash really took off for me. The visuals are stunning throughout the series and the use of CGI blended in perfectly with the rest of the show. Not much else I have to say, it looked great.(sound) The sound was a mix of good and average. The openings were your average jpop song and those were delievered as good as a jpop song can be. I especially liked the first ending and the background music was sufficient in helping the progression of the show.(characters) Basquash has some unique character designs, whether it be Nike shoes or mammoth sized mammaries, and a vast array of likeable people. In fact, one of the few problems I had with this show was that I pretty much liked everyone. Their wasn't a signficant antagonist and that made it weaker in my opinion. I'm not going to say that this was a character driven show but Basquash has its fair share of character development and relationships.  I soon found myself immersed in the world Basquash presented and that is a testament to its entertainment. Because once you've got me accepting the use of giant robots to bounce a basketball across cities in a physics denying fashion all in order to ride a giant cannon shot to the moon, you, my friend, have just created a wonderful anime.

story: looking for an exciting story which can keep you engaged, this is what I found when I first started watching this, to me I paid no attention to how detailed the story was I took each episode as it came and always wondered what happened next. i was entranced from the first episode until the 26th and i was still wanting more. Once you’re through the first 3 episodes you become engrossed with the protagonist and then the ecchi jokes begin which put some people off the story, but they don’t affect the enjoyment at all, after another 2 episodes the jokes die down and the story’s development begins again as each episode gets more detailed and exciting with you watching on the edge of your seat as I was and still am.  Animation: The story has its dark moments and brilliant, energetic, colourful moments but I could never complain with the artwork, the design of the character portrait their personality, habits and hobbies giving you a deeper feel of each character. The animation of the story was bright, colourful and eccentric so much that it might be bad for an epileptic. Sound: perhaps the most important aspect of this anime is the sound, I had never listened to J-POP and this brought a whole new sound of music to me I thoroughly enjoyed it. The music in the anime and the sounds used come together so well they make up part of what the anime is about. I enjoyed the music so much later added the song to my phone. Character: so many characters which play such a large role, each with their own backstory adding to the plot. With each character there was something different with hints of romance, what do they want to do next and how each of them feel about themselves builds up the anime. The characters backstory’s follow them through the whole series some more than others with each of them coming to terms as what is their kind of BASQUASH. Overall: you have just heard my own review about the series; I don’t think I could make it any clearer except for spelling and grammar mistakes. But I hope you enjoy watching this anime as much as I did. I loved it. 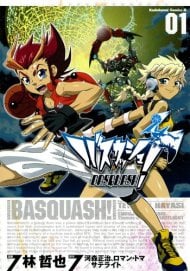