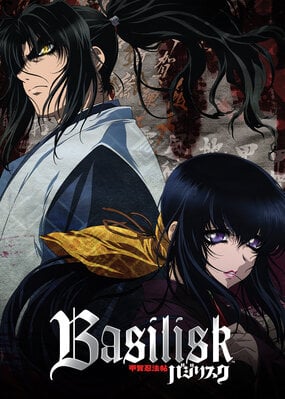 Oboro, a naive, love-struck girl, is pledged to Gennosuke, an idealist. Both are successors to opposing ninja clans with a long history of hatred kept barely in check by a covenant of peace. Just as the two vow to reconcile the clans with their marriage, the shogun orders the feud to resume in order to resolve an internal struggle that threatens to tear the Tokugawa shogunate apart. Even worse, Oboro and Gennosuke themselves are forced to lead their clans in battle. Can the star-crossed lovers resist the brutal circumstances and remain true to their love as the death toll rises?

StoryThose who enjoyed the adventures of Naruto or the violence of Ninja Scroll would most likely pounce on Basilisk faster than you can say kunai. Would those ninja-mongers like it? That’s a tough question. True, Basilisk is a story about ninjas – but it goes deeper than that, and it’s up to the audience to like it for either the right or the wrong reasons. Superficially, the show looks like a regurgitated “Romeo and Juliet” script, except it’s a lot bloodier and forced into a kimono (two star-crossed lovers, opposing ninja clans, hate and filial loyalty, tragic consequences, etc.). Paired with the “fighting contest” idea, in which twenty selected shinobi from both clans drop dead one by one, Basilisk gives off an initial scent of corniness. However, what the anime lacks in an intricate plot it abounds in charged emotion, decent characters, and psychological drama. As the number of survivors dwindles, the series throws in enough twists (among passable yet unsatisfying fight scenes) to keep the intrigue going. Perhaps the show's biggest strength lies in its determination to follow the feud without any favoritism. One watches Basilisk with curiosity but not urgency, with emotional investment but not bias. Each clan has its own perspective; each character has his or her own story. Most strikingly, every character is capable of experiencing equally strong human emotions. For an anime that deals so much with bloodshed and hate, it places a noticeable emphasis on the strength of relational bonds. An entire episode is devoted to the tranquility of times past, showcasing ninjas from both camps (many of whom have died) and the friendships they share with their fellow allies. These moments of peace flash amidst a larger scenario always colored by uncertainty and loss. The old master Danjou states in the first episode, “It is the fate of those born as ninja.” Watching these shinobi die off, one starts to wonder: What is going on in the minds and hearts of these people? Can we understand what it means to be in their place?AnimationBasilisk sports a pleasingly modern style that melds with smooth motion into some notable eye candy. Dark colors, apt shading, and a preference for rain drench many scenes with an appealing impressionistic flourish. Character designs look sleek and human-like, vaguely reminiscent of the designs characteristic of Satoshi Kon (Millennium Actress, Perfect Blue). The beauty of Basilisk's animation does not necessarily cater to the show's simplistic fight scenes, but it does help intensify the pathos of the situation.SoundWhat you hear can sometimes tell you more than what you see, and that certainly is the case with much of Basilisk. The sounds of splattering blood, agonized grunts of pain, and cracking bones are highly evocative, and elements of traditional Japanese music appropriately fit into a restless, eerie soundtrack that seamlessly harmonizes with what’s happening on screen. When the music is able to intensify the plot without the viewer noticing, it has succeeded (as in this case).CharactersWith a starting lineup of a whopping twenty ‘main characters,’ it is understandable how the show would only scratch the surface with most of them before killing them off. Each character is supplied with a few basic traits; as it stands, the script has only so much time to embellish even a smattering of those twenty ninjas. With the majority of the cast, the writers are perfectly content to leave the characters as their stereotypes build them to be, but for the remaining survivors, they do an understated yet effective job of gradually adding inner substance to their personalities. The method’s success with these lucky few lies partially in the basic construction of Basilisk’s story and partially in the story’s execution. As one continues to see certain ninja scrape past death and bloodshed, an almost psychological connection is made: Time is drawn out for the viewer to accustom himself or herself to the survivor, and little by little, quirks and other qualities not seen previously glimmer into view. When that character finally dies, there is a little bit of an emotional decapitation for the audience. In the case of the kunoichi Hotarubi, I didn't even realize her implicit impact on me until her death, as I found myself almost shedding tears over the magenta butterflies floating up into the heavens from her fallen body. And this isn't the only time I felt like crying; a "decapitated" feeling occurred with many characters with which the show only spent an average amount of effort. It’s a powerful, subtle technique that might not have even been intended.OverallThe question still remains: Will you enjoy Basilisk? Don’t count on experiencing any shonen-tastic orgasms from cool fights and intriguing villains, or pumping your fist along with a hyperactive prepubescent main character. Do expect a charged, heavy twenty-four episodes that brings with it a surprising amount of maturity. If you undertake the series for the right reasons, you will not be disappointed. 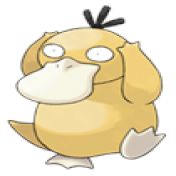 this anime is based off a novel writen in the 1950's and the origional novel was much darker and more... dark... than the anime.some people care about production quality... blah blah .......the production quality of the anime in my oppinion was simply amazing.... and one of the best produced anime i've seen...some people care about the action scenes... blah blah.... the action content of the show is probably the most action i've seen out of any anime... and animated brutifully (brutal/beautifully)the story is themed about the futility of effort... love/hate, peace/war, individualism/patriotism... kinda a "it doesn't really take two sides to tango" theme... seeing as 3 characters get killed from one of the two tribes, while they thought there was a peace treaty going on...the characters (varied a bit from the novel) seemed for the most part logical understandable, and reasonable within their own justification, making most characters to a degree able to be simpathized with.there are only a few "good guys" in the anime, and the development is dynamic enough to make one of the good guys turn completely revenge driven and a more evil than the regular violent grudgeholders like many other characters in the anime.the bad guy is one of the most evil and brutal bad guys in any story i've checked out... if you ever have a problem in a story because its badguy is either incompetent, or just not that bad... this bad guy is horridly evil.  i even had to stop watching the anime for a bit to take a break durring one of the parts.anywho i thought everything was done great, and the only reason i didn't, and will not give this anime a 10/10 is because of 2 things... aside from a few characters i found annoying to the point of being insane (which doesn't really bother me much... because their insanity/being annoying was understandable)... but there were a few scenes... especially towards the end of the show... that had me taking a break due to just how brutal it was...P.S. people relate this to "naruto meets ninjascroll" and yep... if you have the tournament at the begining of naruto + naruto look + the graphic violence of ninjascroll... you pretty much nail the action scenes on the head. 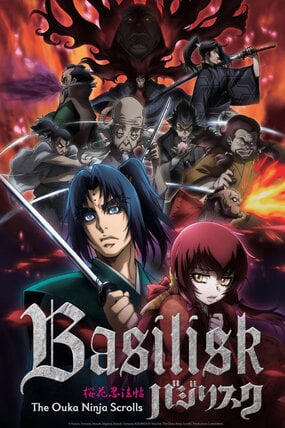 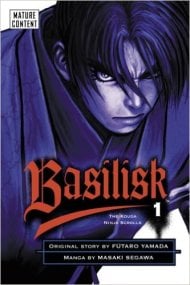