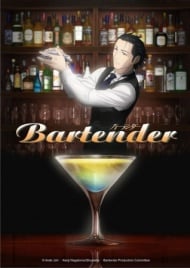 Story Bartender is an anime series that takes an acquired taste to appreciate: its progressively engaging slice of life premise is unlike most anime series that are either exuberant in tone or use emphasized elements to tell their respective stories.  Instead, Bartender takes its time to immerse you in an environment that's enticing and seductive in its own undertones. Like Antique Bakery for pastries, or Yakitate Japan for bread, Bartender immerses you in the world of alcoholic beverages with a mature flair.  Only...it doesn't quite invest in the same humor or flares that define the series aforementioned. I might be among the right audience for this series, in that I enjoy progressively paced slice of life series that indulge in a central theme, and don't mind if it has an episodic progression if the themes in each are tangible and relate well to each other.  While I've never consumed an alcoholic beverage, I felt enticed by my watch of Bartender, in that it features a rather soothing environment and intuitive approach to the occupation with a charismatic bartender and a multitude of characters who wish to escape their dilemmas, shown in each of the 11 episodes this series highlights. The idea that a choice of a drink can characterize a person completely reeled me into the respective story and up to its rather noted conclusion, though if one is expecting something to culminate into a conflict or central resolution, you are definitely NOT the audience for this series to be able to appreciate it. The problem also lies in that it is a series that you really have to be in the right mindset to watch it, otherwise, its affect is lost and those who are looking to be easily entertained or engrossed may find it quite dull. I personally thought it was one the best character expansive/philosophical series I've come across in a long time, and literally most series don't give the kind of depth and intricate expansion that this series does, with a soothing flair and at ease progression that takes its time accordingly.AnimationVery high quality character designs and coloring, as well as depth to the environments that are just as soothing as the tone the series sets.  The light/dark contrasts are easy on the eyes and the designs remind me of series like "Monster", "Master Keaton," and "Human Crossing" for fair comparison, if a bit more rich in quality. (Yet I should note the only one this series remotely resembles in tone and progression is "Human Crossing.") Settings are quite realistic in design and intricate details, even from the sculpture that's showcased in one of the early episodes. I was impressed even with the level of detail in the wine bottles and the cocktail glasses. SoundBeautiful soundtrack overall, I'd honestly put it among my favorite anime soundtracks for its calm, jazzy quality.  The opening theme is an enticing number called "Hajimari no Hito" by a prominent jazz group called Natural High.  The showcasing of the various characters in the dynamic opening sequence invites you in its mature, moderate tempo song.  The ending theme "Bartender" is just as elegant, and the BGM provides a nice accent to the environments and situations in which the characters are showcased. Voice acting is appropriate though it isn't so much a factor that improves the series.  Rather, it complements the characters and situations in its own right. Characters There are an array of characters that are showcased throughout Bartender in the episodic array of episodes, each dealt with an intricate manner of how their back story, personality, or respective situation matches the respective beverage of choice.  The series treats its characters intricately, but doesn't really develop them over a progressive time where you come into resonation with them individually.  Rather, you learn to appreciate who they are in an aesthetic, philosophical notation. Don't come into this series expecting characters to jump out at you, because while its characters drive it, it's done so in a way that's different from most anime series.  I'll compare it to Human Crossing again: a series of stories in one-shot context that revolve within a central theme. If you can keep that notation in your mind as you watch, or you like series that are in that vein, you'll find yourself enjoying it for what it offers. Yet, in the midst of it all, I was impressed with the character Ryu Sasakura, who acts as your "friendly neighborhood Bartender" with an eye that can see the core of his customer base. He has an awareness of who they are, their personality and what to match along with it, and he does so with a kindness and ease that's both attractive yet subtle.Overall It pains me a bit to not rank this higher than its respective measure, because I truly loved the series for what it had to offer, but this is one that I wouldn't recommend every anime viewer to watch, only those who can truly appreciate the elements it brings to the table.  It's a beautiful series, soothing to the senses, and provides an educational look at the occupation, but I would say if you love series with progressive pacing and a different flair than most anime series, then this is one to watch. Likely, if you've ever seen the series Human Crossing and loved it, then you'll definitely like this.

A friend and I decided that we wanted to watch an anime together and, due to the great reviews we had seen for this, we decided to give it a go.  I was completely let down and I genuinely expected more from this anime than a bunch of heavy handed metaphors that were the base for each episode.   Story:  The concept the story started with was pretty fun.  At its core, this show is about the numerous people that come into a bar, Eden Hall, and leave with a lesson well learned from the Bartender who works there.  The creators didn't have to push the concept as hard as they did.  I felt like the irony of the situation and the terrible metaphors were being shoved down my throat.  Around the third episode of the show my friend and I decided we needed to start doing whipped cream shots every time we heard a terrible metaphor.  That was a lot of whipped cream.  I am going to give some examples.  In episode two Sasakura, the bartender, asks the woman who walks in if he can get her a menu.  She replies that he can help her find "A menu of the heart."  My friend and I had to rewind this part because we could not believe she had just said that.  In episode 6 the phrase "flames of passion" was being thrown around like it was the most natural line of dialogue in the world.  It was incredibly halting for the story line since we kept missing things due to our laughter and having to rewind it.  The dialogue was this horrible throughout the whole anime.  It didn't feel natural, like average people talking about their problems to a bartender.  It felt like the creators beating a terrible metaphor to death throughout the course of an episode.  Ultimately, the fact that I could feel the creator’s presence behind this whole anime was incredibly irritating to me as the whole show felt like their extensive monologue.  One major plus I will give this anime is the history behind the alcohol.  That was genuinely interesting and incredibly entertaining.  Every drink that went along with an extended metaphor would get a historical explanation.  I genuinely found that to be the most interesting part of the show.  I probably would watch a show on the history of alcohol so I thought that part was excellent.  Furthermore, I really enjoyed how the ending credits were individualized to show the episodes main drink being prepared by a live bartender.  That was probably the best part of the show in my opinion. Animation:   I feel like I need to split the animation into two categories.  Firstly, to get the negatives out of the way, the character animation was incredibly poor.  Their movements were very choppy and somehow seemed to defy the laws of physics.  For instance, in a shot that is used repeatedly in multiple episodes, Sasakura is shaking one of the numerous drinks.  His forearms and bangs are the only things that seem to move but the fashion in which they do is so improbable.  They treat the shaker as if it is creating such a vacuum of wind that his bangs would move along with it and not as if the force against his body of the shaking would cause his bangs to move in the opposite direction.  Little matters like that piled up so all of the characters actions just felt bizarre. Furthermore, for an anime that bases so much on emotions, the expressions were far too stiff looking and didn't even seem to fit the scene.  Moving on to the positives, the background animation was stunning.  Any time I would see the row of bottles on the shelves I couldn't help but admire the amazing job that the animators did with making each and every individual bottle look real.  The same goes for pouring the drinks.  The animation of the liquid was smooth and flawless and it was obvious that the creators had done a lot of observation on how liquid would pour.  In the end, the pairing of the prop and background art with that of the people was bizarre and felt like it didn't mesh.  I only wish that the people had been animated better so I could give this a higher score. Sound: The music was actually pretty good.  I loved the opening and ending themes. They were catchy but also caught the laid back nature of the show.  The music in the anime scenes itself was alright but I will admit that I didn't notice it much.  I would say that the music was well done but nothing I would rave about. Characters:  Don't get me started.  Sasakura could have been such an interesting character if he had been developed more.  I don't think that he needed more of a backstory than we got but I felt like his personality should have been developed more in the moment.  His attitude seemed to stay on one level throughout the entire show.  He almost didn't feel human.  It got to the point when my friend and I thought he was an alien who had come to earth to learn the ways of humans.  The rest of the characters were just as two dimensional.  The creators obviously developed one level of "deepness" for every character in order to give all of them a problem that the Bartender needed to help them solve.  There weren't any characters in this show that I would believe for a moment. I wouldn't recommend this anime to anyone.  There were good aspects to it but I didn't feel that the good parts outweighed the bad.  Unfortunately, Bartender was a letdown. 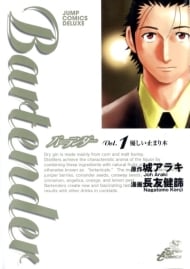