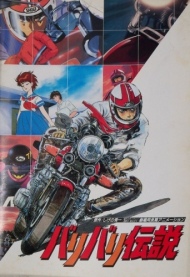 541 users are tracking this. Log in to see stats.

Part 1 is basically an introduction of the main charactesr and how they unite, and part 2 is mostly driven by development despite being mostly dedicated to the race in Suzuka. I’m guessing you need some familiarity with the manga to get some idea of what’s going on more directly, maybe such as why Gun races on motorcycles and why he obtained such skill. Gun and Hideyoshi just have your typical rivalry like Inuyasha and Kouga from that respective anime and it’s mostly used for comic relief. Ai seems to be more of the token cute girl, and Hiro is there to help Miyuki, while Miyuki was just the token fan service girl with some descent substance. But if anything is going to stick out to you, it’s definitely going to be the ending. I can’t describe it, you’re going to have to see it for yourself because it totally affected me and took me by surprise. Even though there is limited material, it does a descent job of making you care for the characters and the foundation is good enough to understand their characters and to produce development. Well, the art style does somewhat resemble some of the character designs in Initial D, but during the publication of this manga, Morikawa Jyoji, the creator of one of my favorite mangas, Hajime no Ippo, was a staff membe,r and I really see more of his style in this anime than really the Initial D style except for Gun’s character design with the way Shigeno draws diamond eyes to make them slanted in an Asian style and he tends to draw faces at a slanted angle as well. But there are some 1980s characteristics of Gun such as the semi-big hair. The rest of the designs are really just generic and that’s it. I mean, the way Shigeno draws his lips sometimes is not yet prevalent and I guess he hadn’t established his style like that yet. But the way Morikawa draws the eyes and how he draws rectangular faces at times seem to be more present so I’m guessing the way Shigeno did things during this time was a major influence in Morikawa’s style. For the races, there’s really no novelty environmental factors that really make any impact on the race such as gutter gripping, but what makes up for it is that risk factor I talked about in Wangan Midnight. The races are portrayed accurately with the designs of the motorcycles, the postures, the steering and everything. When you see the races in a more 3rd or 1st person perspective, you can see the road and the rest of the foreground and track zooming in on you as if you were driving yourself. Granted it’s 1980s, I think it bring a genuine sensuality to the races. As for Suzuka, you might be able to recognize the name from the Gran Turismo games. What's cool is that it times it does give an aerial view of the course, and you'll be able to recognize it from the course maps. But back to the risk factor, there will be some wicked crashes, so if you want to see some crashes, check this out. Despite this being an unknown anime, the featured seiyuus are pretty big names. Starting with Hideyoshi’s seiyuu, Nakao Ryuusei, the voice of Freeza from Dragon Ball Z. He does speak in Osaka dialect, but he doesn’t have the authenticity to the aggression and accent as the voice actor of Sendo does in Hajime no Ippo. But I think the voice does contemplate his small size at some capacity like how it did with Freeza. And Gun is played by Tanaka Hideyuki, the voice of Enrico Maxwell in Hellsing and Rayearth in Magic Knight Rayearth, I thought he had a good deep voice, but I thought his performance based on how he was written was of course more one dimensional and I thought he sounded too old. Next Miyuki, our pink haired cutsey fan service racer played by Toda Keiko, who is probably most famous to Gundam fans as the voice of Matilda-san from the original Gundam series. She does an excellent job as playing a more cutsey and innocent girl, but with an adrenaline edge at times. The last seiyuu I want to get into is Ai, played by Jpop sensation Oginome Yoko, who also sings the theme songs. The theme songs are very upbeat in an 1980s manner, and the singing is a little feminine but energetic. Though the music isn’t really Eurobeat nor is it really close to the nature of the soundtrack of Initial D, the music ranges from all kinds of beats and styles whether light hearted sounds or intense guitars to set the atmosphere of a funny scene or a last mile race. Well, I found this anime interesting enough to hope that one day I can get my hands on the manga. I would like to know what parts of the manga I was reading as well so I know where I am to understand some of the foundations that are going on. Also, I would like to see one day hopefully a remake of this series because I personally like realistic anime nowadays. I enjoy the careful use of risk factors, and the interactions and relationship developments. But I personally recommend this more for people already familiar with Initial D mostly because it’s by the same creator, so you get some understanding of what he does and why. I also recommend this to Hajime no Ippo fans mostly because of the character designs. I mean, doesn’t Gun resemble Miyata? And to conclude, if you know where you an get the manga, hook me up.

Here's something that'll transform your average evening into one full of adrenaline and tears. Motorcycle Legend has so much to offer yet hardly anyone knows of it! It's a stand alone film that goes beyond simple brain candy. It's a brain feast. The story itself ain't novel, but if you do a cliché well it can still turn into a worthwhile film. I enjoyed the dynamics between the two main racers, where a punch to the gut is a hello and they never get along. They're cute, and badass at the same time. I'm also a simple sucker when it comes to gang and street brawls, bullies getting it handed to em, and the reckless novice mc trope. This has it all - and then some. They somehow squeezed some feels into a motorcycle movie, which caught me way off guard and now I'm... recovering. But that's good!!! We like to be emorionally torn to pieces, don't we Gen Z? Finally, the animation alone would be enough to give this a try - they really put the effort in to create a visual experience that would make you feel like you are in the position of the riders going 9000 mph. The 1st person shots were so beautiful, intense, and smooth!! Gah, I want to eat them with a spoon. It's rough edged just like Gun's awkward moodiness. 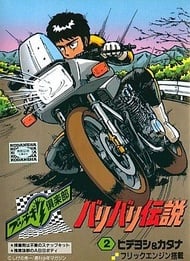 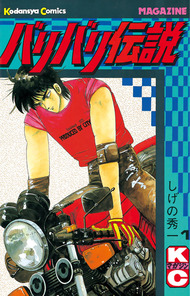