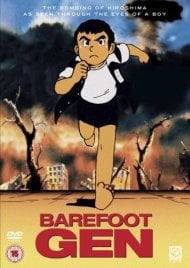 The year is 1945, and the Japanese war effort is grinding to a halt. In Hiroshima, the Nakaoka family is working hard to survive in the midst of poverty and persecution. With his father constantly working, six year old Gen has been left in charge of his family, yet stays relentlessly optimistic in the face of hardship. Then, on August 6th, the atomic bomb Little Boy detonated in the center of town, and the people's lives were changed forever. As Gen struggles to cope with the horrific event, his youthful innocence and refusal to give up brings a renewed sense of hope to those around him...

Not for the weak of heart, and I don't think I could watch more than once. I cried a lot! It's a slower paced film, you can really tell it's an older one. But it does a beautiful job showing what it was really like when the bomb fell. Heart wrenching and reminded me of Grave of the Fireflies.

Story - 10/10 - A thought provoking, highly emotional tale, made all the more distressing by the fact that it's a true telling of one man's experience. Barefoot Gen is a 1983 anime based on the manga of the same name by Keiji Nakazawa. It is set in WWII Hiroshima, Japan and tells the true story of Nakazawa's experience of the bomb which hit Hiroshima on August 6th 1945. Gen and his pregnant mother survive the bombing by sheer fluke; unfortunately their family aren't as lucky. Now Gen must brave the eradiated landscape of Hiroshima and find a way for him, his mother and his newborn sibling to survive. The plot is very typical of the Japanese style of war movie, focusing on the suffering of the one character, a civilian who has done nothing to deserve what they get. It is well scripted, with a lot of the most important things being shown rather than said, creating a much more provocative film. The fact that this is a true to life telling of the Nakazawa family's experience, released to the public by Nakazawa only after his mother's death, only makes it more harrowing to watch. It's an informative and satisfying plot which will move even the toughest anime fans to tears effortlessly. Animation - 7/10 - A style indicative of the 80's. Good for its time but could do with a re-master. Barefoot Gen came out in the 80's and that is evident in the animation style. By modern standards, it's clunky and rough with an acceptably bleak palette of mostly blacks and browns (for obvious reasons). Though the film may sound badly animated, it is far from it. The animation is great for the time in which it was released but it is no secret that this film would greatly benefit from a visual re-master. Sound - 7/10 - A little on the rough side. Voice acting not always as solid as it could be. The sound, very much like the animation, may sound a little rough but that is purely down to the age of the film. It would, again, benefit from a re-mastered edition. In terms of voice actors, the Japanese voice cast make a fantastic job of bringing the characters to life, though there are occasions when the voice of Gen's younger brother, Shinji, can grate on you. Characters - 9/10 - Very real characters. Maybe a little too real. The characters in Barefoot Gen are all based on real people and this really shines in the dialogue and the general depth of the characters. While a large portion of the film is Gen on his own, the earlier scenes give the viewer an opportunity to peer into the normalities of the lives of a struggling family in WWII Japan. The sequences with Gen on his own or with his mother still show a fantastic diversity in the characters and a level of humanity that is unsurpassed by more recent anime titles. Overall - 9/10 - Informative, emotional, the most bittersweet movie you will ever see. Barefoot Gen is depressing. It's meant to be depressing, but with an uplifting message of hope and the indomitable power of the human spirit. It's a not so subtle reminder of the evils that we inflict upon each other and the pain that war brings to the most unassuming of lives. A heart wrenching tale that sneakily teaches you about the 2nd world war, whilst reducing you to a blubbering mess. It's a real challenge to watch this film without crying, and if you can manage that much - then you have to try not to feel guilty for not crying. 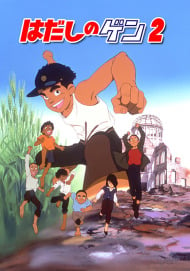 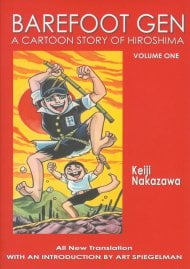