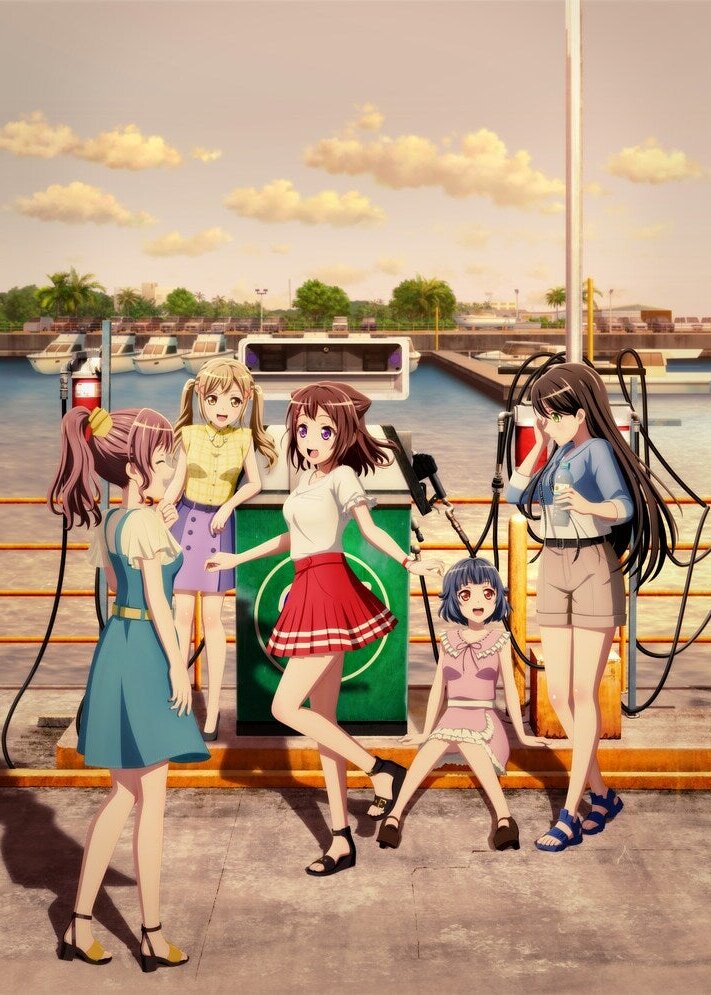 Poppin' Dream was Poppin' Party's contribution to the BanG Dream! 2021-22 musical rush.  Two Roselia movies, the second Film Live stage performance, and the Morfonication movie brings on the new wave of girl band mania after the Budokan concert that ended the third season.  What could have been seen as the climax just seems to be the calm before the new storm.

In fact, the movie Poppin' Dream begins at the point of that premier gig which pitted Roselia, Raise a Suilen, and Poppin' Party against each other.  That done, what to do to top that?  Simple, a charity concert in Guam.  Roselia bows out, having their own dreams and goal, but RAS and Poppin' Party takes on the task of playing overseas.

The plot revolves around the simple concept of what just might go wrong in doing an overseas concert.  Passports are an issue.  Motion sickness.  Kasumi's sudden discovery that she has a fear of flying.  Lost luggage.  Lost girls.  Language issues on English-speaking Guam (not an issue for Anglo-fluent Chiyu Tamade, but you haven't laughed until you listen to Kasumi butcher English).  Fear of sunburn.  Lost and injured drummers.

Get by all this chaos and enjoy the concert.  Three groups offer the tunes.  Morifonica with their symphonic style.  As the girl band newbies, they feel the nervousness of going on first (due to RAS and Poppin' Party having their drummers stuck in a hospital tending to Masuki's ankle (sea cucumbers ... the devil's lapdog).  But Morifonica's violin sings and the band rocks.  RAS has the background percussion on record, but Poppin' Party lacks that technology.  Still, this is the irony of the first two seasons of BanG Dream!  A race against time to get the band together for a performance.  But pros know how to improvise new material on stage.  RAS rocks with Going Crazy.  Poppin' Party concludes the concert with a set of three songs, from new material as Breakthrough to a sparkling version of the song that graced the opening theme to season one.

Give a concert and let Sanzigen do its animation magic.  While the island scenes are crisp and colorful, the concert stage is a laboratory for CGI-magic.  Sweeping pans of the stage.  Spectacular angle shots (stationary and motion) of the performers.  Tight synchronization of performance action to sounds produced (extremely difficult if MASKING of RAS is in her zone ... and she is in her zone big time).

But the biggest animation effect is the salute to the stars Kasumi arranges just before the last song,  Douse all lighting, and let the eyes adjust to a glorious depiction of the Milky Way above the concert venue.  It's all a tribute to  Kasumi's inspiration for playing her star-guitar.

The girls of Poppin' Party wonder what will become of their band once the gigs are done.  To play on and on ... that's the gist of Poppin' Dream.  That's the hope for all those BanG Dream! fans.  Rock on, girls!