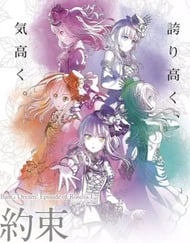 521 users are tracking this. Log in to see stats.

Episode of Roselia - Part 1: Yakusoku (Promise) has all the aspects of an origin story.  And it begins with the picture of lead singer Yukina Minato with a beaming smile (circa when she was about a five-year old).  Needless to say, something happened to have changed her into the overly-serious, never (or perhaps hardly) smiling wannabe rocker.  And it had everything to do with her talented musician father ... who suddenly dropped music from his life.  This movie begins the process of finding out why and restoring the balance to Yukina's quest for music excellence. The slow welding of the five girls with diverse personalities into the premier band of the BanG Dream! franchise was predictable, as was the eventual failed performance and the soul-searching that such a reversal will cause.  Yukina and Lisa are childhood friends, neighbors who just seem to be polar opposites on the emotional spectrum, Yukina wooden and stoic, Lisa bubbly and energetic ... with self-doubts about her fit as Roselia's bass guitar player.  Sayo (guitarist) has the same rough-edged professionalism as Yukina. But Sayo strives to be the guiding star for her sister Hina whose own career as a member of Pastel Palettes seems to move her beyond big sister's influence.  The first years Ako (drummer) and Rinko (keyboard) have the same interests (video game play) but hardly the same personality.  Ako (brash and optimistic) and Rinko (soft-spoken and insecure) struggle to remain in the band, Ako because Roselia is losing that je ne sais quoi which made practices fun, Rinko because she underestimates her skills at the piano.  The band is on the edge of failure and disbanding, and Yukina's dream of playing at World Freedom Fest could be destroyed before they get a chance to begin. Yakusoku has a bevy of chronology problems dealing with the other bands in the BanG Dream! series.  When Roselia flops at an important performance, Yukina tries to discover the missing magic which kept Roselia strong.  She finds it by taking in a Poppin' Party concert.  Uh, I thought that Roselia was the well-established group when Poppin' Party struggled to create their own concert (BanG Dream! Season Two).  At that time, Poppin' Party was clueless, and Roselia had all the answers as the foremost girl band on the circuit.  They could not be falling apart and having Poppin' Party be the glue to help Roselia get back to peak performance.  Also, Sayo's relationship with Hina seemed like the older sister was worshiped by the younger, who was gaining success as a singer in the idol-formed Pastel Palettes.  Plus, Roselia was striving to make WFW in that year (so Lisa hopes).  And throw in the Budochan concert of season three.  Not enough time, and timing and integration is important. As with the second part of the Roselia movie, we have serious dialogue issues.  Analytical.  Way too analytical.  So much esoteric thought processes going on about the five different girls arriving at the same conclusion that each one loves Roselia (the missing ingredient to Roselia's success).   Boring!  You hope to see how the girls finally gel and learn the subtle secrets of why they wear the time-piece motifs on their costumes (and why the second Roselia movie opened with Rinko performing on the piano in the clock tower).  But you have to be a hardened Roselia fan to enjoy this special.  I'm more the cheerful, fun-loving Poppin' Party fanatic. As for the animation  ...  I've seen better BD projects.  True, the sound/movement synchronizations were quality in this 77-minute piece, more so than Film Live!   There were moments as with the musical performances and one stretch near the end. Lisa’s  realization of the power of the music Roselia is a flash of blue monochromatism.  For the rest, the typical flat color schema of the five girls who seem so bland until they don their gothic costumings which usher in those dark segments of the movie.  Maybe it is the dark aura of Roselia which steals the fun out of the movie. But, when evaluating the Episode of Roselia Part One vs. Part Two, there was more life in the second show than the first.  Yakusoku seemed only developed just set the viewer up to get a better jist on what will go down in part two.  If I hadn't seen part two first, watching part one could have just killed any desire to take in the second.  It's not a bad movie, just slow.  But you must know the Roselia mindset to get along with the non-action.  It's the music that moves Roselia, after all.  The intricate interactions between all the personalities just went along for the ride. 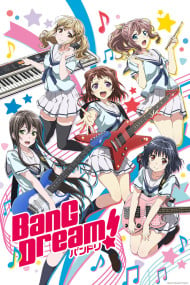 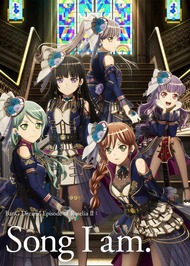 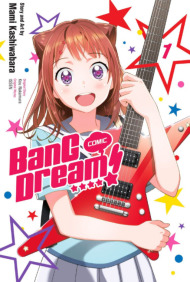