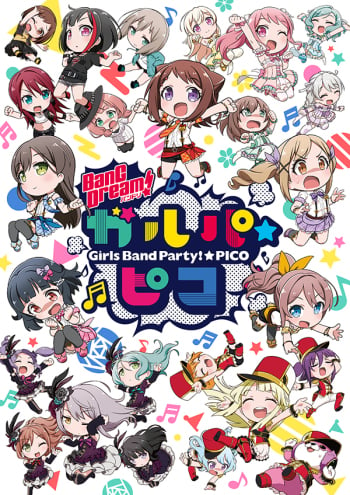 It is a good thing the corporate body of the BanG Dream Project has a funny bone.  Honestly, there are times BanG Dream! is more along the lines of BanG Drama.  Season One:  Poppin’ Party works to be recognized as a legitimate girls band.  Season Two:  Poppin’ Party works to organize a self-sponsored concert, a feat they had no clue how to conduct.  Season Three: Poppin’ Party battles not to be mashed into dango balls by a girls band bent on eliminating any girls band standing in their way in musical competition. This is why I enjoyed the lighter fare of BD!: Girls Band Party! Pico!  Twenty-six three-minute short features in chibi-style about the misadventures of five BanG Dream! Ensembles:  Poppin’ Party, Roselia, Pastel Palettes, Afterglow, and Hello Happy World.  Just five teams of rocker-gals who just want to have fun.  Wickedly bizarre fun, but not a stitch of drama in the whole arrangement, involving wildly imaginative scenarios. Rimi of Poppin Party enjoys chocolate cornets a bit too much.  Now she is turning into a chocolate cornet.  Now her bandmates are coming to console her … or, is it to consume her? Pastel Palettes enter a swimsuit contest which turns into something that is a couple of rules short of being a rendition of Rollerball (come on, kiddies.  Do a Google search on this one!). Yukina, lead singer of Roselia, gathers a set of stray cats en route to a band practice, in spite of her feelings of stoic indifference.  Her bandmates also are dedicated to perfecting their unique style committed to the darkling enhancements of their brooding gothic serenades celebrating the eerie convocations of explicit horror (and that, Ms. Ako Udagawa, is how in a single straining breath you … um … inspire the macabre).  They ask Yukina to get rid of the felines, but in a later spurt of compassion go out to reclaim them.  But, all they can find in one vocalist-guitarist whose catty coiffure marks her as the next best thing. Misaki of Hello Happy World wishes to hide the fact that she is Michelle and has her lead-singer Kokoro create Michelle World where Misaki can slip in and out of her Michelle outfit and hide among the bajillion other Michelles. Lots of wacky situations as this.  But there is an over-riding centerpiece which holds all these episodes together.  Marina, manager of Circle Live Venue, announces that the place is shutting down because the building’s structure is becoming so fragile that Circle is falling down (falling down, falling down).  Foot-stomping and doing a drum roll of the wall causes fracturing and ceiling tiles to tumble.  The girls plan for a final concert to declare their appreciation for all the memories there.  But the strain of the performance gives the coup d’état to the venerable site, leading to a sudden phoenix-like re-emergence of a new, improved Circle in a spray of … well, that would be telling. That’s it.  No drama, all in the spirit of mindless fun.  Sad to say, the music is limited, and the chibi renditions take time to figure.  Still, an amusing look at a cult classic in the making. 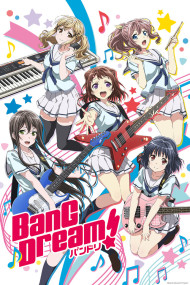 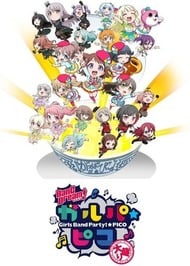