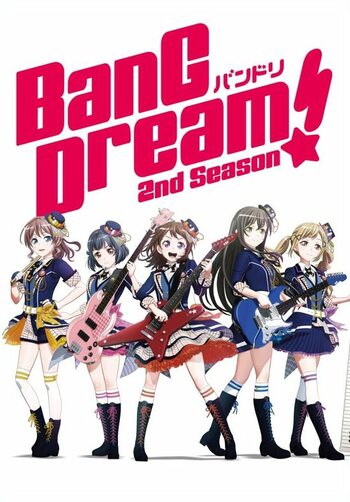 The premise of BanG Dream! Season One centers on Kasumi, a girl filled with whim and impulse, who finds a star-shaped guitar and desires to form a band.  With the help of four friends, and, after overcoming a load of obstacles, her band, Poppin’ Party, plays their first main venue.

Season Two expands the girl band horizon, but it still begins with impulsive Kasumi who commits her band to organize a self-sponsored show, a matter that is so complicated that it is still daunting to think about all the decisions to make, all the details to master, all the stress to overcome just to accomplish the nigh unto impossible.  But with a little help from a lot of fellow girl band members, episode 13 is a rock fest to remember.

And the key is the competition.  Each girl band introduced offers some feature that brings the music together.  The cast of performers:

ROSELIA:  The members are older members of the high school the girls of PoPiPa attend.  They had their own self-sponsored show at which Poppin’ Party performed, and Kasumi was inspired to host her own.  But the lead singer and artistic force Yukina coolly dismisses Poppin Party as too inexperienced to create their own show.  They do lend a hand and give sage advise to help Kasumi along toward her goal.

PASTEL*PALETTES: A band which began in fame and infamy.  Accused of lip syncing their debut performance, the girls pledged to improve as they were allowed to do their own material.  But bassist Chisato is an actress and keyboardist Eve models.  Finding time to practice and hone their material can be difficult.  Scheduling and keeping commitments are their forte.

AFTERGLOW:  Five girls who were close friends in elementary school found that they drifting apart in middle and high schools.  Being in a band is their means of keeping together.  But practice time comes only late in the day.  Noting that practice comes after sunset, the girls chose Afterglow as their band name.  The loyalty of friendship is the talent they share.

HELLO HAPPY WORLD:  A girls band with a philanthropic zeal.  Formed to play at pre-schools and children’s hospitals, HHWs goal is to make the world smile through music.  Lead singer Kokoro is from a fabulously wealthy family, and Kokoro uses these assts to perform theatrical miracles at their performances.  Noteworthy is Michelle, a performer/DJ who dresses in a panda costume … or is it more?  Michelle sems to be a cross between the Six Million Dollar Bear and Iron Bruin.  With Kokoro’s fortune, she probably is.  HHW has a gift for optimism which sees them through difficulties.

RAISE A SUILEN:  The force of evil in the world of girls … no wait!  Too much drama here.  Let’s just say that RAS is an up-and-coming band with a vision of reshaping the world of girl bands.  Formed by musicians who have been scouted for their talents, they are led by CHU2, a producer with a fiendishly despotic character that which desires to sweep all before …  Drama-o-meter going off again.  Again, let’s say … Do you remember Ichigo Moesaki from Sore ga Seiyuu?  The Strawberry Princess from the Strawberry Planet?  Glorious strawberry blonde with a bubbly disposition?  CHU2 has the same hair color, converse personality.  Moesaki was calculated crazy.  CHU2 is just power-mad.  The group will partake Poppin’ Party’s show as part of the audience.  But, in the third season, CHU2 promises to pulverize all girl bands that stand in her way.  She had threaten Roselia for refusing her proposal to be their manager.  She tried to steal Tae from Poppin' Party.

The music is a rush, but unfortunately, the words are not subbed.  Pity.  New material, new videos sweep away all memories of the original hits of the first season.  Such vivacity to constantly re-invent, to out-perform all prior performances.  It makes BanG Dream a flirting with excitement on a weekly basis.