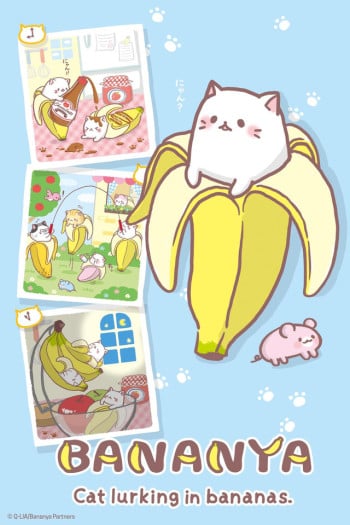 Meet all of Bananya's adorable friends!

The Kitty Who Lives in a Banana

Bananya and the Mouse, Nya

Bananya and the Refrigerator, Nya

Bananya in the Middle of the Night, Nya

Bananya and the Stray Cat, Nya

Bananya in the Bathroom, Nya

Bananya and the Balloon, Nya

Donyatsu is a cat-like, chocolate-coated donut creature living in an abandoned Shinjuku, Tokyo. Lots of strange fun with his yummy friends! Tastefully funny short stories with brand new characters not seen in the original!

Cat doughnut. Cat banana. I'm sure you see the similarity. Both of these short anime follow the silly and cute adventures of a part cat, part food character.

If you like anime about cats that are food too look no further than these 2 amazing titles. Sure to please the cat and food lover in you!

Cats as food - what's not to like? There isn't much of a plot with these two, and the similarities are fairly obvious.

Both anime's are about cats and are both adorable! The series are short, so when your bored you can check both out.

I highly recommend this to anyone who enjoys watching cat-like creatures get into silly situations.

It's a basketball! It's a melon! It's… Poyo the cat?! After drunkenly stumbling across the bulbous, cuddly creature on the street one day, Moe Satou decides to bring the stray home and keep him in the house as a family pet. Whether he's lounging around or bringing snacks to the other strays in the neighborhood, Poyo is always getting into a variety of...

Lovers of Bananya, the kitty who lives in a banana, prepare to fall in love with Poyo, the melon-shaped cat!

Both are cute short series following the story of cats, they are both heavily focus' on short sketches and involve basic character designs. There is also the face that they are both light shows and enjoyable if you want something easy to watch after seeing something a bit more serious. So I recommend if you like the plain cuteness of one of these series then check out the other, I'm sure you won't be disappointed.