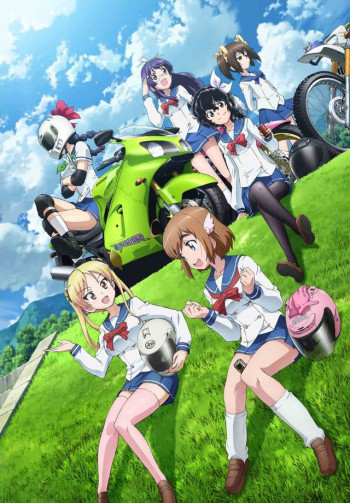 The two episodes of the Bakuon!! OVA are noteworthy in that they are improvements to the original episodes to which they easily could have been added.  A solid fourteen-episode season as opposed to an iffy twelve.

The first episode deals on Onsa's dream to lead the Motorcycle Club on the quest of the 'Hundred Mile Blend,' a visit to a coffee shop suggested by Onsa's dirtbag father.  Now, the series did have a much more ambitious tour to the northern edge of Hokkaido, the furthest edge of Japan.  It dealt with the extremes of driving in inclement weather.  It also led to a bizarre meeting with their high school teacher and resulted in near attempts at lesbian rape.  The OVA's episode was simpler.  In 24-minutes, Onsa's motto of 'patience is romance' is pushed to the limits by stopping for coffee at a gas station, destroying a model Suzuki Katana (and Rin's morale as well), and the girls' questioning Onsa's zeal for weird treks to nowhere.  The coffee shop was a bust, but Hane saves the day by finding a hot bath where Rin's famous Suzuki 'S' is on display.

The second episode deals with Hijiri's effort to gain her motorcyclist license.  This focuses on Hayakawa, the butler, who acknowledges that this means no longer taking his lady in the Ducati sidecar, a marvelous machine that breaks down and is replaced by helicopter support.  Such is the lifestyles of the rich and Hijiri.  But the elderly Hayakawa is mysteriously replaced by a girl from his youth, a girl who is as gifted in driving a motorcycle as Raimu.  Hijiri, upset that the mystery girl is stealing her thunder, drives off.  Raimu goes after her, but she is out-performed by the mystery girl on the Ducati.  But it is the butler who finds Hijiri who has allowed her motorcycle to fall and is struggling to right it.  The faithful butler advises her how to lift the heavy bike and acknowledges that his time of service to the young miss was over.  A blend of sublime and supernatural.

Still, there was that risqué element in Bakuon where the female figure gets over-exposed.  There is that feature of ecchi which lurks in the background.  Much like the girls modeling with select classic motorcycles.  Often too scantily clad that one might miss the motorcycle completely.  The anime technique is standard without anything sensational, and the music just recycled (no pun intended) the series’ tunes.  Just call it two worthy additions to the storyline that was touching the borders of the mediocre.

One special trip and the story of the butler!