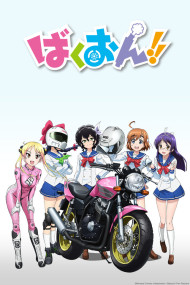 Once upon a time, there was a girl, let's call her Eyebrows, that grew tired of walking her bike up steep hills every morning to get to school. A tough girl by name of Frizzy rode past her on a Honda, and the fair Eyebrows was enchanted. Eyebrows followed Frizzy and met Boobs McSuzuki, Fem-Stig, and RichGirl. So began the weird fanservice that is Bakuon.  Story: I don't know whether the story was pimping out the bikes or the girls more. Now, I understand the boobs and motocycles have had a long history, but do we really need literal body washes of the bikes? The super chest of Boobs McSuzuki? The groping of Fem-Stig? Probably because the storyline is super boring. Unless you are really into the Japanese manufacturers of motorcylces, this show will be a snooze fest. Most of the conflict is the girls arguing over the brand names of their bikes. Now, I can't say whether the original manga was also this much of a comercial, but the anime is certainly dropping names left and right. And they straight up ripped off Top Gear with Raimu-senpai. She is, in almost every way, the Stig.  Animation: The bikes looked good. The girls were fairly generic in design, aside from the one distinguishing feature they all had. And while the still shots were well animated, it seemed the inbetween animators did not like trying to figure out hair movement at speeds approaching highway limits. And TMS, good job on hinting to your glory days with that Akira poster, because this... this was not your best work.  Sound: Hold on just a sec, I need to grab some duct tape. *tapes Eyebrow's mouth shut* There, now the anime is 200% better in sound. The OP is decent, the ED is mediocre at best. And personally, my favorite voice actor was Raimu... because she didn't talk. The others were somewhere between grating ang downright ear splitting.  Characters: Have you noticed that only Raimu's getting named here? Everyone else is still going by the nicknames I gave them? Yeah, that's because aside from one or two features, they could be completely replaced with other people, and I wouldn't notice. Hell, you could change them to animals... same show. The girls were completely bland, and only cared about their bike brands, no interest outside the bikes.  So, should you watch this? God no. Stay away from it. It's so bland, I could serve it instead of white rice.

*Now this is going to be a short review since I don’t have a lot to say about Bakuon!! The reason for this is that Bakuon!! became exactly what I expected. It was a fun, kinda silly comedy anime that didn’t have a great storyline or any storyline for that matter. As an absolute novice in motorcycles I also can’t judge if this anime was really exact about the motorcycles but I did feel that I didn’t learn a lot about motorcycles. In for instance Yowamushi Pedal a lot of cycling terms and phenomenon are explained in detail. And that’s something that I missed in Bakuon!!.  Btw, this was kind of ironic but did this anime have a hatred towards cyclists? This is really ironic since the studio TMS is also the studio behind Yowamushi Pedal. Now there were certain things that I did like about Bakuon!! The comedy was silly but not too silly for my taste and to me the best character of the anime was Raimu despite of or thanks to her being a rip-off from the Stig. For a video review, check out my Youtube channel. Link on my profile page. *Now there’s one negative thing that I just have to mention because it was a major editing error by the studio. It may come as no surprise that it was in a scene involving a cyclist but it was such a childish mistake that everyone, not only cycling enthusiasts like me, would notice. It was in the second to last episode that at one point a cyclist comes riding towards us and he has to stop at a red light. We clearly see that he unclips his right foot to stop. Than we get the next shot from behind and you can probably already guess where I’m going with this. In that next shot not his right foot but his left foot was unclipped and standing on the ground. Such a dumb and childish mistake to make by a decent animatonstudio like TMS Entertainment. Conclusion So as a conclusion, as I said at the beginning of the review: Bakuon!! became exactly what I expected it to become. It was a fun series to watch in between the more intens or story driven anime’s of the Spring 2016 season. And that’s why I’m going to rate Bakuon!! at 3 stars. I had a good time watching it but it’s not an anime that I will probably rewatch very soon.

Recently, I read an article on that quaint anime/sub-genre, 'Cute girls do hobbies.'  Bakuon!! was recommended to me by  the one who steered me to Sabagebu! Survival Game Club.  I won’t call this ‘strike two’ for the fellow, although Bakuon is a strange info-series on motorcycles, teaching us how to pop wheelies and speed up full throttle as you pass gorgeous scenery.  And the last thing you'll see on each episode is a reminder to follow all the rules of the road and drive safely.  A crazy dance of responsibility and irresponsibility. But the girls who make up the Motorcycle Club are downright kawaii flirting with moé. Hane Sakura (sweet and silly) is the main character, and we see things from her point of view, which is hard as she seems most dense in all subjects.  Hane wanted to learn how to drive a motorcycle when she was struggling up the steep hill leading to her school.  Still, Hane is a relative dolt in the area of motor cycling.  The reason she bought her Honda?  It's pink. Onsa Amano (sweet and sour) seems to be Hane’s BFF.  It was Onsa breezing up the hill on her Yamaha which led Hane to try for her motorcycle license.  Onsa strives to be the inspirational know-it-all in all things motorcycle, but this tends to make her irritating.  Her thick head of curly hair has earned her the name 'mophead' from her friendly nemesis ... Rin Suzunoki (sweet and stacked compicateding) doesn’t like Onsa because of her choice of motorcycle.  Her love for her Suzuki Katana makes her Osna's bitter foe.  Their adversarial relationship reminds me of the Ford vs. Chevy rivalry in my high school days (find on road dead ... fix or repair daily ... flip over, read directions ... guess which side I was on?).  But Rin is so devoted to Suzuki that she dons the tight-fitting Suzuki cyclist's uniform and bears the Suzuki 'S' which was accidentally branded on her ... Well, let's put this behind us and move on.  As all the other girls deem the Suzuki brand as the inferior cycle, Rin is the long-suffering non-member of the Motorcycle Club. Raimu Kawasaki (sweet and secretive) is the senpai of the club who wears her cyclist helmet all the time and communicates by writing.  There is some mystery about how old she is.  She has never left high school and appears to have first attended when the present teacher was a third year.  This would place Raimu in her early thirties.  Raimu is hands down the best motorcyclist of the group, reaching her destinations at superior speed and near supernatural abilities. Hijiri Minowa (sweet and sophisticated) is a girl from an ultra-rich family who wishes to be part of the Motorcycle Club even though she cannot ride a motorcycle.  She must make do by riding in the sidecar of the family Ducati driven by the family butler Hayakawa.  It is Hayakawa's goal to train Hijiri to find the independence of driving herself. Chisame Nakano (sweet and spunky) is a first-year who comes into the series around episode nine.  She knows the racing side of moto-cross as she grew up, winning all the time.  But she is short, and the girls' goal of setting her up on the brand of their choice is answered by Chisame's knowledge of seat height.  Unable to drive a normal motorcycle, Chisame is just as quick on her scooter, the legendary Super Cub. Bakuon is a paean of praise for the four major Japanese motorcycle manufacturers (Honda, Yamaha, Suzuki, and Kawasaki).  The motorcycle Hijira rides in is a Ducati, an Italian brand which needs constant replacing.  It seems that foreign brands of motorcycles get short shrift.  Wonder about Harley Davidson?  I live about an hour from the plant, fifty minutes from their museum.  Often mistaken for a superior looking motorcycle, it is taken to be the ride of an 'angelic' character who pops in and out of the story.  Seems no ‘Hogs’ were harmed in this series. The episodes began with solid plot lines dealing with the comradery of the girls as they gain their licenses, do tours, take in the hot baths and spas, wash their bikes a la bikini method, lure new member Chisame into the club.  But the last episodes were clumsier, almost a confusion of plot and subplot.  The last episode gives us a major 'what if'' there were no such things as motorcycles.  For one moment, Hane was the most knowledgeable of the girls in re motorcycles.  We have no clear knowledge of Raimu, even if she will one day 'graduate' and leave the Motorcycle Club to the members. Good characters support the five/six girls, from Rin's accident-prone father, Onsa's basically dishonest father, Chisame's superstar father, and even Baito, Hane's friendly training motorcycle who returns to Hane as the new gas tank.  They contribute the zaniness which the girls themselves could not offer.  Cute can offer only so much.  In the end, Hane is nearly back to riding a bicycle to school. Bakuon!! is a good primer for motorcycle details, odd and ends, and basic road info.  But the plots sped us nowhere, the real weakness of the series. 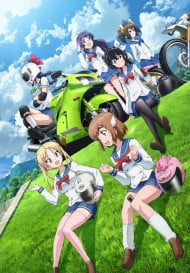 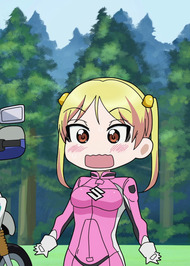 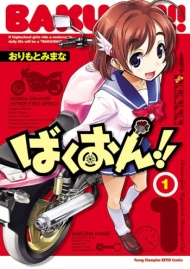 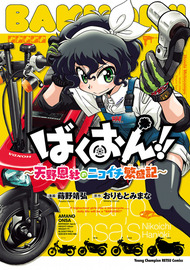 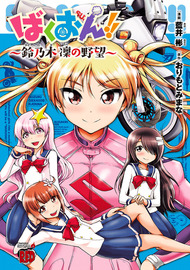