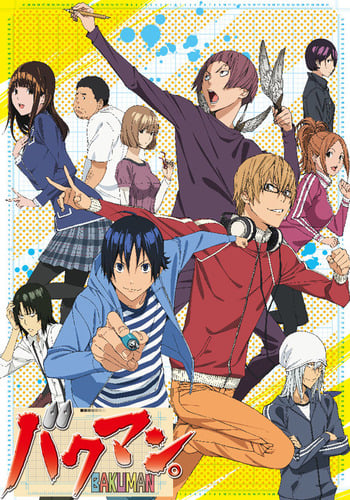 These two shows stand out to me as being really excellent examples of "feel-good" anime with substance. As in, when you're done watching an episode, you can't help but feel excited about the story. They're also both about young people who have big dreams working to succeed against long odds, with a side of light romance.

Despite being about two different things, these shows have a lot in common. The characters are extremely passionate and give their all into what they love; playing karuta in Chihayafuru and creating manga in Bakuman. As the story progresses, you'll get sucked in and before you know it, you'll be cheering the characters on as hard as you can as they overcome numerous hardships. Romance, comedy, drama, tears, smiles, and hardwork are all included in both of these series, so don't miss out.

Despite being about two different things, these shows have a lot in common. The characters are extremely passionate and give their all into their one true goal in life; becoming an astronaut in Uchuu Kyoudai and becoming a popular manga artist in Bakuman. As the story progresses, you'll begin to cheer the characters on and watch in eagerness as they try to overcome trial after trial. You may even shed tears along with them. If you liked these things in Bakuman, you'll definitely like them in Uchuu Kyoudai.

The genres are different and the romance is different and so is the focus of the show however if you enjoyed seeing the parts of the process of making a novel or manga, editors, publishing, etc, in one of these animes then you might want to check out the other. In Bakuman the main characters are trying to become Mangakas and in Junjou one of the main characters is a famous writer and the other wants to work in a publishing house specifically the manga department.

Minato goes to an anime event that has a voice acting recital with a friend. He is fascinated by the talent of the voice actors, and he meets Chikako, who studies at the Suidoubashi Animation Academy.