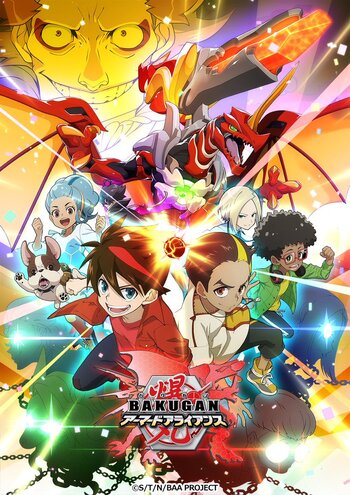 Drago is unable to control the powers he has received from Code Eve, so Dan and Drago contemplate retirement. Meanwhile a new and insidious enemy infiltrates Bakugan Interspace shaking the Battle Brawlers and their fans. The Battle Brawlers must find a way to control Code Eve's powers, with the help of some new allies, or else this new threat could threaten all Bakugan everywhere.

Bakugan Interspace has gone active all across the Earth, and kids are having fun testing their skills against Dan, Shun, and Marucho. However the Brawlers soon learn some Bakugan were sent into an alternate dimension when Vestroia became six different groups. These Bakugan are now at war with each other as the Gunadlians and the Neathians fighting for control of their dimension and looking to recruit the strongest Earthlings to their cause. When the battle spreads to Bakugan Interspace, the Brawlers must decide which side they will join and how they can keep other kids from falling into the politics of war.

Drago returns to Earth with a new ally named Mira. The five original Bakugan that helped restore order to New Vestroia have been captured, Drago is now being targeted, and a group of humans known as the Vexos are taking over New Vestroia. With the help of Dan and the Battle Brawlers though, Drago believes he will have enough power to not only free New Vestroia but his friends as well.