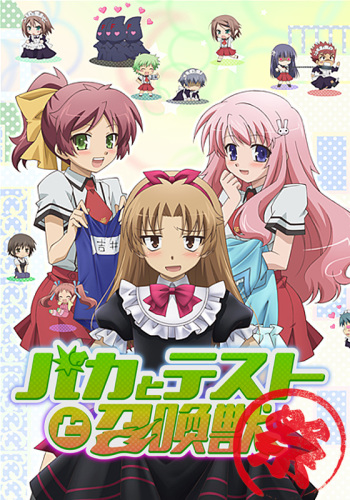 The first season of Baka and Test - Summon The Beasts was my 43rd Review. I really slacked off this time. I somehow overlooked that there was an OVA attached to Baka and Test and since the OVA is not that long. I took the time to go over the OVA of Baka and Test. Which I am about to do now.

Continuing where the first season left off, everyone in Class F is bemoaning the horrible equipment they have. However, There is a school festival going on, and if they make enough money... they'll be able to buy better school supplies, and as always Akihisa is ready to do anything that might help out Himeji. This is important though, because Himeji's father is worried about her placement in Class F and is thinking about transferring her to another school. To be technical, this is a Silver Link production and the animation is ok for the most part.  It’s nice looking for an OVA. That’s all I can say about the animation really.

The music is done by Nijine and the music is not something to write home about. It’s not a memorable soundtrack. I don’t know what else to say about the soundtrack. 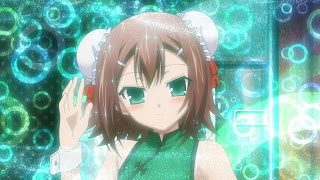 When it comes to voice acting, the Japanese cast is decent enough for the show. I did comment that the English dub was not too special back when I reviewed the first season of Baka and Test. I could also say that the dub could have been better. Just go with what you prefer. 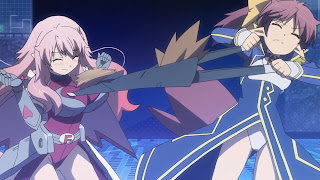 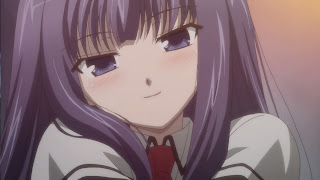 When it comes to story, well...the OVA’s only two episodes long and lasts an hour. There’s nothing much to say about the plot of this OVA. it’s ok I guess. Since this OVA is short, so will this review.

Baka and Test - Summon The Beasts OVA is available by Funimation.

With all that said, the OVA of Baka and Test is a short addition to the first season. The animation is ok, but the music and story aren’t something worth writing home about. It’s just a decent addition to Baka and Test.

Feel free to leave a comment, and have a good day.

Well, I’m not sure what to say about this except that it’s similar to the TV version of the show. The comedy is the same as well as all the mess ups and luck that the group has at times weather good or bad. It’s only two episodes for crying out loud and trying to find a way to talk about it without spoilers is not that easy. We still have the same jokes that are an on going gag like one of the male students dressing female and we even get a chance to see Yoshii’s sister sort of have a cameo with her cooking. It’s pretty short so not much there except a good watch.

The animation is stunning, bright and beautiful. The colors are almost brightened as a pastel most of the time, exactly the same as the first. It matches perfectly and could have easily been put in with the rest of the series instead of being an OVA but of course good shows like this seem to always have a OVA involved.

Same voice actors so again, done really well and matches all the good things the first one had in store. We did see some ‘new’ people in the show but they didn’t stand out at all. They just fit nicely in like a jigsaw puzzle without any real complaints. I guess the one thing I didn’t like was all the super loud yelling at times but that’s my own preference. It fit the characters and situation.

Baka to Test; it may be stupid but it's at the point of being stupidly fun without moving into annoying and this OVA is no different. As the synopsis states, it's an adaptation of the Festival arc in the manga. It's recommended that one watches the first season before watching the OVA as to not miss out on some of the references to events seen in the first season. You don't have to, as this is simple minded fun and can be enjoyed without knowing what happened before (And that the first season was pretty episodic at times). But it's recommended nonetheless as it would be a shame to miss out on the fun of season one.

Not much can be said about the story, as all you need is in the synopsis. It aims to be an adaptation of the manga festival arc and it does just that. It has the beginning of the festival, the festival itself, the twist, the solution and a conclusion to it all without leaving any loose ends. It works, simple as that. And it's not only simple, but it's fun. As usual, it provides laughs and without mixing and matching character traits to make it non-canon. You may not laugh at everything but I sure did. It's stupid but it aims to do what it does best and with an actual plot.

The animation looks the same, yet better. I guess they kept the look and polished it up without losing the charm of it all, or the good looking crossdressing. The show does that stuff so well, be it with chinese dresses or maid outfits; it's amazing.

Ahem. Sound is as good as before and the music is oddly enjoyable. Not to everybody's taste but it suits it. Kinda nonsensical but fun.

It doesn't aim to add depth to the characters but it works to make them fun to watch.

Quite simply, if you enjoyed the first season of Baka to Test, you'll enjoy this and it'll help tide you over for the second season wait. If you enjoy comedy, check out the first season and return to this. Once again, this is an adaptation for the festival. Nothing more than that and that's how I primarily graded it; an extension to the main series and not as a stand-alone work.