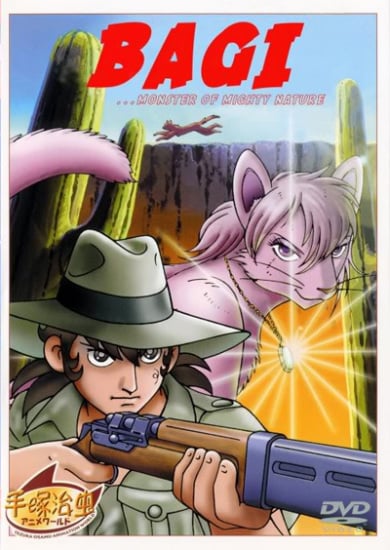 StoryStories about the manipulation of science and the bioethical challenges that arise from experimental taboos are not uncommonly explored in any type of media. If classics from Mary Shelley's Frankenstein to Issac Asimov's "I Robot" are any indication, beings created under the scientific spectrum allow us to explore what it means to be human, both in a technical context as well as in the general nuances one possesses. Bagi, the Monster of Mighty Nature, is a 1984 film that nicely explores this contrast, through the eyes of its rebellious protagonist Ryosuke. Part coming of age, part sci-fi with a mix of comedic elements, drama, and action/adventure, this film had my attention from beginning to end with an intriguing storyline with twists and turns rarely seen in anime films to date, and aptly defines itself as a noted classic from creator Osamu Tezuka, long considered the father of anime (Astroboy, Black Jack). The movie tells the story of how Ryosuke came to meet Bagi, a half feline, half human, half demon with extraordinary abilities, and chronicles their journey together in a quest to find out who and what Bagi truly is. The storyline tends to jump around a bit to fill in the appropriate backstory and chroncle how Bagi and Ryo came to know each other initially, but it's never too much that the viewer cannot follow the train of events that occur in sequence. The only issue I would say is that the brief context in which these events are shown don't always give enough perspective in the case of some of the side characters, and might feel a bit rushed in some places more than others. Yet, I couldn't help, despite knowing a little where it oriented, being drawn into the story and willingly following the mysterious Bagi alongside Ryosuke, the latter of whom has his hilarious moments along some serious ones. Indubitably, the story has its share of nicely rounded twists that fill the story and allow it to tug at your heartstrings in points. Then...comes the rather tacked on ending that I felt spoiled the experience a little by how quickly it was resolved. Granted, I think Tezuka did want to orient towards a mix of tragic events and simply sweet scenes, and there are many places in this movie where it's shown beautifully, but there are times when sudden turns come a little awkwardly and tend to throw off the pacing a bit. Despite its flaws, I think Bagi was one of the best anime movies I had seen in a while with respect to its story. Granted, it's by no means perfection in its execution, but for being able to engage the senses and take you into the perspective of the characters, it's something that was well noted in my eyes.AnimationBagi, the Monster of Mighty Nature tends to show its age with respect to animation. I wouldn't judge it so much on the style of the animation, considering it dates back to the mid 1980s and the character designs are quite like many Tezuka Production series (Black Jack is a good example of this), I'd have more issues with the consistency of the animation. There are times when in potent scenes, the characters seem a bit disportionate in body dimensions, and blood appears in one scene only to disappear in the next. Granted, in several series, this stream of inconsistency is nothing new, even in those that are more up-to-date, but there were more than a few instances I took note of it in this movie, and I had to weigh the balance of it overall. Action scenes, cel backdrops and character design were all decent for its respective time, but could have been made a little smoother in transition.SoundThe BGM for this movie didn't quite stand out on its own in retrospect, but was well suited for the respective scenes it was used. There aren't any vocal performances or J-pop tunes to be heard here, just instrumental, and seemingly nostalgic, tunes to be heard in the context of the scenes, whether its the dramatic fanfare played in the midst of a chase/attack scene, or the sweet, contemplative context of a more intimate one between the characters. Considering the time the movie was created, I thought the sound was quite well done for the respective scenes and imaging coupled with it...yet for contemporary audiences who look for something to stick with them a little more, it may not be quite as appealing in retrospect.CharactersExcellent use of characterization, simply put, at least from the perspective of the leading characters. Ryosuke might be one of my favorite protagonists from an anime movie to date for how well the movie shows his coming of age. Granted, the movie jumps from showing him in his current age (20) to age 15 and younger contextually, as the story delves a bit into his past. Bagi's own characterization follows his very closely, and it's no surprise considering they are shown to have been brought up together. I also liked the characterizations of both Ryosuke's parents, though we see Ryosuke's mother a little more in the latter part of the movie. The great thing about how this works within the movie is that instead of the movie being too plot driven or too character driven, it plays a semibalance of both, allowing us to figure what the characters are thinking, feeling, even down to base assumptions, which make the twists all the more intriguing.OverallA definite recommendation for those who want to delve a little more into anime classic movies. Granted, there may be moments that seem a bit marred in sequence, but it's well worth noting the ride it takes you through.