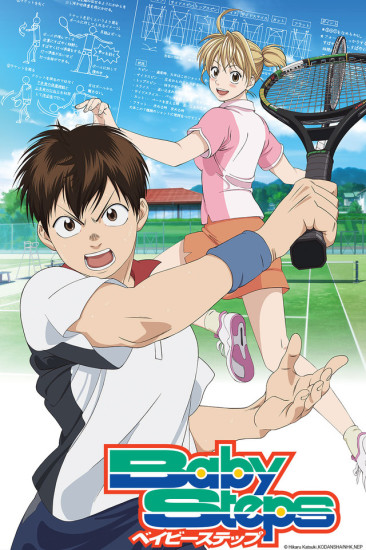 First and foremost, I was turned onto this series due to the YouTuber Mother's Basement where he mentions this as one of his top romance picks. Well, I'm here to tell him he's completely wrong. The romance in this series is basically non-existent. So, if you're thinking of this series for the same reason - don't. Just don't.

So, now that we've pretty firmly established this is not a romance series, how is it as a sports anime? It is completely and utterly... adequate. My entire impression of this series is that "it's okay". But let's break it down:

At heart, this is a series very similar to something like Days! or Welcome to the Ballroom where the viewer is meant to have minimal knowledge of the sport and we learn the sport as the protagonist does. They learn, they grow, and we are introduced to progressively more advanced information as the series progresses.

The problem here is that, as mentioned, this story is just adequate. It's a very obvious plot, with no real twists and the climaxes are all very obvious. My biggest issue here is the pacing. It's very slow. The matches are slow, the time between matches is slow, and the romance is basically at a snail's pace.

This is probably where the series lacks the most. The characters are all drawn fairly poorly and there are times where I've actually paused just to kind of marvel at how badly drawn the faces are. The action sequences are better but unlike a series like Haikyuu, you don't get a good feel for the movement and instead we are presented with a lot of still images of "motion in progress".

Again, it's very adequate. Voices are decent and there's no screaming or yelling. The whole series has kind of a softly excited feeling to it. Characters are generally subdued and it's actually kind of a nice reprieve considering some of the louder series we've seen lately (lookin' at you Black Clover!). The only sound they really miss on is the sound of the ball hitting the racket. They give it a weird kind of popping sound where it should sound more like a metallic spring.

The characters that the directors cared about are all fleshed out fairly well. Though why they chose not to care about the love interest is beyond me. What holds back the series is the few very odd characters. Like the rival, in the first few episodes, is just a brooding and angry teenager for... no reason. They never explain his brooding, and we're just kind of supposed to go "oh, it's just part of his character, sure". And what makes this even more painful is they even introduce a love rival. Like, why introduce a love rival if you don't even flesh out the main love interest?

But, the series focuses on the protagonist and they spend 90% of the time on him. He's a bit obsessive but is well adjusted. They try very hard to make him a humble prodigy (sort of) and it works mostly. He's likeable, which is very good since he's basically all we've got.

I'd say this series is for people who like slow growth sports series with flat climaxes. I enjoyed my time watching and I don't regret it but I didn't walk away with anything other than a feeling of "meh".

This anime is decent yet somehow obnoxious simultaneously.

They realisticly could have condensed episodes and cut the entire series down at least 15 episodes. They drag the episodes on and on and on, forcing the viewer to binge watch to be able to understand what happens, which while might be a somewhat genius ploy at first to keep people interested, gets boring and downright irritating as it happens from the beginning of the first season all the way down to the very last episode of the 2nd.

This tactic gets so irritating that for the first time in a long time I found myself skipping all the way to the end of episodes just to find out who won each match. On that note, the dragged on episodes always hit a high point and end with Maruo losing like 80% of the time. Sorry if that spoiles things for you, but I for one would have loved to know that the main character, while quite adept and talented, loses constantly through both seasons.

I should've viewed the tags, on this website or myanimelist before watching, but I didn't, and I know better. So after seeing the 'romance' tag on gogoanime, which I know I should never trust, I was greatly disappointed, as this anime has practically no romance at all.

Overall this anime was entertaining, but the style that they chose to use throughout the entire anime backfired from the creators intentions. Trying to use this same style constantly to create tension doesn't work. It's great to use that tactic to change things up, or simply for the beginning of an anime to get people interested, but that method has never been sutiable as a constant technique for keeping people engaged. By the second half of the 2nd season it was downright obnoxious and became difficult for me to even want to finish the anime. Quite frankly, I wish I could take back the time I used to watch this show.

This show is criminally underrated! To put it simple for the overall about Baby Steps, its a Masterpiece in Sports genre in Anime and a MASTERPIECE IN TENNIS!

It’s also based on a manga that won the Kodansha award! It’s seriously amazing and inspiring!

This anime was one of the first ones I watched and I really love it, but looking back I cann see there are some things that need improving. The characters are all loveable, but they are all quite basic. The only thing saved it from getting a 7/10 was that the character devlopement of the main character Eiichiro Maruo, was incredible. He started out as a regular school nerd and then exeptional bacame an great tennis player by using hard work to overcome all the odds. I really love this anime, but I am really sad that they cancelled it. There is only a season 1 and 2, so they left out a season three and just dropped the whole thing. So if you plan on watching this make sure you are prepared to read the manga if you want to continue with their story.