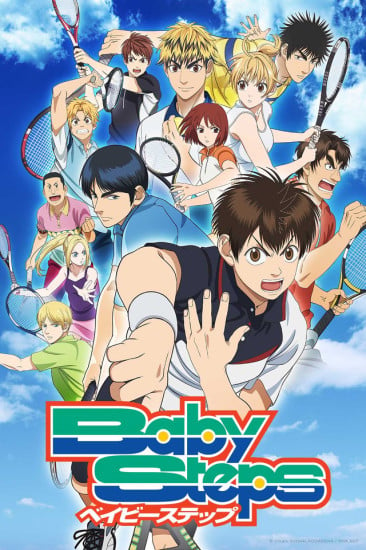 i have watched both of these anime and enjoy them both very much, they bring you out of reality with there cool moves and mentality yet they stay just in the boundraies of reality watch it for yourself to understand why that is :)

Obviously they are both high school tennis anime, but Baby Steps takes the bottom up approach as it's main character starts tennis rather late in life and finds he has a propencity for the game. Prince of Tennis follows the evolution of a tennis prodigy as he emerges on to the Japanese high school tennis scenes and constantly looks to beat his next challenge. Both have your typical over the top skills and completely unreasonable/impossible training methods popular in anime sports shows, but Baby Steps is far more realistic about it. If you were to sum these up into characters Prince of Tennis is Neji Hyūga, the boy genius everyone expects great things from. Baby Steps is Rock Lee who is the genius of hard work looking to will his way to the top.

(Same as the original season of Baby Steps)Well, considering they're both very much about tennis, it's pretty obvious. They take a slightly different route, however, with the protagonist prodigies coming from almost opposite beginnings. It's a fresh take for both ways and would surely sate any tennis or sports anime enthusiast.