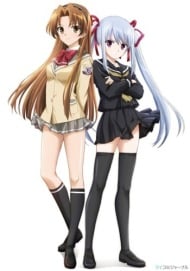 Baby Princess 3D Paradise is a half hour OVA about a guy who has 19 sisters, on a holiday to both a river (ie Beach) and later, hotsprings. Yes 19 sisters. I'll explain the situation in the characters section. Needless to say, this is obviously going to be an ecchi anime with harem aspects, a common combination of the worst genres. Yes, I hate ecchi/harem, therefore this review will be affected by it. They try to add comedy, but I didn't laugh so I'd count out the comedy genre. I'll be frank, there is no reason to watch this anime, at all. But somebody needed to review it, so I took the bullet. Animation/Sound Animation is of course top notch, colourful stuff. No perverts want to stare at terribly animated chicks now do they? Of course, it didn't do anything extraordinary and I removed a point for the ecchi. Sound is nothing amazing or terrible. Not worth talking about at all. This anime is only in Japanese of course, who in their right minds would allow this to be dubbed English? For a single measely episode too. There is some English dialogue however, read on to find out why. Characters Now the characters, I may rant on this a bit. There are 20 siblings in all of which one of the oldest (if not the oldest, since it's not specified how old he is) is the lone son. According to the synopsis, he only recently discovers his biological mother and that he has 19 sisters. There is nothing special about him and I'm happy to say he isn't a pervert, in fact he's quite modest and he doesn't want to go into the single hot spring which the entire family (bar mother) is sharing for the trip. So +1 for that character alone. Now down to the rest of the characters and the rant. The probability that 19 of 20 children would be female is a little over 1 in a million. Then again you don't really see families with that many kids. The sisters range from an 18 year old high-school student to a baby in age and encompass all of the anime character tropes. I won't list them. Of course some of them think of their long lost brother in a romantic way. As for the mother who appears a bit at the start, she looks as young as her daughters. That would put her maximum age at 36 (oldest daughter being 18), meaning she had a new child roughly every 10/11 months. Considering thats a whole lot of fucking, I'm surprised that once again, there is no father in sight. Cos whoever the father of her children is, must really love his wife to be banging the same hot woman for 18 years, since she was 18 herself. Did they not think of contraception? Cos no way is that woman any older than 36, but that's probably bullshit animation style at work, making people look younger than they are. Did dad die from having too much sex after the last child? Or is their mother actually a whore or something, that goes back to work after giving birth? It would make sense, considering how different each girl looks, usually siblings resemble each other. That would mean that all the kids are bastard siblings. No matter who fathered her 20 children, one thing for sure, mother is this animes pervert character. She even gives her daughters the suggestion to kiss her son. Maybe I'm forgetting that this is an anime, a non-fiction medium where anything can happen. With that rant out of the way, I'm to discussing the other topic: harem. Would this count as harem since all 19 of the girls are the guys biological siblings? Heck, the infatuations are one way usually the younger siblings, therefore counting as pedophilia as well as incest. I'm glad the dude isn't a pervert or this anime would literally be an incestuous orgy. There is a lot of incestuous kissing however. Story There is none. The whole single episode is a cross-between a token beach episode and a token hot springs episode. The only things that come close are 2 minutes where 2 of the sisters get carried away on a dinghy in the river and later when the single brother is trying to hide himself in the hotspring when all his other (there was already a sister or 2 in there) sisters jump in. I must admit, that bit was the closest to making me laugh due to the literal metaphor of the guy being a submarine, complete with imaginary (US-English speaking) crew. Conclusion Now, would I recommend this anime or not? Some may argue that its worth it since its only 1 episode of 30 minutes. If there was some actual story or something good, I would agree. However, one word can sum this anime up: POINTLESS. This wouldn't even be worth it for perverts, since they might as well spend 30 minutes watching porn or something. Even if I didn't hate ecchi-harem, I'd still feel the same way about this 30 minutes. Now I'm wondering how on earth this anime even got onto my watch list. Did some brainless bastard recommend this to me? (only way ecchi-harem gets on, as a result I've relatively few anime of those genres) The worst idea for an anime ever? Maybe... Moral of the story: Use contraception or just don't have kids at all. And don't have too much sex that you outright disappear and nobody cares Family-friendliness Rating: 4/5 While there is no direct nudity, there are a lot of breasts, some bare, in fact I might remember seeing a partial nipple (lower is better) Overall Rating: 1/10

Short but it's a break from all the other animes.

What a candy ass title. Must be a good show. Story: This OVA reminds me of two shows, one of them shit and the other borderline criminal. Their names are irrelevant (Brothers Conflict and Mujaki no Rakuen respectively). The first because it's the same premise but gender reversed so now it's the dude living the life of having all these hot babes and younger girls as sisters with a total milf who should appear way more; and the second because all the younger sisters absolutely love dear old brother and some of the stuff gets kind of seedy and makes you look over your shoulder or keep one eye on the door because you know that there is no way that you can weasel yourself out of this one. Not that I would know. Except I do know, since I namedropped Mujaki no Rakuen but that's another story. There really isn't much else to say as that's as deep as the plot gets. With half an hour and 19 sisters a year apart and probably having the same birthday or some weird ass coincidence because Dad and Mom did get it on (WOO-WEE) like rabbits and sired that many children in this economy, affording some kind of super mansion when all the other houses around them are sensible 2-3 bedroom accomodations with a somewhat modest yard instead of a fucking huge ass yard front and back and all this rich fancy shit AND the fact that they can afford to take regular vacations despite needing a shitton of money even if kids 6 and under get in for free- Sorry, the plot is really barebones and I need to point how illogical it was. The characters are just as deep so imagine that I went through the characters and that at least all of them love their big bro and half of them in an incestual way. This also needed way more incest. Animation: The jiggle physics were pretty entertaining, I'll give it that. And the second oldest sister (I kept track on who was the second oldest) is pretty cute with her short hair. Muchos excellente. And had some nice booty shots, which may sound wrong, but I assure you that I mean the older sister. And second oldest. There is no way to go about this without sounding like a perv. Sound: There is one voice I remember and it was as if the devil was scratching nails on a chalkboard while caterwauling. Charac-: Oh yeah, we did this already. Overall: There are much worse shows you can creep out on, but it doesn't mean you have to creep out. If you made it this far, let the final words be to "Skip out on this" and "Rule of three for Mujaki no Rakuen". Review for DAMC - September 2016 Edition 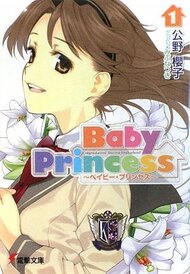 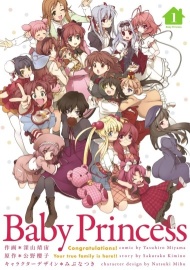