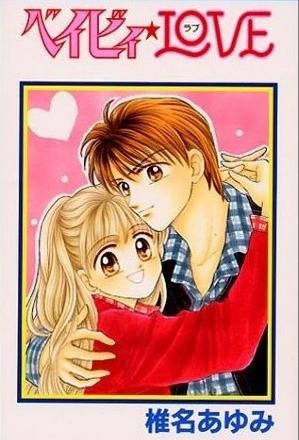 Story
Baby Love unfortunately suffers from the young adult codependant love interest syndrome. While normal and stable adolescents/teenagers might have a crush that lasts awhile, most (at least I hope) don't become completely obsessive and secretive about convincing someone to look their way. In addition, I rarely hear 16 year olds talking about how they would die for someone they barely know, and only met briefly when they were 12. But for anime, especially romance ones? This is totally fair game, as it is in the case of Baby Love. For the obsessive nature it reminded me quite a bit of Fashion Boy is Cool. What could have been a normal puppy love crush turned into something (as far as I'm concerned) freakish and WAY too co-dependant to be amusing. Because hey, I'm female, and it really creeps me out to think that certain anime series/OVAs give women an extremely stalkerish/co dependant stereotype! (Granted, this is true in some cases, but still ;)).

As far as the actual plot, though, it is totally generic. I already mentioned Fashion Boy is Cool, and it should be brought up again. Although it also fit into this stalkerish female romance vibe, it at least had a very unique premise and story. Baby Love, on the other hand, just doesn't. Girl from past obsesses over boy in the present, boy doesn't remember her. HELLO, REPETITION!

The flow itself was decent, nothing was confusing or misleading.

There were comedic aspects sprinkled throughout the OVA, though for the most part were again right up the "obsessive insecure girl" alley. Namely, Seara's obsession with getting larger breasts, so Shuhei would pay attention to her.

All in all, a very overdone weak plot, but still had a decent flow to it, hence the average score of 5.
Animation
The overall animation style of Baby Love was fairly poor, and worse yet, it was made in 1997! It definitely looks like it was made in the mid 80s, with a poor budget. Granted, the producers probably wanted it to look like the manga, and that works, but I don't feel like there is much excuse for how old the animation looks from only a few years ago.

The characters themselves are very old (animation style) looking, with huge saucer eyes and limited other facial features. Combine this with trademark poofy/flowy hair and limited shading, and you have the characters of Baby Love.

Colors were very average looking, coming from a wide palette of uninteresting shades and tones. Colors from across the board were used, mostly green, red, and blue, with lots of orange. Nothing was exceptionally vibrant or interesting as far as shading.

The one time the visuals did impress was near the end, in a forest scene with autumn colors on the leaves (which were floating on the wind), with the camera angle off center, giving the scene an unusual and nice perspective. Other than that, backgrounds and scenery were unimpressive and bland.

No CG or anything exceptional was used.
Sound
The music was a very unusual mix of early 90s sounding buttrock. Although this kind of thing was played perhaps to appeal to youths, it still seemed out of place for the type of show this was. Any other music was background and boring.

Voice actors did a decent job, fitting their child-like or neutral roles they played.
Characters
The characters fit their obsessive roles very nicely, but they still seemed 2-dimensional and lacking of substance. Seara was a textbook insecure child, obsessing (I keep saying this, but it fits well) over someone she barely knows, saying she'd die for him (WHY?!), and tries so badly to get him to like her. Shuhei is a typical guy, far more interested in huge breasted hotties than a 16 year old kid. The friends of Shuhei were not developed at all, and seemed fairly background and pointless. I don't know, the roles the characters played, and the short time they were on the screen, just didn't end up interesting me in the long run. Interaction between Shuhei and Seara seemed shallow, just like their attempt at a relationship.
Overall
Baby Love was a generic look at an obsessive girl who needs to get a life. The animation was lackluster for its time, the music was out of place, and the plot was nothing to scream about. It did have decent character roles going for it (though they were very strange already, due to the obsession), so I guess that's a decent plus. All in all, a very generic watch. But hey, with only one episode of 30 minutes, it wouldn't take too long to watch if you really like romance things and want to see them all (or if you just want to see a rarity). I wouldn't watch it again, but you may find value in it, who knows.

I really enjoyed watching Baby Love! Occasionally, it was heartwarming. More often, it was simply amusing. It's fun to watch people being stupid or have trouble communicating their feelings. I also really liked the characters' wardrobes. I guess this was made in 1997, which is a lot later than I would have guessed based on the clothing (then again, I was seven years old when this came out, so I was not exactly paying attention to what teenagers dressed like, especially in Japan). Anyway, I really like clothes like this, for some reason.
There were some really funny moments for me, visually- funny enough that I took several screen shots to show my friends. Another thing that made Baby Love really good to me was the part where Shuhei's friend screams. It sounded really funny.
I also liked the song which played during the ending credits. Its' sound was extremely dated and the way they froze eerything just for the song made me laugh. As soon as it finishes, everything unfreezes again!
Well, I would certainly recommend this show for people like myself, who are amused by (persumably) low budget anime and have a cynical attitude about life. If you're looking for a good love story with relatable characters, probably look somewhere else. Or just lighten up.

(I just gave Baby Love a 10/10 rating because it is required that I give it a score in order to submit my review, and because I did have a good time watching it. If I were to be serious, I would probably not give it a 10, but you should watch it for yourself and see what YOU would rate it!)

Well, this is pretty normal style of romance storyline. Two kids fall in love when they were little and promise to get married if one of them holds up to what the other tells them. Seara is a rather energetic girl who somewhat annoys me and somewhat intrigues me the length she will go to in order to get who she has loved for a long time. Sadly, she also feels like she is mostly just a stereo type along with every other childhood love interest. There really isn’t something that makes her stand out among the rest of the group and I think that maybe why there was only one episode made of this. It just feels bland. Many times it falls dangerously into the school life genre with Seara’s character hiding among the high schoolers to a point where I wonder why the parents haven’t been called to ask where their daughter is since she isn’t in her elementary school.

Shuhei on the other hand is a clueless idiot who needs to pull his head out of his butt and see what’s going on. She shows him multiple times that she likes him but he seems to wave it off.

The artwork is slightly flawed in that characters seem way too tall and their faces are too stretched out. Lots of times the chin seems really big or that the mouth has pushed up to far. I can understand a high school student looking like a collage student because my brother was rather tall for his age but the elementary girl looking like a high schooler would only happen if she had steroids pumped into her. Not to mention all those around her are actually rather short or look much more like what I would see as a elementary kid. It is rather rare to see this happen so I call BS on that. Still, I got to hand it to the animators that this was done around the time they still did hand cell animations so they did a rather nice job for the time. Lines are normally really crisp and eyes seem to sparkle rather well though they don’t seem as ‘glossy’ as other shows around that time. You can slightly tell this was still made on a medium budget or a high low budget. They did this little thing on one of the scenes where they tried to put a real picture into the mix with just a little airbrushing to it for a background but it doesn’t work at all for how simple the characters are drawn and the shadows that are shown. The characters seem like they are floating because they have no shadow at all on the ground when everything around them does.

The voices are alright and since this isn’t really dubbed, I really have no basic to talk about that. I can see each voice with each character and nothing really stands out much in my mind at being exceptional or lousy. I do think the friends of Shuhei should have a little more diologe but this is what I get for a OVA that’s only one episode. Rai on the other hand sounds like a pervert when he is talking about how cute Seara is. It’s slightly gay to me in a way because he gets really damn excited about an elementary school kid.

I watched this anime for a historical view on romance and how animation has changed over the years. This 1997 production is only 30 mins long. The storyline is a basic lead up to a romance. The actual animation quality I thought would have been better in 1997 compared to ones like pokemon etc. Though if you are looking for an innocent love story that is family friendly, this certainly hits that mark.