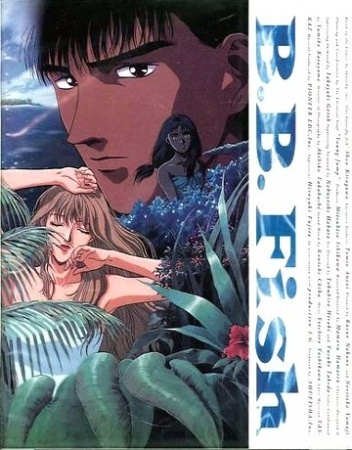 According to external sources, B.B. Fish is based on a fifteen-volume manga of the same name. Generally one-episode anime adaptations tend to be too confusing and don't provide enough of a background on the characters and situations to be enjoyable. B.B. Fish, while gorgeous to the eyes, is no exception.

With no explanation of who the characters are or why they're interested in what they're doing, you're dropped into the middle of a deep sea dive with Ushio and Sara. Random nakedness and pseudo superpowers ensue, followed by shots of gorgeous scenery.

But wait, there's more. A mysterious encounter with two girls (paired with mysterious drawn-out gazes) leads to more scenery shots, a yawn-inducing ‘climax' moment and more unneeded nakedness (this time in a huge bubble!). With no additional plot points and an unsatisfying conclusion, B.B. Fish's story falls flat on its face.

B.B. Fish was presumably created for fanboy purposes, though the only appeal it'll have to uneducated viewers is its admittedly gorgeous visuals. Practically every other shot is picturesque: beautiful sunsets, foreboding caves and underwater wonders grace the screen and help momentarily distract from the lackluster story. Character designs are trademark 90s, and color and detail levels are quite acceptable. The only anomaly is a sequence of scenes where Ushio is shown in a rasterized fashion, looking completely out of place at best.

As B.B. Fish is practically devoid of a soundtrack, its audio is nothing to scream about. The occasional track sounds like it should have come out of the 80s, and remaining sound effects such as a camera snap are satisfactory. Nothing bad, but nothing great either.

You learn a few of the characters' names. Yes folks, that's about the extent of the character development. There's a bit of a glimpse into one of the mysterious girl characters, but overall you learn nothing about the cast or feel any sort of empathy towards them. B.B. Fish's length certainly doesn't help the matter.

If for some reason you decide to watch B.B. Fish, do it for the animation. With minimal story and character development, B.B. Fish should be quickly added to any self-respecting fan's ‘won't watch' list.