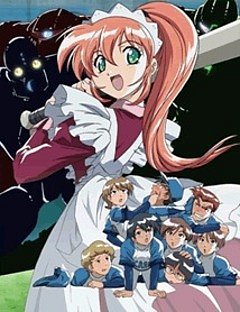 Story
Azusa Will Help is a fairly light hearted look at a supposedly futuristic society that has robots as a commonplace occurance. I say supposedly because although the year is 2099, you really can't tell at all, except for the addition of the robots. Anyways, these robots range from maids (no, really?!) to the more important sports playing robots, which vary in skill and power depending on, you guessed it, the cost.
The story focuses on Karu Duck High (wtf kind of a name is that?!), a semi-poor baseball team who wants to make it big. Unluckily for them, Eagle High has already purchased some of the baseball robots, and even more unlucky, Karu Duck just lost a player, making them one player short of entering the competition. They can't afford a baseball robot, so they buy a maid robot, and thus the story begins. There is no deep plot, no twists, and nothing that will make you need to think excessively. At only 45 minutes, this short OVA is centered around the team trying to make this unlikely robot turn into a master player, to help them win the game.
If I had to pick a genre to associate with it, it would probably be a light comedy, but really, there isn’t much that’s funny about it. There are several trademark jokes about the one female in the group being more like one of the guys (as opposed to Azusa), and a few borderline ecchi moments, but other than that, not much truly funny comedy to be found. I suppose it might be considered a baseball team slice of life of sorts. Anyways, while the story is engaging enough to not make you completely bored, it definitely doesn’t seem like anything unusual enough to get a very high rating. Sure, there aren’t too many anime series out there that are about baseball, but there sure are a lot about maid robots, or robots in general and their wacky antics they get into while humans are trying to teach them to do various things. This semi generic plot wasn’t highlighted by any funny comedy, endearing characters, or any emotion/situation thicker than a piece of paper, so it succeeded only at one thing: being a light hearted, shallow watch. This isn’t anything bad if you are in the mood for such a thing, but unless you really enjoy ditzy robot situations, this might not be a good use of 45 minutes of your time.
Animation
The animation style of the OVA was definitely crisp and appealing, but nothing special by any means. Colors used were mostly pastels, pink/orange hair, sea green or blue uniforms. The typical maid outfit was worn by Azusa, making you quite certain that her lineage was such. The animation tended to look older, based on the lightness of the shading, the non-brilliance of the colors, and the character designs. No CG or other special effects were used that I could remember. All in all, not a very impressive eye candy viewing, but not totally bad either.
Sound
The audio, like the OVA, was mostly light hearted and good spirited. Xylophone type sounds dominated a great deal of the music, which played lightly in the background during training or "comedic" situations. In a small way, the light music reminded me of something I'd hear in an RPG. Anyways, it gets higher than average points for having facets that were memorable (the xylophone beats, and generally fit well with the OVA), but still wasn't anything exceptionally good.
Voice actors did their parts well, even Azusa, whose annoying ditz voice easily convinced you of her character type.
Characters
Definitely not a high point of the OVA, as far as I'm concerned. Now, I'll admit that with a one episode OVA, there isn't much room for character development. It isn't like I expected the baseball team to go through any sort of growth or anything. The problem was, it tried to make you feel like growth DID happen, and it was very cheesy. Each character was very shallow and 2-dimensional, not offering anything in the way of personal background or endearing traits. The only two that stuck out even a little was the main male character, and the only female, just because she was the only female. Azusa was the annoying epitome of a stupid brainless maid, who never seemed to understand anything that was going on. I don't know, in general, too much supposed character development that felt flat, and too many pointless characters.
Overall
All in all, a very average light hearted baseball story. With nothing exciting about the plot and very lackluster characters, there isn't really anything to the OVA that would be memorable enough to watch again, let alone watch at all. The music was interesting enough, and the animation was decent, but in general, unless you really like baseball, robot maids, or need something brainless for 45 minutes, I probably wouldn't waste my time.

I seem to seperate myself from most of the anime-watching crowd in that I actually prefer shorter animes. In a TV series, the object is generally to pad the length as much as possible in order to cut costs but maintain viewership. In short OVAs, however, little time is available, and so every minute usually will contribute to the overall experience (as opposed to bloated series like Naruto or Hikaru no Go).

Another large perk of short animes is well illustrated by Azusa Will Help!: if the anime sucks, it doesnt waste too much of your time. The OVA is decidedly below average, with a weak storyline, generic characters, and only a handful of laughs, but its 40 minute runtime prevented me from hating it passionately.

Still, even if the show is a relatively small waste of time, its still a waste of time. The one or two good jokes in the entire OVA are largely cancelled out by the tedious and trite maid shit that dominates the running length. An attempt is made to dilute the cliche by combining the maid parts with elements from sports anime, but mixing together two hackneyed story devices seldom produces something original, and this is no exception.

The story doesnt really make a whole lot of sense from a logical perspective, either. In the anime, we are told that anatomically correct androids are no longer being made due to the apparent sexual consequences that inevitably result. This leads to the question of how the protagonist manages to purchase one of the older, fully fleshed out robots for so cheap. If sexdroids were in fact banned from production, there is no doubt in my mind that rabid, undersexed otaku would soon make the remaining ones nearly priceless. Also, the very idea that androids would be used to play baseball at all is preposterous. The whole point of athletic sports is to engage in fun, competitive excercise, and having a robot do that for you is just stupid. I think the concept is somewhat similar to getting a robot to jog for you every morning.

Voice acting is definitely on the stale side (although Ill grant that there isnt much ANYONE could do in these godawful roles), and music is weak and unmemorable.

An odd note is that Noto Mamiko is in this one, presumably before her career took off and she earned the luxury of not having to participate in this kind of degrading material. She does what she can with her role, but even Mamikos succulent, oh-so-good-to-hear-it voice isnt enough to save a cardboard character with some absolutely idiotic dialogue.

Unlikeable and dull - pretty much characteristic of what I would expect from a 40 minute maid show. I could write more, but then Id be spending more time talking about the characters than the studio spent actually creating and developing them.

Basically, Azuza does just about what every maid show before it has done: weak-ass comedy. The lackluster plot and characters combine with the decidedly mediocre animation and sound, and one is left with an unusually disappointing overall package. Im just happy the anime cant waste any more of my time than it already has.

If youre one of the thousands of people who actually enjoy maid shows on a consistent basis, then by all means knock yourself out; theres enough tribute to the tired genre to please most of the diehards. However, if youre not a dedicated fan of the genre, then know that this brings nothing new to the table.

The Story in Azusa will Help! seems on the surface to be a half way decent story, but a closer look reveals how it isn't that great. There where several key moments in the plot that just happended for no reason. It seems to me that the story was hurried through at some parts, and it makes it less comprehensible. However, there was a decent plot that was given enough time to make sure that it was explained well enough so that you do not have to stop and say "What the...?". The originality of the idea of robots playing baseball is not that new, but the maid robot playing baseball is in my experience. Another thing is that I felt that there were moments when the storyline seemed too tacky and kind of stupid. Overall it had an ok story.

The animation didn't look all that spectacular, but it didn't look completely terrible. I did enjoy some of the glimpses of the new technology there. The robots did not look all that original and neither did the other characters. It kind of had a bland environment around it.

Azusa Will Help is just a generally bland anime, with bland backgrounds and bland characters. But it did have a comprehensible story. Not the best choice for the next anime to watch, but if you are bored then why not?