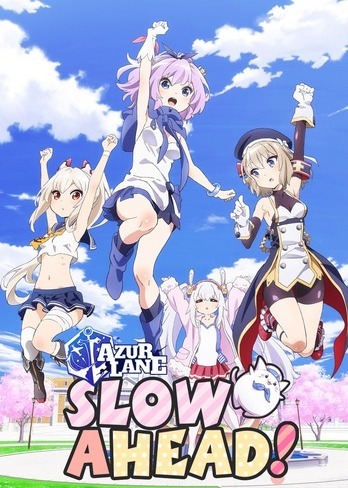 This Candybox/Yostar Picture studios 2021 spin-off from the moe anthropomorphic battleship video game & anime franchise really adds little we didn’t already know. Each of the twelve episodes is barely 8 minutes long and, unless you are familiar with the background to the concept, you would barely know the girls are warships at all. Other than their names their activities are all just cutesy-wootsey and hardly becoming of steel-clads. The girls appear to be at school but don’t appear to be learning a great deal. Most of their time seems to be spent goofing off, having baths, playing computer games, attending festivals, making friends, having barbecues, going to dances, dressing up, cleaning things, going to amusement parks and squeezing each other’s boobs. There is a high oppai content in the show as well as much implicit lesbian activity. Who the intended audience is for this nonsense is any one’s guess. There is little in the way of story. It is just a setup for the viewer to enjoy the antics of pretty young waifus running around and being very kawaii. Oh yes, there are also bunny girls. That tells you everything you need to know really. The story doesn’t need bunny girls or revealing costumes but it has them galore. There are no battle sequences and none of the girls look like they will be going to war at any point in the near future. The show is as vacuous as it is pointless. Enjoy the titillation whilst it lasts. Dull.

If you play and like azur lane then u will like this if not its just garbage without stroy so dont waste time watching it.

Bisoku Zenshin is a huge improvement compared to the first iteration, the short yet funny episodes allow me to understand the characters more than i did when i played the game. Overall its amazing
Laffey is my waifu,

This was quite a good slice of life anime this was better than the first azur lane anime just don't binge watch it watch 2 or 4 episodes a day it will be worth your time.

The daily leisure life of the ship girls from the Mobile Game Azur Lane.  Short episodes much like the 4-Koma they post on social media and such. No story here, just cute ship girls getting into mischief with a bit of fan service. Personally I enjoy seeing the cute less serious side of the girls. If story and action are more your thing the first show might be more for you.