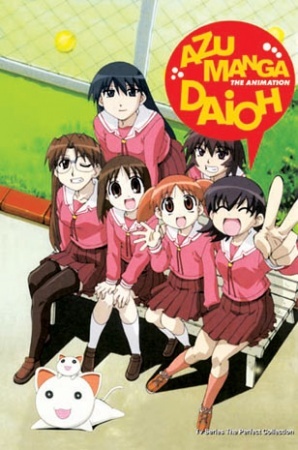 So random!!!!! I just can't help but laugh at any Azumanga Daioh episode or in this case-a very VERY short movie. Story: It's just Osaka having a weird dream about Chiyo chan. To tell you the truth: I have pictured Chiyo's hair falling off before I even watched this movie. The whole dream is Osaka fighting the urge to touch Chiyo's pigtails and when she does...it falls off. Then things get weird. Chiyo's chasing her pigtails to the ends of the earth, but really it's all in Osaka's head and when she wakes up, she finishes the movie with "oh, Chiyo-chan,you got your hair back" everyone just looks at her crazy and the screen says "the end" and Osaka says "and they all lived happily ever after". Characters: It's just Osaka and Chiyo technically, but then you can count Chiyo's pigtails as their own characters too cause they do come to life and begin running around like crazy. Overall: As soon as it finishes, all you'll say is "what the ... just happened?"

Chronologically speaking, the material for Azumanga Daioh:  The Very Short Movie is found in episode two of Azumanga Daioh:  Osaka's Day.  This episode revealed all the mischief the Kansai dialect-blessed character (or southern belle supreme, if you go the dubbing route) can get into.  One set dealt with the curiosity over the pigtails of the student sitting in front of her.  Pigtails which could give Chiyo the gift of flight or entertain the folks with the random twitching of the marvelous braids.

Chronological speaking ... except for one thing.  The series Azumanga Daioh ran in 2002.  The Very Short Movie came one year prior.  So, you might say that this OVA serves as a pilot for the season that would amuse viewers the year following.

You might say pilot ... except for one thing.  The first anime renditions of Azumanga Daioh were a web production of six episodes that was available for anime fans in 2000.

Do I have to mention the manga that inspired all this loveliness?

I appreciated the previous reviewers who liked what they saw, but what was it that they saw?  Just a neat version of Chiyo's magical pigtails which freaked Osaka by falling off, giving Chiyo a page boy which drove the girl to tears.  Osaka tries to reattach the locks, but they decide to bolt for the great unknown.  This prompts Osaka to take on that sacred quest to regain those fabulous strands of Chiyo's girlhood, traveling through mystic realms and other nonsense.  But, with six minutes to play with, we don't get much of a sacred quest.  Short story really shorter ... Chiyo gets the pigtails back.

Strange to say, but the technique for Very Short Movie appears cleaner and more vivid than the 26-episode season, which followed a different course of story-telling which drew on simpler designs to garner just as many laughs.  Here we have a neat concept piece which proves that with a little imagination, you can produce a cast of characters which gives us a comedic glimpse into the zaniness called 'high school years.'

Wtf did I just watch. Huh? I guess this what they call breaking the 4th wall.