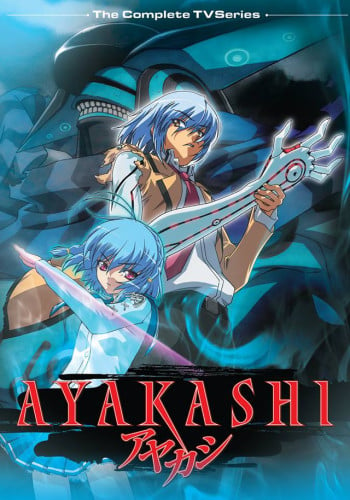 After witnessing a rare summer snow with his friends, Kusaka Yuu begins to develop supernatural abilities. Years afterwards, he finds himself the target of powerful beings, and learns that his powers are due to the "ayakashi," parasitic organisms that grant special abilities in exchange for a portion of the host's life force. The conflict turns treacherous as Yuu’s friends’ lives also become threatened, and he learns the truth behind the loss of his dear friend, Izumi. Will Yuu free himself from the ayakashi, or will he succumb to the temptation of power?

Elfen Lied meets Tokkou. That pretty much describes this series. It has a lot of splatter, along with some psedo-serious aspects, such as people forced to do things that hurt them. But, like the aformentioned titles, the series is just a chain of shocking scenes, unreasonable bahaviors and convinient events. ART SECTION: 5/10 [Cute Japanese schoolgirls, covered in blood.] Visually, the series is fine. Colors and shapes are wonderful; girls in mini skirts and monstrous Ayakashi are lovely. It gets a bit ridiculous if you don’t like the dumb expressions the characters have, or the simple special effects that are used in the fights. The battles also feel “turn based” and without choreography, the monsters are static, and the splatter scenes lack realism. Overall it is quite mediocre once you see it past the pretty colors. SOUND SECTION: 2/10 [-Me kill you. –Me screw you.] It didn’t strike a chord, in any way. Forgettable music themes and lukewarm voice acting is all there is to it. What I didn’t like at all is the context of the dialogues. It was completely stupid and shallow, from one-liners of seduction and threats, to endless monologues full of shallow motives. STORY & CHARACTERS SECTION: 1/10 (spoiler alert!) [-Oh my God, they killed Kenny! –So what? Big deal!] We have an interesting main idea for a story (monsters empowering humans but destroying them in the process). The usual “kids that level buildings with energy beams, without a penalty by the police or their parents” has gotten very tiresome. Then we see them using their powers, despite knowing that they hurt them. That initially feels stupid but then you see that they are either gotten overboard by the power they possess or are forced to use it for helping somebody else. Very nice.But then … the nice premise is ruined by the silly presentation. The anime is based on an eroge. That means that the feeling of having “all the females in the story acting like dumb, squeaky voiced bimbos who want to screw the hapless leading male” is strong. Males on the other hand just talk like barbarians and simply want to hurt or kill the protagonist. The game also featured action and gore, so expect somebody’s head or limbs to be thrown across the screen every 5 minutes. This is NOT part of the story. Just shocking events to lure you into watching more. The story has little sense and the characters behave in quite ridiculous ways. (major spoilers follow) I mean, there is a scene where a villain cuts to pieces dozens of people. The protagonist looks and says “Hey, another Ayakashi user is near.” Get it? Not “Oh my God, he killed my friends!” Then a phycho little girl appears out of thin air and he says “Nah, it can’t be her. She is just a girl.” Very reasonable answer, right? Then the scene changes and he is mysteriously bound with chords in a warehouse. The girl is dressed like a bride and wants to have sex with him. Then another girl (which of course also digs him) is mysteriously freed and summons her Ayakashi to defeat the evil girl. And then the protagonist gets all powerful (a thing he could do anytime he wanted, but didn’t) and saves the little girl because “She is just being used.” Yes, she is just being used and so, all the hundreds of people she has turned into mincemeat are no longer an issue. The girl simply fades into thin air again and the protagonist returns home while caring the other girl on his back, while feeling her legs all over his body… Did any of these make any damn sense to you? It was just 15 minutes of the entire series. You can imagine how it goes from there. Villain women trying to seduce the protagonist instead of simply capturing him and stealing his powers. Characters standing still in plain sight when fighting with Ayakashi that move like the wind and cut people like butter. Totally senseless stuff. VALUE & ENJOYMENT SECTION: 1/10 [You are one cheap whore Ayakashi.] Just like Elfen Lied and Tokkou, this series tries to pass for serious by implementing as much splatter and insanity possible. It even tries to play it mysterious by having secret organizations, the amnesia routine and lost old friends in the background. Which of course is like having a naked woman talking about the injustice in the world. Are you going to listen to her or look at her hooters? Thus, it is just a scam or even an insult to one’s intelligence. I didn’t like it and so shouldn’t anyone who has basic logic or a shead of taste. VERDICT: 2/10 Just play the damn eroge and skip this entirely. SUGGESTION LIST Elfen Lied and Tokkou, if you don’t care about decent storytelling and characters. Berserk and Gantz, if you do.

Plot for this one was pretty good along with the concept of the creatures. It was a basic plot though of the big bad wanting to take over the world at some point and be a god. I did like how the big bad barely got his hands dirty and had a good variety of people to do what needed to be done, but then again it is usually that way with that sort of plot, but it was kinda of different in this one. Animation was pretty good. The only complaint I have about this one is that some creatures had good detail to them and others did not, I would have liked if they stuck to one or the other. Soundtrack on here was ok. There was really only one theme of music throughout the anime and it was the opening theme music. Even though the opening theme is good, I would have liked to hear something different then that and the ending theme. Character development was pretty good. The main character interacted with many in this anime and there are some twists there, but you don't know that till the end. I would've liked to see more interaction with the characters that were behind the scenes, because you know about them, then they disappear for almost the entire series. Overall it was a pretty good anime to watch. I would recommend this one to anyone to at least watch once.

First some items I need to adress. I'm Dutch to expect some spelling errors, if they are to annoying just message me and I'll fix it. My opinion may vary from others and this is fine. People are different so there is a good chance that I will not like what you love. Deal with it. I'm not telling you that you should hate it too, I'm telling you why I didn't like it. I'll try to keep swearing to a minimum but fail utterly on occasion. In general it is the more the anime pisses me off the more I swear so watch out for the low scored ones. Art: Art is pretty awful considering it was made in 2008 but it does what it needs to do and that is to show a visual story. Sound: No real complaints actually, it's pretty ok. Voice actors are good and I don't remember any music either. This is how I generally prefer my anime. Characters: The main character is Kusaka. A young highschool boy whos dream of becoming a champion of justice has never come true. While he does want to do the right thing he aften turns to look the other way. He makes some money on the side using some special power that he has but this often lands him into trouble. Hime is one of his childhood friends and she obviously cares for him. Her mission in live is to keep him in line. Izumi is his other childhood friend and she died 2 years before. Rei is a transfer student who seems to follow Kusaka around and protects him. Kare is a mysterious man who is desperately searching for the Ayakashi called Ryuu for reasons that only he knows. Even his closest associates are left in the dark. Story. After watching snow come down during a hot summer night, things change for Kasuka and his friends. Unknown to them, they are now infected with an Ayakashi. This parasite infects the host and grands it amazing powers but at a price as the Ayakashi slowly consumes the host. Kusaka is infected by a particularly powerful Ayakashi and is trying hard to figure out what is going on and why so many people are hunting him down. Rei, a mysterious young girl, suddenly appears out of nowhere and starts to help him while a man known only as 'Him' stalks him from the shadows. Rant. This anime sucked. In terms of visuals I was shocked that it was made in 2008 but I was happy to see no overt sign of CGI. It looks hand drawn and if it is....well done. It was done cheaply but hand drawn is still prefable over most CGI garbage that they put out these days. Main issue I had is that I really didn't like the main character. He starts out as an asshole and doesn't really improve as the series goes on. Side characters are also annoying and as usual; most problems could easily be solved or avoided by simply talking to each other. I was kind of disappointed near the end though. Monster design was overall pretty good and each Ayakashi is very unique and easily identifiable. The reason for the uniqueness is the fact that every Ayakashi is fairly unique as well as the host determines partly how it will manifest. So at the end many people are infected with an Ayakashi and you see it burst from its host to go on a rampage. Sadly these Ayakashi all look alike or have such minor variations that it doesn't really matter. I would have liked to see them go all out with this part. If you can get past the main character then you may like it. I couldn't and didn't. 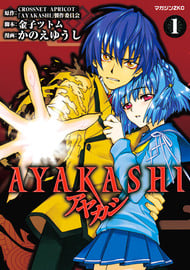