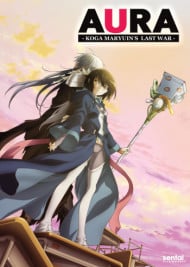 It doesn't happen often that a movie resonates with me the way Aura: Maryuuinkouga Saio no Tatakai did. And I feel that it will hit close to home for a lot of other people as well. Story Ichirou Satou just wants to be a normal high school boy, doing normal high school stuff without standing out too much. That is, until he meets Ryouko Satou, a somewhat eccentric girl who walks around in a weird get-up, pretending she’s from another world, who manages to stir up his so-called normal life. To put it simply, Aura: Maryuuinkouga Saigo no Tatakai is a simple story about two people helping each other get by in a world that doesn’t understand them. It tackles some serious problems like bullying and losing yourself as you try to fit in. Though heavier on the drama than on the comedy, the two elements are both played rather well and neither feels forced. The pace felt a bit weird as the transition between scenes was kind of jumpy at times. The ending was amazing, in my opinion. I didn’t feel like I cared that much about Ryouko’s problems, as the way she acted struck me as spoiled and delusional. And then those final scenes happened and I couldn’t help but sympathize with her. Because, even if you can’t relate to her specific problems, there’s a little bit of Ryouko in all of us. Her speech, and Ichirou’s as well, really struck a chord with me. Animation The animation definitely had its ups and downs. The biggest problem was probably the consistency in the characters’ faces. When in close-up, everything looked pretty gorgeous (I loved how the eyes were drawn), but when it zoomed out a bit more…   You have a little something on your face… Of course, I wouldn’t say that it was bad. The quality just suffered a bit, from time to time. And there were definitely also a lot of stellar shots as well. Some of the backgrounds were amazing and the lighting in the final scenes was really good. Character designs were pretty standard, but I liked them a lot nonetheless. They managed to make every student, even the minor ones,  look very distinctive. Colour palette was really subdued, nothing flashy or particularly bright. Most scenes took place during sunset, dyeing everything in an orangey hue. Sound The OST for Aura is awesome, it really is. There are some epic pieces in it that got my blood pumping. But did it fit the movie? Eh… Music should be there to spice up a scene without demanding all the attention. It should carry the story without being overbearing. And I personally think it failed in that respect. In other words, it’s just too awesome for its own good. It’s shoved in the viewers’ face and distracts from what is actually going on. Nobunaga SHIMAZAKI did an amazing job as the protagonist. He displays  a wide range of emotions in a very believable and sometimes heartbreaking way. Kana HANAZAWA seems to be getting typecast a lot as the monotone stoic, but she’s good at it. Characters Ichirou Satou is one of the most likeable characters I’ve seen in recent anime. He’s cute, he’s badass and knows what he wants yet he also struggles with himself. And those struggles were very real and relatable. Wanting to fit in, but having to change who you really are. Wanting to be yourself, but afraid of not fitting in. It’s interesting to see how he deals with all this and how he grows as a character. And the dude looks hella cute when he blushes And then you have that other Satou. I wish they had shown more of who she really is, more of what was going on in her life.  I can sort of get where she comes from, but a little more backstory would have made her an even better character. The best thing about the movie is how these two interact. It’s so sweet and makes me feel all fluffy inside. Their dialogue flows really well. The rest of the cast is quite a weird and eccentric bunch. There are a lot of minor characters who are never really expanded on. They add some colour to the story, but not much more than that. In fact, I thought the other ‘Dream Soldiers’ were kind of annoying. But that may have been the point. Overall Aura: Maryuuinkouga Saigo no Tatakai is a weird little thing. It’s an interesting mix of cute, cringe and sad. What makes it stand out, is the fact that it’s recognizable even if you haven’t been in this exact same situation.  Everybody has felt the need to escape reality, has wished they were someone else. The movie manages to reach out to us and tell us that it’s okay to be who we are. The climax was appropriately epic and almost managed to bring me to tears. And though I didn’t expect to be moved by this anime, I totally was. Go watch it now.

Really good movie, this is relatable on some level to most people so that aspect of it really did make me enjoy this movie would definitely recommend for everyone to watch.

Hidden gem, somewhere between Chunibyo and Silent Voice. Wish we got to see the bullies get something in return, but other than that, worth a watch.  Loved it. 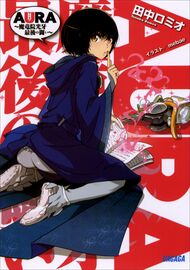 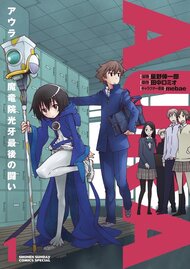