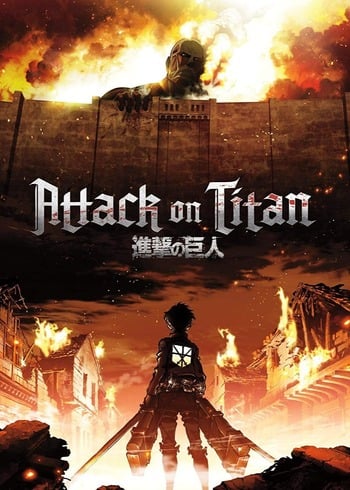 Besides Knights of Sidonia, imo there isn't a single better recommendation out there for Titan than Green Worldz. Period. The plot and environment is not similar - but trust me on this one, it is INCREDIBLY similar as far as the mood and feel, the very creepy and scary monsters/gore levels, the protagonist who watched someone die brutally and wants to become stronger to save others, everything. Some of Green Worldz' shocking death scenes are extremely similar to how the Titan manga is portrayed as well, with a few panels shown in succession from the monster's 'ah ha, I see you' moment to the character noticing, to them being viciously eaten.

I have recommended basically nothing with Titan because I don't believe any of the top recs (Claymore, Berserk, Deadman Wonderland) are good at all except on a few stretched points. Those recs seem to me like they're done as 'best options' since there's nothing better. There's finally something better. Titan and Green Worldz are a PERFECT fit.

If you want to see more of humanity being devoured by gigantic creepy monsters, look no further. Attack on Titan and Green Worldz may as well be twins. Sharing a very similar atmosphere that is both dark and thrilling, they boast a lot of violence, gorey deaths, and a fair amount of twists and turns. The main protagonists (Eren and Akira) are also quite the same, as they passionately vow to fight and survive after witnessing a horrifying tragedy. These two go together hand-in-hand, and you won't want to miss out.

Shy Ken Kaneki is thrilled to go on a date with the beautiful Rize. But it turns out that she’s only interested in his body—eating it, that is. When a morally questionable rescue transforms him into the first half-human half-Ghoul hybrid, Ken is drawn into the dark and violent world of Ghouls, which exists alongside our own.

There are alot of similarities between Attack on Titan and Tokyo Ghoul including the idea that humans are food. the main characters are both attacked by monsters and their lives are drasticaly changed because of it. In attack on titan eren and the gang then dedicate their lives to fighting these monster while in Tokyo Goul the main character has to fight the monster within. both shows will have the familiar sounds of poeple screaming, people dieing, people throwing up, and people fighting for their lives. If you liked one you will like the other. These are two great shows and I cant wait to see more of them both.

they're both nearly as bloody, and they both have an amazing storyline, which as well keeps you sucked into the anime, action is a very must in these anime, with little romance

After humanity’s first manned mission to the Red Planet was lost, a second expedition arrives. The explorers prepare to exterminate the cockroaches that were used to transform the Martian environment, but are shocked to discover that the insects have mutated into giant, aggressive humanoids with one overriding goal—exterminate the humans! However, this crew of explorers has each undergone the “Bugs Procedure,” terrifying experimental surgery designed to make them more than human…

To sum up these two series in one word: Badass.

To explain why in more words: Humans carving up giant ass Titan things with their blades and grapple hook gymnastic... transportation things (AOT), humans sometimes punching the heads off cockmanroaches or tearing them apart with their bare hands (Terra Formars). Things getting the living crap beaten out of them, fast paced action scenes, long ass fights where all sorts of awesome shit happen, holy crap the action...

Action so much. Where humanity stands up to a more powerful foe with the tools they have and do it's best to kick it's ass before they die horribly. Sacrifices are made, people die and nobody is immortal. But they are damn fine. Violent, visceral, they hold no punches as the body count rises and things just get more awesome while throwing wrenches in the machine to spice things up. Suffice to say, both are worth your time.

After a catastrophic epidemic kills every adult on earth, vampires arise from the shadows to enslave the remaining human population. Yuichiro escapes from captivity and joins the Japanese Imperial Demon Army. But before he’s allowed to fight vampires, he has to complete his first, terrifying mission–make new friends with his fellow aspiring monster slayers! Yuichiro and his friends are kept as vampire fodder in a creepy institution masquerading as an orphanage. One day, Yuichiro’s dreams of fighting back are realized when the orphans stage a daring escape. But things go horribly wrong, and his dream is kept alive at a cruel price.

Hot-headed protagonist out for revenge? Check. Humanity must face overpowered enemy? Check. Secrets and hidden agendas everywhere? Check, check and check. Owari no Seraph is basically what would happen if Eren Jaeger had to kill vampires instead of Titans, and if the Survey Corps had cool black hats and capes, instead of leather jackets. If you're looking for an action-filled shounen that doesn't shy away from a severed limb or two, then look no further.

Set in a ruined world overrun with chimerical creatures where the female creatures eat the males. Two creatures explore the land: Usagi, the elder sister, protects her brother Mitsuki, a curious chronicler who is able to read the books in their secret hiding place to know that the world was once different.