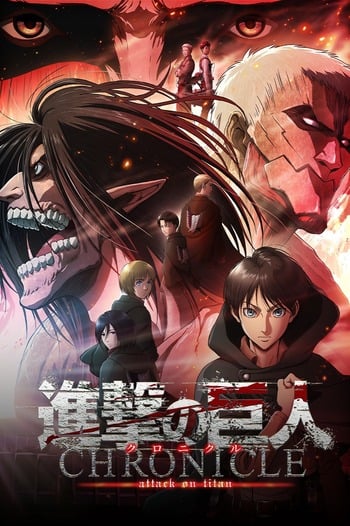 If you're looking for manga similar to Attack on Titan Movie 4: Chronicle, you might like these titles.

A prequel series to the number one bestseller in Japan. Humanity has learned to live in complacency behind its high walls, protected from the giant Titans. But when a Titan-worshipping cult opens one of the gates, a Titan wreaks havoc, consuming the cultists. After the rampage is over, two young Survey Corps members are shocked to discover a pregnant woman's partially digested corpse—with her baby still alive inside it! What will the fate of this "child of the Titans" be? And how will humanity learn to cope with the Titan threat?

Levi, Isabel, and Furlan live in the underground city beneath the royal capital. But a chance encounter with Erwin Smith soon changes their lives forever...

What we want is just one "death". Creative Street (Grave Yard) is a city where all corpses from all over the world gather and the economy is established. An immortal cadaver, Karon, who lives on the outskirts of the city, and the grave guard Moto. A strange "corpse" that can't be handled elsewhere is lost in the two ...The dark fantasy that begins with the death of a “twisted” creature between life and death begins.