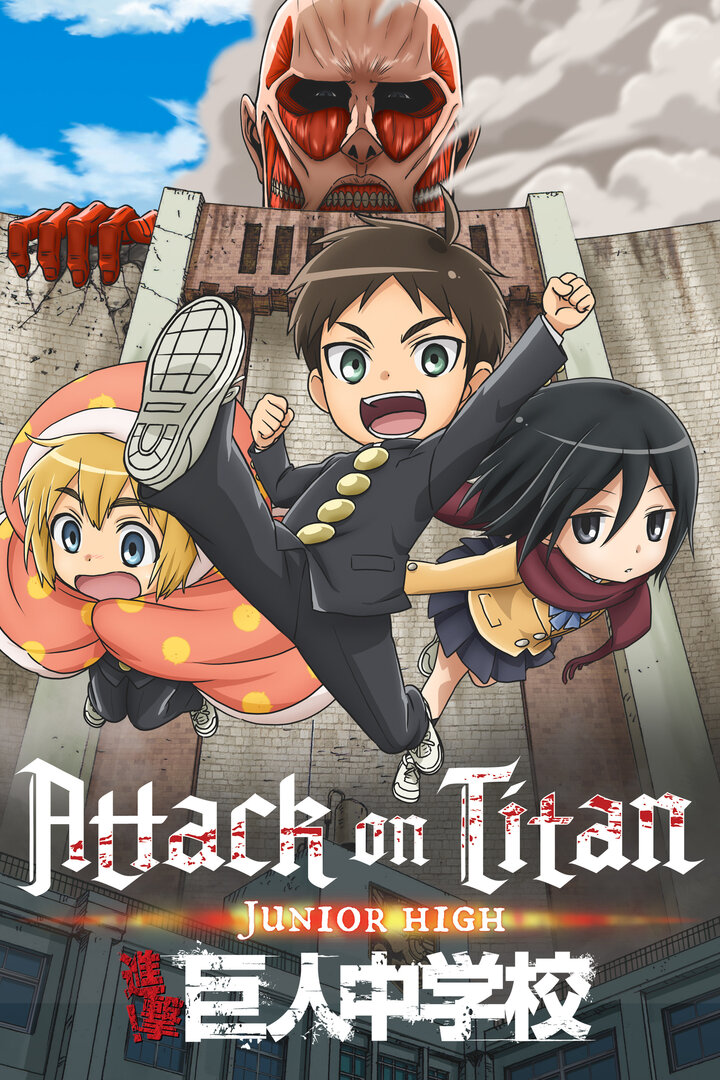 This review is as of episode 5, my views may or may not change by the end of the series, if my opinon does change, so too will this review.

The story, while entertaining, is confusing at first, not a lot of detail goes into telling us what is happening in this school life version of AoT. Though I probably shouldn't expect a fully comprehensive story out of a parody, should I?

The animation on this is downright exceptional considering this is just a short project to keep fans happy until season 2 is released. It is fluid and manages to capture the right moods in the right ways.

They used music from the original series, which is nice, but the remake of the opening seems just a bit much, I understand that they are trying to capture a different mood with this series, but I would honestly prefer the opening to either be a new one, or to recycle the original opening music like they did for the rest of the soundtrack.

The characters are exactly what they should be for a middle school, school life anime. Cute, almost chibi type characters. They did a good job emphasizing the main feature of each characters personality. The only reason this did not get a 10/10 was because I did not appreciate how they made Armin. Something about the way they portrayed him just irritates me.

This anime highly reccomended by me. If you are a fan of the show, and have a sense of humor, this is perfect for filling in the time until season 2 of AoT is announced. I hope that this will continue after season 2 of AoT is finished. I would love to see how they address all the characters and all the development that takes place later in the show.

At first I thought this could be interesting and maybe a little funny. I watched several episodes until finally deciding I wasn't interested.

1. It is totally ridiculous

2. It's a nice idea and kind of funny but als boring and predictable

3. I probably would have quit the show sooner except there was so little to watch the fall season I was willing to try anything that seemed even slightly okay.

4. I couldn't get over the titans wanting lunches and kids being so uptight about losing their lunch. It just seems to ridiculous.

5. The contrast between the original story and this parody of it was too much. The riginal was too serious and dark and trying to adapt that story and make it a light hearted comedy abut high school kids and some super giant bullies who want to steal their lunches just feels like too much of a stretch.

6. I got a few good laughs but it wasn't enough to keep me coming back. I couldn't stay interested.

7. They should have just hurried up getting the second season out and not even bothered with this.

If you love Attack On Titan then you will probably like this series. It's a fun show to relax and watch, for a spoof on a really dark show, I think they did a really good job.

I love this anime it is perfect if you need something to cheer you up after season four of attack on titan. It is extremely funny, Its really cute, Perfect comedic relief. This is a great go to anime to cheer you up. Its attack on titan but the titans dont kill anyone. Overall great and would reccomend

I don't know. The animation and sounds were really well done, but the series was lowkey cringy. I know it's supposed to be like a parody of the actual show but it was kinda painful to watch. But I almost had a heart attack when Levi sang.