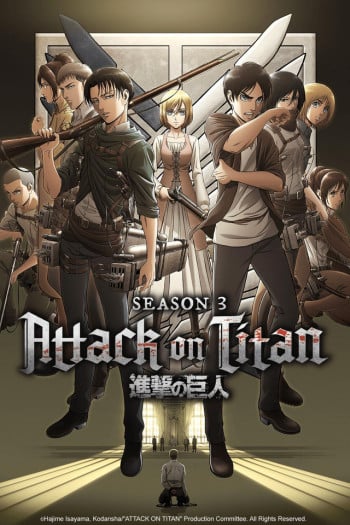 The first and second season of Attack on titan was fantastic, its fast-paced and were filled with action and brutal fights. Although the third season had similar results. Its plot fell off for my interest. The story started focusing on the strength of the main protagonists and gave them abilities that no longer made things suspenseful, their abilities alone made everyone's existence pointless due to the skill gaps between characters. Overall the third season was still an enjoyable watch and a well-produced season to the Attack on Titan trilogy.

I've been a huge AOT fan since the series first was released. I watched the first two seasons in a few days after the second season was released. This was during a particularly difficult time in my life, and so I attached a lot of value and love to the characters who helped me get through some of the toughest mental health struggles I've ever had to face. I built myself a 3DMG for a Sasha cosplay - it was my first time ever doing a large-scale construction for cosplay and was poorly constructed so it fell apart at the first convention I took it to, ACEN. However, I still had that attachment to the characters and it made me so happy to meet with other fans of the show.

Unfortunately, I don't believe the third season met with my expectations, and sort of tarnished my golden relationship with the Attack on Titan series.

I'm unsure whether it was the fact that we had to wait for so many years and I forgot why I cared so much about the show and its characters, or if it was the season itself just not living up to the wait and the hype. I'm thinking it was probably a combination of both. I know why they waited so long - to keep up with the manga - and I'm glad they did, since I've never been a fan of anime that try to release ahead of the manga, because they're usually full of pointless filler. But I think it was just too long of a wait this time. The hype had died down so much that it didn't feel like anybody cared anymore. I didn't even know the third season was out until a few weeks after.

The way that the show chose to focus on the politics, too, I felt strayed from the formula of what made AOT so likeable in the first place. We liked to see the characters grow and change as they fought these horrific beasts that traumatized them, but also brought them closer. We enjoyed the suspense and heartbreak of seeing our most beloved characters almost die, or actually die, or fake-die. There was genuine concern in the fanbase for characters who were left in a state of not-sure-if-they're-going-to-die at the end of an episode. I felt like that genuine concern had faded by the time season 3 came out. I didn't find myself feeling the visceral reactions I had during the first two seasons when a character would do something outrageous or risky and would end up better for it. I felt like I was watching a historical drama instead.

Amidst all of this, however, the animation. absolutely. slays. The scene where Levi is using his 3DMG through the streets of the city and the camera is moving around him as he ducks and weaves and spins was probably one of the most beautifully animated scenes I've ever seen. This stays true to the fast-paced interesting animations of the first two seasons, and made the show pleasant to watch.

Overall, while the third season definitely was not what I hoped for, it was faithful to the manga, and was still enjoyable to watch. It just didn't capture that 10/10, raw emotional terror and joy that the first and second season managed to capture. I'm not saying don't watch it - it provides necessary closure and wraps up the story nicely, although there are a few holes still. This is to be expected of AOT at this point though - I believe they enjoy leaving certain story elements to fanbase interpretation. Just don't expect to be floored like most people were with the first two seasons.

So this is for seasons 1 through 3! I love this show so much! It is full of action and amazing characters! It also has a plot that keeps you guessing! It really kept me on the edge of my seat. I love watching the characters grow throughout the show. Seeing where they were and where they are now makes my heart ache with both sadness and happiness.

this season just focused on internal affairs inside the walls and I believe that they did a great job on script and showed that Attack on Titan can be great without Titans and I believe this part was very crucial and showed political problems and very reletable to reality and I know everyone wants to see Titans but story is also a thing . Look at Tokyo ghoul ( re) they cut the story and ruind the show even though they showed so many ghouls . Many people say it's boring ,but for them let them know that this is the calm before the storm and the next arc is going to be awsoooooome as f**k.

Ok, so basically I LOVE every single character in Attack on Titans, but I can't choose between Eren and Levi as my favorite.

Eren is hardheaded, strong-willed, passionate, and impulsive, which are attributes of his strong determination to protect mankind which makes him a very inspiring character for the viewers but also for the people surrounding him. Eren can be so determined into doing something that he starts to have limited self-control and as a result, he could bring a lot of trouble to himself but more importantly to others. His anger could drive him into horrific levels of violence. Even though, this trait can be a problem it is also a part of who he is and great things have come out of this.  Compared to Levi, Eren's level of strength and capacity are nothing but his strong grit leads him to do amazing things. Of course in his Titan form, Eren becomes the ace of the squad because of all the things he can accomplish with such little effort, his Titan form is a real benefice to the team. In terms of look, Eren isn't that bad looking and a thing that I love about him are his eyes because they show so much emotion and usually emotions that just by looking at his eyes it gets me scared. Although, Eren has a lot of courage and conviction he can also be very indecisive and a wimp.

On the other side, Levi rarely shows emotion, even in moments of bloodstain and misery. Even though he may not seem very sensitive, Levi does feel grief and sadness in moments of loss but as a captain, he is forced to stay as calm as possible in order to stay focused and protect the rest of his team. This is one of Levi's best characteristics and one of the many reasons why all the people around him treat him with great respect and trust. When Levi believes in something he won't hesitate to do everything in his power to fulfill that duty, he can easily get his hands dirty if he feels the right to. In order of strength, Levi is known as the strongest soldier in the country and he has unquestionably good combat skills. In terms of looks, I think Levi is really good looking and I'd say his pissed face looks even better than when he smiles which is really rare anyway. Levi is also known to be a clean freak but I think it fits with his personality.

anime-planet it would be nice if you guys can work on the dub version for seaon-3 part 1 and 2. its hard reading subtitles and trying to pay attention to whats going on

Loved the continuation of the story, all the questions that were answered and Levi's backstory but COME ON. Seems like they are just rushing along. For me, it did not have the dread, distress and edge of the previous two seasons. I was on the edge of my seat.

That being said, the fights scenes between the scout regiment and their hunters is amazing. This anime still is unmatched in certain areas, I just wish they would get the writing and characters back on point.

So, 3rd season, I liked where this one was going and was not short of action and intrigue. You got to see some major players that were in the background the whole time and got some stuff figured out, but then you had more questions. Which is ok, because I liked the whole situation of this season, mainly showing that Titans are not the only enemy out there.

Animation and sound always on point as always and the opening credits were great. Loved hearing a song by Hyde on there, just so awesome.

Characters had in depth issues and backgrounds, was happy to see some of the secondary characters get a good background explanation on their own personal experiences and how they came to where they ended up at.

Overall I loved this season and look forward to more.

Wow no review's yet. Lit.

So season 3 AOT throws a ton of new information at the viewers. Thats right guys we finally got some answers to the bigger questions. BUT there is still a lot of questions, they ain't playing that nice yet lol.

This season is really amazing, like its a lot but I still loved it. Honestly though, are we really using 'bloodlines' as a plot right now. -_-

Historia is honestly like a huge player in this season. Its crazy how unimportant I thought she was in the beginning compared to how she is now. She really is a totally different person and I'm loving it. She's grown into such this amazing and likable character that I wouldn't mind if her and eren paired off. Mikasa & Eren for life though. (doubt it will happen but I can dream XD).  Her family and her bloodline are so important to the foundation of all our questions its a pretty big twist. Also apparently Mikasa is so cool for a reason? Who knew right!

The art in this season really has grown and you can see the growth in all our scouts we got to know starting in season 1. I also think their foreheads are also shrinking in size, but I'm not sure.

The soundtrack as always is bomb and the opening is freaking so beautiful and tranquil in this season its like...why is this so beautiful and the show is so...death. It really tugs on your heartstrings for the main 3.

I loved everything about this but that being said it does have flaws, like the bloodline stuff. Its just a  'for lack of a better explanation' kind of thing. But they still addressed it pretty darn good.

And that ending tho, ugh, can't wait for the rest!