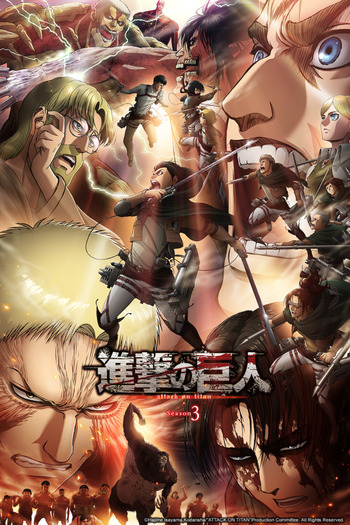 Ugh man, there's only one season left after this *tear*

Attack on Titan season three part 2 answers soooo many questions it leaves you reeling and trying to remember all the tiny things that had happened in previous seasons that have finally led up to these realizations. Even now I think about characters long gone and their reactions to things and how they now make so much more sense. Granted there are still things to be solved and answered, but for the most part we now know so much more then when we started. We finally got to the basement this season!

The power of the characters as they evolve and make tough decisions is so amazing and the heartache in this series is far more amplified as it feels like it gets darker with every passing episode.

10 out of 10 character development

And honestly one of the best stories ever written/adapted.

NO SPOILER - As before, the AOT did not disappoint me. Once again I found emotion, violence, hatred, revenge in the story, but also friendship, bond and, above all, victory. I can't say I didn't know any of the real truth about the titans or the origins of them, but even so, the truth was far more serious and frightening than I'd thought. Anime has once again exceeded my expectations and I can't wait for the next series.

I will certainly look at AOT films and OVAs in the near future, because it is always a very interesting and exciting experience. I would really recommend this anime to anyone with a strong temper who is not afraid of blood and death, but who has a firm stomach. AOT really gives you a lot and also teaches you a lot and that, I think, is really great about this story...

(spoiler free review) this season is brilliant. So many answered questions. It felt more like a grand cinematic ride than just an ordinary show. This show is especially brilliant for the younger generation because it makes us think. Throughout the seasons ive grown to care quite a bit for the lovable characters & was eager to see what becomes of them in this one. Now i am eagerly waiting for the final season. A criticism i would make is at times the plot is a bit confusing/convoluted so I had to rewind & think about the situation a few times. But its fine, good excuse to rewatch the show.

The anime plays with a viewer's sense of anticipation well to the point where I would be transfixed with whatever was going on at that moment, and as soon as an unknown factor came into the picture, I would be left dumbfounded. For example, in the 5th episode, the Cart Titan appeared and carried Zeke away, but I was just so absorbed with Levi's abilities and the sudden rush of temporary victory when he had the Beast Titan's pilot at blade point that I completely forgot that Levi never killed the Cart Titan.

The element of surprise is the anime's biggest advantage. They have an original story, and they can weave it however they want. With that said, an episode can fall flat or become memorable. I was at awe when the mass Titan transformations happened in the very 1st episode. I didn't entirely understand how Zeke got a hold of a lot of them, but I didn't care. Epic moment (for me) right there.

An eye for detail is as important as looking at the big picture and making sure that all set pieces are in place, no matter how small. Their animation is already great--from how the characters use their ODM gears, to how the Titans move and twitch. But what stuck with me the most (and my most favorite scene, animation-wise) was when Levi, Hange, Mikasa, and Eren entered the basement, and they lit a lantern. The light spilled outward. Just that scene alone was enough for the hairs on the back of my neck to stand up.

I'll start with Armin. One of the best characters in the entire series. He convinced himself that he was a coward, but time and time again, once he would come up with a plan, he would even go as far as sacrificing himself to see it succeed. He has grown to be a reliable strategist, and when he got burned, I almost stopped watching. "They can't just kill off Armin! THEY CAN'T! HE HAS TO SEE THE OCEAN! AAARGH!"

Levi has a serious disposition but says the funniest things. Hange and Sasha, as well, are a welcome comic relief. These three are strong in their own right, and their distinguishable personalities made them my personal favorites.

And with that, I think Eren is the most annoying person overall. If he isn't shouting, he's crying, and vice versa. Yes, he has gone through a lot of emotional trauma, but, as a character, I just don't have love for a protagonist who admonishes himself on almost every scene he's in.

Attack on Titan still makes the same mistakes it has been producing since 2013.

Attack on Titan would be so much better if they combined seasons 1 and 2 into a 20 something season — cutting out a lot of unnecessary context. Also, combine some parts of season 4 with season 3 — cutting out a lot of excessive context in season 3’s parts. If they did that, Attack on Titan would have the best pacing of any Shonen anime I’ve ever seen! I might have to deprive it of a high spot in my top ten list because of poorly written characters and terrible pacing :(