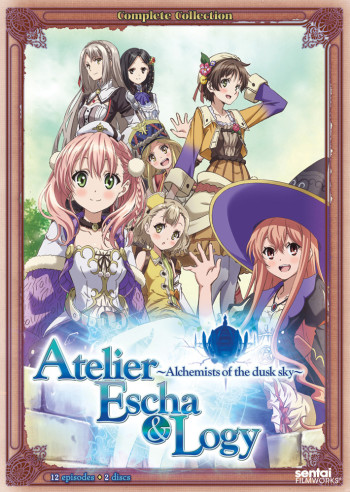 Atelier Escha & Logy: Alchemists of the duck Sky is definitly an average even going somewhat below average. Like usual the anime started of pretty good, the first few episodes were the best and well then it fell apart!

The story was pretty difficult to follow but it still followed one aspect we were given at the start (the girl wanted to visit the ruins). But there was just too much missing! With the intoduction of new characters while not even knowing much about the main characters or "starter" characters, it just added to the confusion. And although we knew bits and pieces of infomation it just became a big mess in the end.

Characters were definitly introduced too fast and with not enough time. We knew only basic infomation and no developement....oh wait a minute episode 10....you know near the end of the season by which i almost gave up watching.... So yeah. However i did find that the character desighn was really unique. I will say that i enjoyed the fact that there wasnt too many extras or "background" people. There was only a few times that they popped up and i think this was a great idea.

The animation was pretty good too. There isnt too much to fault about it actually. The only thing i would say is around episode 11-12 when they attempted what seemed to be 3d animation (idk if it was but trust me it wasnt that good) for a small part of the graphics. However for the majority of the anime the animation and the colors are visually appealing and definitly one of the better animations i have seen.

Now the Soundtrack....Wow did i love this soundtrack. The music definitly fitted the scenes and the opening was catchy. I actually didnt skip any parts of the intro which is rare. All the voices for the characters suited them and i dont think there was any voice i didnt like.

Over all id say that this anime isnt the best and would probably recommend it to anyone looking for a gap filler or just a "Im Bored" anime. If your interested in aviation or alchemy etc i would suggest giving it a go since the actual theme is quite unique in my opinion. I'd also recommend this for newer vewers or the younger audience since it is very light.

A review of Escha & Logy no Atelier: Tasogare no Sora no Renkinjutsushi

Review number three and I’m writing this on the world otaku day! (15 desember). I thought, what better way to celebrate than to write an anime review. The anime I’m reviewing this time is "Escha & Logy no Atelier: Tasogare no Sora no Renkinjutsushi".

HAPPY TIMES: For simplicity's sake I'm gonna refer to the anime as "Atelier". Atelier is the kind of anime that is nice to sit down and watch when you have nothing better to do, and just want some relaxing entertainment. There is next to no fanservice (only in one episode), almost everyone are the "nice" guys and there is little fighting. Just some nice and clean fun.

STORY: Atelier has things like fighting, but instead invests most of its time to show off its characters doing all kinds of different stuff. It's a bit like a fantasy slice of life show at times. Our two main characters are 15 year old "Escha" from Colset and 18 year old "Logy" from the capital. They join the R&D division in the town of Colset and do different requests for them. Colset very much earns its money from the apple orchards that Escha's family takes care of. Quite a bit of time is spent finding materials for alchemy and then crafting them to complete different requests and for personal aid. There is not much of a plot until the last few episodes, but rather some small situations in different episodes, often with little connection to each other. Above the town of Colset there are ruins called "The unexplored ruins". It has always been a dream of Escha's to explore these ruins, but it has never been possible to get to them because of all the wind and debris. This is where the plot really kicks in later, and maybe it's not that impossible anymore.

CHARACTERS: The characters in Atelier mostly consist of nice people, and there is almost nothing that gets close to being evil. Despite most of the characters being very likeable, it is also one of the series biggest downfalls. It lacks that excitement you get from having the main characters face off against evil guys, there is just very little conflict. Only in one episode do we get someone that acts like an asshole, but that's it. Character interractions are often rather sweet and innocent, but a tad boring at times. We got to know about both Logy's and Escha's pasts, quite a bit more from Escha's though. Other characters in the anime include the cute and likeable witch "Wilbell", her friend "Nio", R&D office worker "Marion", R&D swordwoman "Linca", air balloon mechanic "Awin", awesome housekeeper robot "Clone" (she has a human design) and still plenty more characters. They are all likeable, but they are a bit one dimensional without having any villain or conflict to really solve contend with.

SOUND: Atelier is not that special in the sound deparment. The soundtrack is nice and does what it has to, slows down to a sad tone during emotional scenes, upbeat when needed and pretty good and fast paced during the few fighting scenes that there are. The song in the opening is pretty and has some decent rock, good opening song overall. The ending song is very nice and soothing. Great vocals and great musicianship from the rest as well. It fits the series very well. So far there only seems to be a subbed version and it sounds good. Logy and Escha among several others got really talented voice actors and it really helped the chemistry between the characters.

ANIMATION: Atelier undoubtly looks very pretty, everything from the scenery to the characters are really nice and it feels magical. The movements are not the best, but they are animated well enough, and actually look solid when needed. Character designs are a big strongpoint, many of the characters have varied, nicely colored and pretty details. The winner in this category is easily Escha. She even has a tail at the back of her skirt. Everything just screams magic and fantasy. It's kinda sad how many of the other character's outfits look boring in comparison to Escha's, despite having nice outfits themselves. The animation for the opening is very good and it keeps a nice mix of scenery while showing off its characters. Animation in the ending is also nice and it has some beautiful scenery.

OVERALL: I'm happy I chose to watch this show, it was worth my time. If you want a relaxing and inoffensive show with great looks, can tolerate a bunch of nice guys and a mediocre plot, then you can do a lot worse than watching Atelier. This series is suitable for most ages if you exclude that one fanservice episode. So when you find some spare time I hope you will consider this show.

So I started off this anime and I really liked it, it kept me interested until say the last episode and then it just kinda quickly wrapped up.

The story for me was a 8.5 becuase you could tell it was forced a few times as they were trying to base it off of a game. You could tell when they hit a major quest or a final boss just by how they acted. That and the way they do alchemy was a total game mechanic. One big pot of blue liquid, add ingredients needed, wait so many hours and then IN the pot it makes whatever your recipe called for. Cute idea for a game, but in my opinion it didnt fit for anime at all. Escha's tail was a cute idea too, but they never fully adressed on what made it work. Which I'm sure is something everyone would like to know.

Sound was really good and I loved the OP song.

The characters, while really good didnt have enough development for my taste. This anime aparently happened after the 14th book which is where I get confused becuase I had never heard of this game before. So yes they helped out by telling you who they may have been refering to when talking about someone off screen but you never see a pic of them. That and Nio and Wilbrem(?) have next to no character development out of all them. At least with Clone you see some of her past and her present with Escha's help.

I give this anime a 9/10 only because it was very cute and fun to watch. I actually enjoyed it becuase of the main character Escha and Logy's relationship. The reason why its not 10/10 is because I am not happy with the ending. I'm asuming its a continuation from the anime being a game but thats not how you end an anime that wont get another season...

If you like cute characters and game->anime animes then this is the right anime for you!

I enjoyed the beginning of this anime a lot. Sadly though, I started to lose interest towards the end of the anime as it grew to make very little sense.