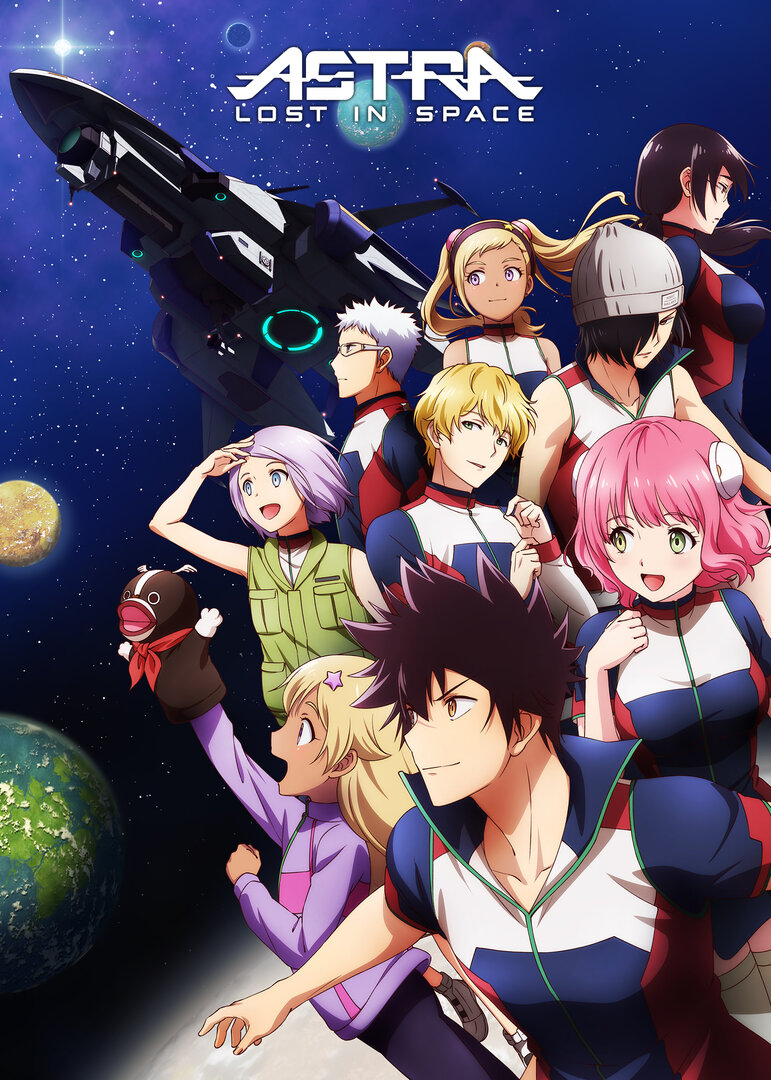 DISCLAIMER:  I wrote the majority of this review during the season as episodes aired weekly. Therefore, any significant details were left out in order to avoid spoilers. If the review seems vague then that is why, but trust me, the anime is worth a viewing, especially if you like Outer Space Sci-Fi anime with some unexpected developments.

Set in the future, a group of nine teenage students set out on an outer space "camping" adventure to planet McPa. However, they suddenly find themselves transported far away by some mysterious sphere. Thus begins the journey of finding their way back home, but only through a series of trials and tribulations, adversity, and some unexpected surprises.

There are a couple of interesting plot twists that develop midway into the series and beyond. The surprises in episode six, damn!

Overall, it's fun, humorous, and engaging enough to look its audience looking forward to the newest episode every week.

The art and animation are not top quality, but they aren't at the bottom either. Artistically, Lerche did a decent job if adding in some pleasant colors to what are more simple character and background designs. In terms of animation, it is fluent and smooth looking. However, the most annoying thing is the fluctuations between aspect ratios that happen throughout each episode at various times. It does add some additional dramatic elements, but it's an overall annoyance more than anything.

OP and ED are fine. The music and sound effects during the episodes are above average.

The individual character developments nicely without anything feeling rushed. The crew is a diverse cast from all different backgrounds and fields of study. The relationships that they are building with each other grows stronger and more intertwined through each new episode.

As the series progresses, a few elements of surprise come about with some characters that go in-hand with the surprises in the story development.

Lastly, here's a quick mentioning of just a few characters show the ability to stand out:

A solid offering of anime especially for any one who likes the previously mentioned outer space, science fiction themed anime. It reminds me a little bit of the older live-action TV series Lost in Space. I enjoyed the show as a kid and that's a positive comparison for this series.

A coming-of-age story set in a science fiction setting. This is the true identity of the show. Few anime possess the charm like Astra Lost In Space has, and even fewer possess a much rewarding conclusion like this show has. This show is not perfect. Like all pieces of art, it has flaws, but it is a goddamn delicious treat.

With a solid story from start to finish, the episodes do not feel boring at all. Although, this show cheats me into looking forward to the next episode due to its constant cliffhangers. Nevertheless, the series becomes better as it goes on, unraveling many deep twists and touching a bunch of subjects you'd never thought they will.

The flaws of this show is that it gives a "sci-fi lite" vibe. The science fiction aspects were never discussed deeply, but it never feels lacking either thus you can pretty much fill in the gaps using inference.

Overall, this show is among the most unique in the massive pool of anime series that have released over the years. With consistently good art, soundtrack and a cinematic-like experience, this will entertain you.

Beautiful artwork, great soundtrack, and deeply touching character backstories and relations. An excellent balance of comedy, drama, and excitement. It never gets boring. The conspiracy bit seems like it's shoehorned in to add extra motivation for the crew to return home and while it feels entirely unnecessary throughout most of the story, ultimately serves that purpose. I think that it could have been handled better, though.

I recommend this to anyone even if you aren't into the whole space exploration thing. That's just the setting for this anime that has so much more to offer in every other regard. The ending is satisfying and leaves little for want. Not an easy feat. Overall 9/10. Will watch again.

Well i loved this anime it is intriguing in it own way with a surprising clone plot that i really didn't expect and the characters evolving amazingly each character is completely different and with its own personality the only thing is i feel that they rushed the end and everything smoothly for them at th end that is the only thing that kinda doesnt feel very well afer all that happned that is the happ ending but i think one more episode would have been apreciated it certainley would be apreciated if they add and extra episode as and extra edition or soemthing to get a liitle more closure and explenation even though it was very ggod all the clousure was done in on episode thye arrived in one episode and then they got everything to go they way it was nice after all but kinda rushed. The story may start slow but after some this gets you  hooked and intruiging i dont know if i am putin gthe rating to high but this is my rating a solid 8.5.

This is  my first anime review , but  i felt like I really needed to rate this one. Astra lost in space is one of my favourite if not favourite anime ever. It isnt perfect and does have some flaws and cringy shonen moments , but the overall story and feeling of the anime is really good . I would really recommend it.

To be honest the storyline is one of my least favourite parts of the anime , due to the ending , which I felt was a bit rushed with all the plot twists coming in at once. Even thought the plot twists themselves were quite good , some of them were rushed , and therefore a bit hard to understand. ( I had to rewatch a certain scene a few times to understand it.). The ending of the story also felt a little to simple. Even though i have nothing against happy endings , I felt like what the whole storyline had been building up to just never really happened and the characters never really struggled one final time to win their battle... However , on a positive note , the setings and the build up of the story are really great. The futuristic cities in the anime have a kind of cyberpunk style and  really make you dream and wish you were there.

The animation was quite good, nothing to complain about , there werent any failed scenes or facial expressions and the cities and outer space planets were extremely well drawn. The design of the space ship is also really cool.

Honestly , the anime OP AND ED were both amazing , and they are part of the reason why I loved the show so much . The ending theme "Glow at the velocity of light " is honestly my favourite anime ending ever. The dialogues also had a lot of emotion in them. I prefer to watch shows in SUB , but im not sure if there is a DUB in english or any other languages.

The characters are my favourite part of the show and are really my reason for loving this show. They are all different and each contribute to the story line in different ways. Sure , we see the sterotypical characters (the super nice girl , the shy girl , the emo boy the super smart guy , the atheletic guy and the grumpy girl with an innocent little sister) but the characters are really well thought out and really relatable to. You get really attached to them , and that makes the ending make you feel even more sad...