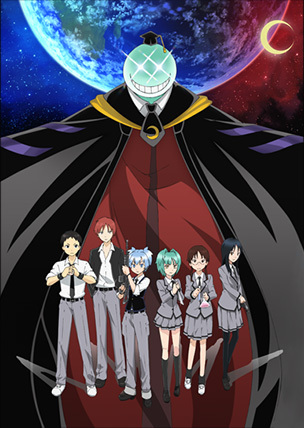 Highly recommend for those looking for comedy, some romance, and decent action.

Recommendation Age Range: 13 and up (adults will love this anime just as much

I spend a lot of time searching for anime that are genuinely “not a waste of time” and I can honestly say Assassination Classroom is one everyone should see. The series has two seasons that I’ve seen and both are quite enjoyable and very well written. The animation is fluid and above average. The voice acting is fantastic and even more so the dub is just as good.

If you are not enjoying the anime by episode 3-4 I would say that you perhaps will not like this anime (though most animes are like this). I strongly suggest watching this anime as it only gets far better.

Ending: There is a finished ending to this anime. Meaning that the anime is not waiting for another season or the manga to continue. I am not sure if there is more to the story, however this does not leave you hanging (Which is almost the biggest concern I have when starting an anime).

Overall Impression: I loved this anime as it was completely what I was looking for at the time. The idea of having a crazy monster who wants to blow up the world as your teacher seems weird and cliché but is really a fantastic story for anyone. The characters (students) learn many life lessons along the way as they try to kill their teacher. The anime has serious moments and very funny moments. There is little to none fan service moments and the plot is simply enough for a teenager yet full enough and complex enough (mysterious) for an adult (I’m 23). I laughed many times during this anime and enjoyed this anime thoroughly. The ending was amazing. I cried a lot. Very well ended anime and one of the best I’ve seen.

I usually have complaints here for the anime, however for this anime there are not many if any. There were no stupid arc plots or moments of pure fan service where you get uncomfortable. The anime is fluid and does have some good pacing. There are plenty of surprises and closure for almost every plot twist.

I write reviews mostly for myself and for the enjoyment of looking back at anime I've seen and wish to remember. My reviews are not perfect and completely my opinion. There may be mistakes, however if you find it helpful then I'm glad. I have many reviews but some are private. If you have questions about an anime I've seen visit my profile of DM for more reviews.

It's have a good story overall, but the story is lacking sometimes. I understand it's just regular students who have gotten a opitunity to play assassins, but sometimes I miss a little action when they focus more on the midt-terms than the assassination. They sound so full of themselves sometimes it's getting surerealistic to a normal regular student who has been crushed down of the other smater ones.

The charachers: theres too many and not reneberable, there are some who outstanding though fx. Nagisa or Karma.

I loved everything about the anime. I especially love Koro-sensei's personality. Such an amazing story-line. I would definately recomend this anime to others.

Summary: A strange new teacher is introduced to Class 3-E at Kunugigaoka Junior High School. The teacher is a round-headed, tentacled octopoid creature capable of moving at speeds of up to Mach 20 and whose color changes depending on his mood. Prior to introducing himself to his new class, he managed to carve out a large chunk of the moon to become a permanent crescent moon. In a year, he plots to destroy the earth, but decides to teach a junior high school class in the meantime for an unknown reason. With this strange creature having effectively taken over the world, the government reluctantly complies with his request on the condition that he does not harm his students.

Affectionately, the students of Class E call him Korosensei, which is pun on the term korosenai (殺せない lit. unkillable or can't be killed) and sensei (先生). These same students greet him everyday with assassination attempts in their journey to save the world by eventually murdering their own teacher, and to earn 10 billion yen from the government.

This anime is above and beyond regular expectations.

It begins as a light anime that tilts a lot towards beying purely comedic but as the story proceeds, (The assassination attempts truly begin) it begins to take a stroll along action and thriller.

Plot wise, this anime is equally balanced within the genres, insuring not a single episode is boring. There's fighting, story-telling and character development in every episode.

The story, (let's be honest, many could've taken such a story and have it ended with pure assassination and gore and your typical mission disappointments and yadi-yadi) BUT this anime managed to achive such an incredible story-telling technique while equally developing ALL the characters (and yes I men ALL, as in all of the 28 students get their screen-time, story and back-ground as well as a time to shine, the other two teacher- being bitch-sensei and karasuma sensei are also beautifully developed on a perhaps slow manner, but that only makes it more heart-aching once you see the result in the end. The villians, and I mean ALL the villians as well. Speaking of which, how many anime can truly manage to make EVERY-SINGLE VILLIAN an attachment to the viewers? And eventually, Koro-sensei. Although some would find it frustrating at how long it took, but in the end you begin to notice how necessery it was to have everyone developed before him. Never-the-less, his background reveal was NOT ONE BIT disappointing.)

I personally found the character development the best feature of this anime, it far surpasses the  more known animes with over 500 episodes (naruto for example) in every manner. You begin to find yourself attached to every single character within only the first 15 episodes. Each of these characters eventually giving the viewer a life lesson (with the help of Koro-sensei ofcourse) while keeping it all above-the-roof INTRESTING!!. (The following is the nicknames the students gave each-other during training, which you'll find HILARIOUS by the time because of how well you'll get to know them)

This anime teaches a person that-

1) No one was born evil, most of people who ended up being mean, angry and bad have a story to back it up, sometimes being as simple as wanting attention from a person they look up to. OR

2) Even when someone seems to be the happiest person, they too could be hurting and have it rough all along,

4) It's OKEY to change your course in life when you realize that you've become someone you no longer recognize,

5) Family and friendship can save even the most damaged souls, if you show them you care

Oh and about the times this anime has broke social taboos-

You can be smart AND pretty

You can be 1st in class AND be a trouble-maker

You can be fragile and innocent AND be strong

You can have an over-sized body AND be admired

Honesly, I can go on and on about this anime and it still won't be enough to express all the laughter and tears and cheering i've put into it.

Would I watch it again? Yes, a hundred times yes, it never gets boring.