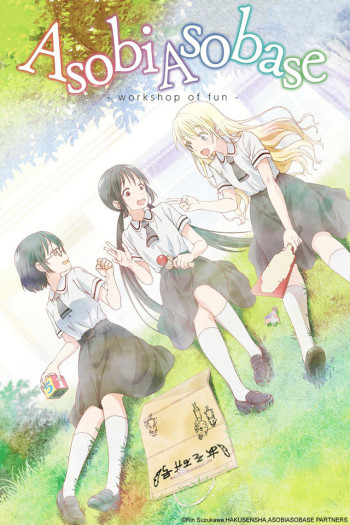 I don't usually watch comedy anime due to my picky tastes, but Asobi Asobase had me cracking up from beginning to end. I wasn't bored throughout 95% of the show and it constantly left me guessing. Just when you thought you knew what was going to happen next, the show throws a twist at you. Absolutely amazing. Definitely recommend watching if you need some cheering up or a really good laugh.

Asobi Asobase is quite possibly the funniest anime I have ever watched.  The only reason I wouldn’t say it’s hands down the funniest is due to the brevity of the series.  It just can’t match up with a heavyweight like Gintama that has a decade of solid humor...but pound for pound, Id consider Asobi Asobase funnier.  Every episode is non-stop laughs.

There isn’t much of a story, the show is very episodic, but doesn’t change the fact that it is friggin hilarious.  The characters are some of the best ive seen in years.  You won’t find any recycled anime girl tropes here (except in the OP😂).  The artwork while not the best, is original.  The facial expressions alone deserve a 10.  The voice acting (especially Hanako) is God Tier.  Not to mention, the english being spoken in the anime actually sounds like english, for once.

If comedy anime is your thing, you can’t miss with Asobi Asobase.

A hilarious slice-of-life anime with loveable characters and always some kind of twist that makes you burst out laughing. I watched this anime quite a while ago and am debating on re-watching it (probably after I finish watching a few amazing sports anime) At first I didn`t exactly know what to expect of this anime, but after watching it, I`m really glad I got to check it out. There`s so many things about it that let it have a really relaxing feel to it.If you like slice of life, or you like comedy, Asobi Asobase will definitely be an anime worth watching! ⌯' ᴗ '⌯

Truly a gem among other comedy anime. Would argue it's as good as Daily Lives of High School Boys, which I previously viewed as the best comedy anime I've seen.

The characters are amusing, the stories are relatable and simple, yet the simplicity is what makes this anime great.

Would definitely watch again and recommend this to all my friends who enjoy good comedy.

If u don't laugh at least once while watching this show I can say with full confidence your a phsycopath. Everybody and their  mother should get to experience the joy of watching this show and thus I bless this anime with my lovely rating of 9/10