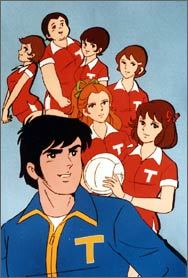 278 users are tracking this. Log in to see stats.

Well, since no one else has written a review for this anime, I guess I'll do it and hopefully my review can help you determine whether this old anime about volleyball is worth it. There will be some comparisons to the longer and better-known Attack No. 1. There will also be some minor spoilers. Story: Main character Hijiri Mimi loves volleyball. She is in her 3rd year of highschool and wants to spend it playing volleyball in the volleyball club. Too bad that the volleyball club was disbanded a year prior after the coach quit and the training of the 3rd years became so hard that one of the younger players died. (If I remember correctly, she had health problems related to her heart and died of a heart attack). The first episodes are spent on finding team members and training to become a decent team, though there are some difficulties, especially related to the leader of the girls' basketball club. Sadly, the rivalry between her and the volleyball club's members is just pretty much dropped at one point and not properly resolved. Once the team is strong enough, it of course plays against other teams and aims to win the national tournament. As for the tournament, the episodes are rather similar, with the Tachibana girls usually having problems countering the opposing team's special attack, but in most cases they overcome it and then easily overpower their opponents. Once you've figured out the formula, it gets repetitive really quickly. With two or three exceptions, the matches are also all rather short, about half an episode if you're lucky. Aside from sports, the anime also has a ton of drama, for instance regarding Asuka and the coach. But I feel that older sports anime really like drama, Attack No. 1 was also full of it. There isn't a lot of focus on romance and I'm thankful for that, as the anime is already quite short. Speaking of length, especially the matches felt rushed and I think that the plot could have easily been stretched out to about 50 episodes to give the characters and especially the rival teams more characterization. Also, most of the times the training is only seen in short sequences and thus, new techniques are mastered in a short time frame. More episodes could have really helped here. Nevertheless, the anime does have an ending that resolves pretty much everything. Animation: Judging from today's standard, the animation looks very dated, but considering that it's from 1977, the animation is acceptable. It is comparable to Attack No. 1. However, especially during the matches, the animation of a specific volleyball move was often repeated and it was quite noticeable, as at times they used the same move ten times in quick succession with the same animation. Sound: The performance of the voice actors was decent as far as I can say. The sound effects were annoying, though. For instance, for Mimi's special receive, they used a specific sound effect (that didn't even fit imo) and play that sound effect every time she uses the move, sometimes ten times within two minutes. Characters: Mimi and Asuka are the most important members. They remind me of Kozue and Midori from Attack No. 1 and out of the Tachibana girls, they received the most characterization. Aside from those two, there are Mimi's best friend Yukari, Sumie, who used to be a manager for the volleyball club but started playing, Tomiko, the big girl, and Kimiko, their weakest player. Those four are pretty flat characters overall. Same goes for the side characters. Most of the players from the rival teams are pretty flat and usually, only the captain even has a name. But then again, with the short length, that is to be expected. Score: 5/10 - it is pretty average and I will forget about this anime soon enough, but it wasn't bad So, is Ashita e attack better than Attack No. 1? For me personally, yes - I rated Attack No. 1 4/10 (that anime is actually rather highly regarded here in Germany as a lot of people watched it as a child, but I am not one of them, so no nostalgia bonus) since at a certain point, I just stopped caring for the characters and the anime altogether and I honestly didn't like Kozue. Ashita e attack is way shorter so it has not reached the 'stopped caring'-point. From an objective point of view, Attack No. 1 allows for more development, a better pacing and more relationships between different teams and thus is the better one of the two, just not for me. Both anime feature plenty of rather unrealistic special moves though that I doubt are possible in real life, so if that's what you're looking for both will please you. All in all, if you've enjoyed Attack No. 1, you might also like this one and if you're considering watching Attack No. 1 but that show is too long, you can try this one since it is shorter and if you really dislike it, chances are that Attack No. 1 isn't for you, neither.