Alt title: See Me After Class 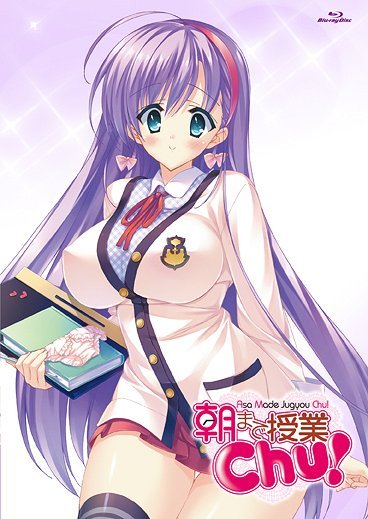 You are now entering the "almost-hentai-but-not-quite" zone of anime-planet. It's not my typical cup of tea, but when the marathon says "watch this", you watch what you must.  And while I can't say why you, reader, are here, I can hazard a guess. So, if you're here for the boobs, just go watch it. If you're here for some other reason, let me give you a glimpse at what you'll be watching.

Story: There is a phrase "plot? what plot?" that is used in the fanfiction circle that means the fiction is almost entirely smut. This OVA would fall into that category. The main character is forced to cross-dress and live with his busty teacher because she screwed up his rooming assignment due to his girly name. She then proceeds to overthink his entire existence and that's when the smooth jazz starts. There are some jumps in logic in this anime that even my suspension of disbelief can't handle.

Animation: Those boobs need to learn physics. It's all very bright, very shiny, and I guestion some of the body proportions and their effect on the human spine. The teacher also suffers from an anime cliche called "shirt conforming" where any fabric instantly conforms to the shape of her bust. Basically, let's draw the teacher naked, but with clothes on at the same time. It's one of the cliches about ecchi anime that bugs me.

Characters: The following archetypes are used: stupid-boobs-with-authority, man-hater-lesbian, and the-personification-of-male-hormones. Who knows, maybe they were more flushed out in the source material, but in the OVA, they are shallow representations of known character-types.

Should you watch this? No. But you're going to anyway.

If the tags didn't tell you already, there's little in this anime that does not involve some sort of perverted siutation. Be it groping in the bath, spanking or panty shots. If that's not your thing turn away and run.

The story starts off with in the middle (bonus points for in medias res?), with the main character in the same bed as the teacher and *pop* out comes the boobies. The reason behind this "awkward situation" turns out to be an administrative error on her part that put him in the girl's dorm. From here on the plot just devolves into perverted scenes. Good job plot, you did your job!

tl;dr Plot? Where we're going we don't need that!

While the animation is not exactly bad it does fall into a number of holes. The clothes on the female characters seem to fit impossibly well. For example, the teacher's shirt goes flawlessly around her boobs in a perfect fit... to the point where it's so snug that her nipples are visible through the shirt despite her having a bra on. Breasts also bounce around in weird ways and generally don't abide the laws of physics...

So... long story short, while not exactly bad there's a number of things are just downright silly.

The voice acting is acceptable for the most part, although there's not much voice acting being done outside of moaning and panting.

Is this a good OVA? Nope, not one bit. But if you want to watch something that is so hilariously bad and cliche enough to make you laugh, be my guest. I'll admit I enjoyed this more than I should've... just because of how bad it was.

This review was made for Marathon #3 of DAMC.

Story: It starts off with a guy in bed with a busty woman. There. That should be it for plot because at that point, five seconds in, you wouldn't even give two shits of a rat fuck about plot. But it shows the plot as she crawls onto him, squeezes him and out pops her puppies. It's that kind of OVA.

Obviously high in logic, you then get your plot: A guy who sounds like a girl, looks like a girl, acts like a girl by being a pansy but is really a guy, gets a scholarship to the school by being so girly. Because of a blunder by his buxom teacher, or the buxom teacher responsible for room assignments, because of his girly name, he's forced to bunk with the dames in the girls dormitory. The buxom principle says "Eh, you can stay there, but if anyone finds out you have a third leg, your ass is gone." So it's a go and the buxom teacher says that she'll look after him. Nudity ensues.

It's your classic ecchi intro, complete with buxom babes, obligatory flat chest (EP only) and fanservice. Loads of fanservice. And I must say, it's faithful to the manga. Extremely faithful. The manga is as smutty and rampantly perverted as the OVA, and I have to give it credit for not shirking on the nudity or just amping up the tits. It takes a good OVA to do the manga or original series justice, regardless of how crappy it is in plot, sense, logic, reasoning and depth.

Animation: I'm sure you know where I'm going with animation at this point. Lets see... them babes be glistening and buttered up, all shining and glowing with youth. And dat bounce, the buxom teacher breathes in, her mammaries jiggle one at a time. And it's like she doesn't wear a bra, with them nipples poking out and protruding through them shirts. And the bounce in general, fine display of physics. But I can't neglect the booty jiggle, that was glorious.

Loads of nipples, boobs, mammaries, tits, cleavage, hooters, censor steam, implications, jugs, buttered up extremities and breasts. Judging the animation on this alone, it's a perfect 10 because screw every other part of animation that isn't devoted to fanservice.

Sound: Sounds like a girl and is kinda annoying. But excellent sound effects, very very excellent. And voices otherwise are excellent as well, if you know what I mean. Can't remember the EP or any music that was... anything. Think there was the EP but that's about it.

Characters: I'm not even going to bother at this point.

Overall: I have to admit, I laughed. Every time I tried to comment or think of something, I laughed. Intentional or because it was funny is hazy but I was entertained. On the flipside, it's pointless, filled with nudity, perverted, lacks logic (Or has some of the best logic ever), is stupid and absurd, tittified and is as nudity filled as Seikon no Qwaser.

* Feel free to drop the overall score by a point or two, you're only watching it for the glistening tits and ass.

I refuse to spend more than three sentences telling you why this anime was terrible and a waste of 30 minutes; occasionally I watch things like this just to remember what I'm not missing. The premise was juvenile, the voice acting worse than nails on a chalkboard, the characters wholly uninteresting, and the story nonexistant except to cobble together some stereotypical and unimaginative ecchi scenes. It gets 1 point only because the timeline was coherent and the animation was decent.