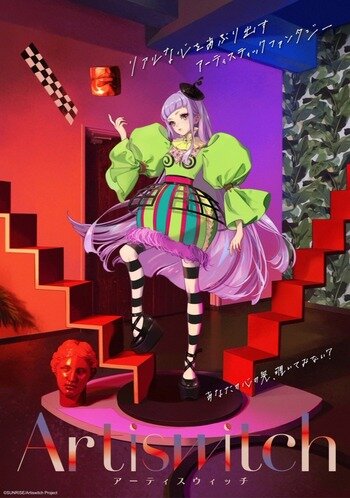 High in the sky is the Yume Kira Dream Shoppe, a magical place where any dream can be granted in exchange for something dear to you. Rin, the shop's owner, and his plush rabbit assistant Alpha sign contracts with those in need, from a beautiful tree to a girl unable to confess to her secret love. Using rare and powerful items, Rin and Alpha will help bring joy to many lives.

There's a corner store that stands between life and death. What final purchase will the people drawn to its light make? And what is the secret of the two who work there?

Count D's pet shop has had roots in numerous countries, from Germany to America and beyond. Always established in the city's Chinatown, Count D offers a variety of rare creatures to qualified buyers. But with his reputation comes skepticism; Count D's shop is rumored to be involved in human trafficking, selling pets that are said to look like men and women. After being investigated in Los Angeles for these alleged crimes Count D sets up shop in the Red Light District of Shinjuku, Tokyo. He continues to offer his services with a curious smile, all the while under the scrutinizing, suspicious gaze of Woo-Fei Rau, D's new landlord.

In this school, there's a rumor about class 1-6. "If you ever have problems about money, visit class 1-6 after school." There, a strange pawnshop is run. As long as you have something to pawn, then you'll be able to borrow a large sum of money. How can a regular student have something valuable enough to exchange for a large sum? It is a shop that accepts human emotions as currency, with love being the emotion that is valued the highest.

There is a new store in that cursed corner of the town. There must be no business at all!!

The mysterious Count D owns a pet shop in Chinatown. However, it's no ordinary pet shop: D sells exotic and rare pets that often have the appearance of a human in the eyes of their new owners. Since these animals are so special, each one is only sold if the customer signs a contract agreeing to abide by the instructions provided, or suffer the dire consequences, all whilst conveniently releasing the shop itself from any responsibility. However, when some customers break their contracts and a series of incidents occur as a result, this small business doesn't go unnoticed. Inspector Leon Orcot begins to investigate D, suspecting him of slave smuggling; but can he get to the bottom of the events surrounding the shop, or will he just be dragged into the Count's pace of afternoon tea and cake?

Nothing could have thrilled Kimihiro more than stumbling upon the bizarre wish-granting shop of the beautiful but unnerving Yûko Ichihara, who solemnly promises to make the spirits plaguing Kimihiro go away just as soon as her fee–rendered in daily afternoon chores at her shop–is paid in full. Of course, the thrill wears off as soon as Kimihiro realizes that his payment plan bears a disturbing resemblance to indentured servitude . . . eternal indentured servitude. Still he soldiers on, ready for whatever number of adventures lie ahead. But in Kimihiro’s case, three may not be the charm!

The Wize Wize Beasts of the Wizarding Wizdoms

Deep in the forest lies a mysterious school of magic: Wizdoms, an institution attended by beastmen of all kinds. These studious fantasy creatures have come to live, learn, and perhaps even fall in love in this enchanting space.