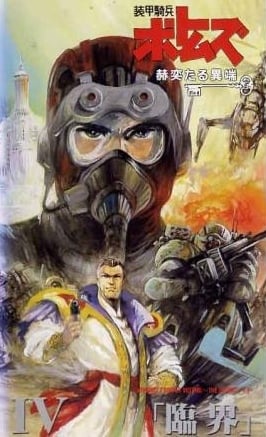 If you're looking for anime similar to Armored Trooper Votoms: The Brilliant Heretic, you might like these titles.

In the year 1996, the space race between the US and the Soviet Union has spread to Mars. The Cold War still continues and there is an ever-increasing chance of full scale war between the two super powers. Meanwhile, on Mars, the student-run "Cosmic Culture Club" arrives at a UN base; but before the kids get a chance to settle in they find themselves under attack from an unknown force using giant mecha! The UN base is quickly laid to ashes and only a handful of survivors remain, but the attack is repelled thanks to the efforts of a renegade mech pilot, Eiji. He is a defector from a race called the Grados and he comes with a warning: the Grados are coming to destroy humanity! He has stolen their most powerful mecha, the SPT-LZ-00X Layzner, and offers to help Earth – that is, if he can convince the people he just saved that he is telling the truth!

Special Vehicles Division 2 is back on duty, along with their Ingram Patrol Labor (Patlabor) robots. Using their courage as well as the Ingrams, Captain Goto's motley crew of officers battle crime in Tokyo city. They also deal with their personal lives, as well as the supernatural.

"Labors" are large construction robots that are now being used to commit crimes. To meet the challenge, Special Vehicle (SV) units are established by the Tokyo PD. However, the Second SV unit is a total joke. Determined to change this, Izumi and Shinohara become pilots of the new Ingram 98 police labors, and are determined to change that reputation, with the help of the SV-2 gang of misfits.

Throughout Tokyo, a frightening number of construction Labors have begun to suddenly go berserk and violently malfunction. The growing chaos of Tokyo is overshadowed by the looming edifice of the Babylon Project, the lynchpin of Japan's plan to reclaim the land under Tokyo Bay. To make matters worse, its lead architect recently committed suicide by throwing himself off of it into the waves below. How will the Metropolitan Police's Division 2 investigate the malfunctions in the midst of world-wide destruction, when the reliability of their own Labors lies in doubt?

Following the events of the first Patlabor movie, after a terrorist attack on a bridge in Tokyo, the whole country of Japan is in an uproar. The Japanese government suspects an attempt by the Americans to destabilize them, but in reality has no idea who is behind the attack. The only clues they have is of a secret organization called the National Defense Family, and the destruction of a United Nations Labor Unit. With time running out, the government calls upon Captain Goto and the Police Labor Force Division 2 to fill in the missing pieces...

When the level of Labor accidents begin to escalate around Tokyo Bay, police detectives Kusumi and Hata are assigned to investigate. What they discover leads to a series of government cover-ups, conspiracy concerning a new biological weapon entitled WXIII-Wasted Thirteen and a tragic, personal connection to Hata. The only hope to stop this threat is to cooperate with the military and lead WXIII into a showdown with the Labors of Special Vehicle Division 2.