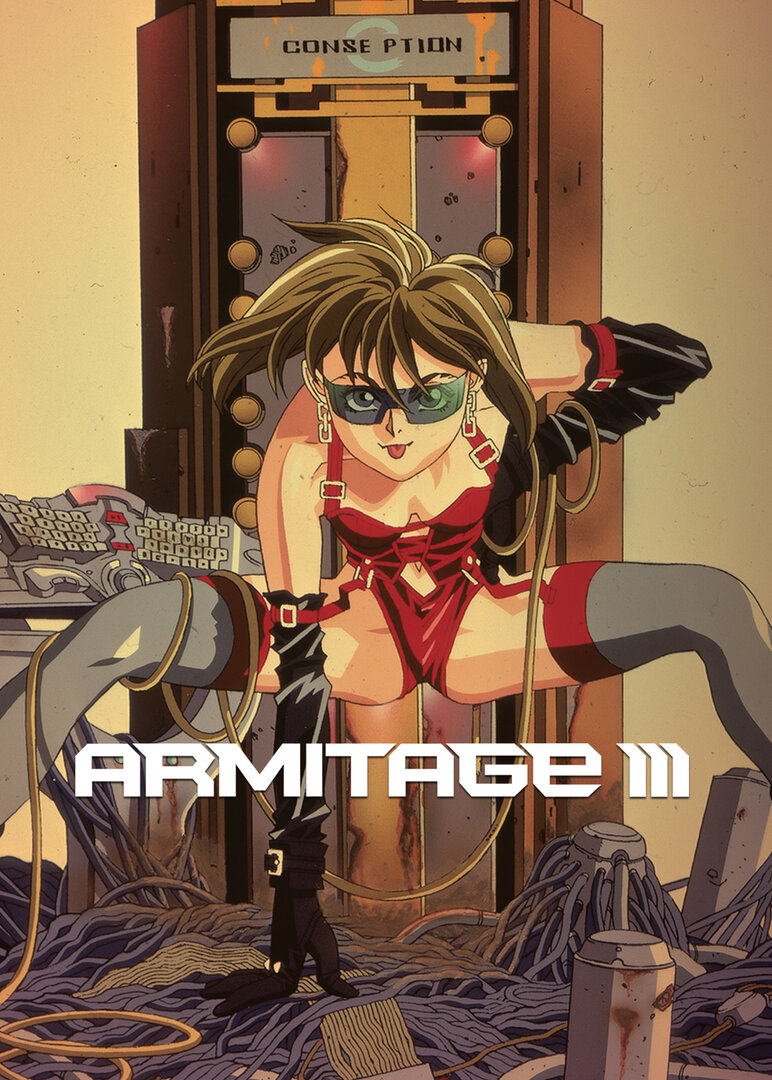 Story
I love cyberpunk. I dress like it, read about it, and am enamored with anything related to it. For god’s sake, I’m covered in cyborg tattoos because I’ve been obsessed with becoming a cyborg since I was 10, and since I can’t physically, I might as well look like it superficially. Thus, people have been telling me for years that I’d love Armitage, yet I put it off until today. The moral of the story? Listen to your friends more often.

Armitage III takes place on Mars, in a dark and futuristic city. Androids, amongst other things, serve as housekeepers, babysitters, and intimate companions, but some feel that robots are becoming too much like humans for their own good. One such man, D’anclaude, has made it his mission to destroy high tech robot prototypes known as Thirds, but what is his real reason? Armitage III follows two cops: the hardened Ross, and the gorgeous gun-toting Armitage (pronounced Armahtaygee as opposed to the English pronunciation "Armahtahjhe") as they try to figure out the reason behind the mayhem, and uncover the true purpose of the elusive Thirds.

Armitage III ends up playing out strongly like a cross between Blade Runner and AI. The story, while perhaps a tad predictable in this day and age, is still wonderfully constructed and engaging. The pacing is fantastic, and in general it just ends up being a damn good sci fi adventure. It’s hard to put my praise into words, so just trust me: the story kicks ass. Even the ending is fulfilling.

The only thing (and this is minor) that I wasn’t down with was the very first shot in the OVA, which is a close up of an android ass that says "don’t touch" on it. It’s a stewardess of sorts walking down the aisle, in essentially a thong leotard. I was quite concerned, because of that first impression, that Armitage III would be nothing more than an ecchi boob fest. As it turns out, that ended up being the extent of the ecchi; the rest was nothing more than the occasional (appropriate for the scenes) naked scene, or Armitage in skimpy clothes. Thankfully, the condensed movie version of this OVA (Armitage III: Poly Matrix) removed that shot.
Animation
For something so old, I am incredibly impressed with the animation. Usually when I watch older titles it’s hard to rate something highly; it’s hard to when you are spoiled with such beautiful current animation. Not the Case with Armitage III; it’s freaking GORGEOUS. From the dark cyberpunk cityscape to the detail of the robots, there’s almost nothing to complain about. Brilliant florescent green and red data flows across Armitage’s visor, prophetically mirroring the Matrix. Dusky street corners are illuminated with neon signs and filled with busy crowds. Literally every shot of the city made me think "wow", time and time again. The level of detail is also incredibly amazing for something of this time period (or even for now). EVERYTHING is detailed, unlike many anime out there that only focus on something like the background. At times, the background shots almost looked real. I also was a big fan of the way the internet (or whatever you’d call it) was represented/

Literally the only thing that I thought was less than perfect was the character designs; specifically, Armitage. She looks very much like a character from the 80s, and often her face in the light was very simplistic and freakish. In general though, outstanding visuals.
Sound
I’m a big fan of industrial music. Thus, I was extremely happy that the opening theme song sounded quite a bit like the background to a 80s industrial track. What better music for a cyberpunk anime than industrial?! Completely effective and a great change from the usual J-pop fest. The rest of the songs were a little more minimal and often bizarre (such as English-singing pop music), but all of it fit wonderfully. Kudos to the composer for making an intro song so catchy to a girl like me, that I’d never skip it. The voice actors were all fantastic.
Characters
Armitage is a badass, plain and simple. Her clothes are hot, she fights like a pro and has an attitude to match. Ross is a hardened cop whose hatred of robots is apparent. Together they have a wonderful dynamic, and both go through a great deal of character development by the end. The villains are evil and the robot types unique (especially the ones near the end, that’s all I’ll say without spoiling). There are plenty of secondary characters who are forgettable, but that’s acceptable in this case due to the strong personalities of the main characters.
Overall
Armitage III ended up being a smash hit in my book, hence the high rating (based not on the average of the scores above, but how much I liked it as a whole). For any fans of sci fi or cyberpunk, there’s no reason you shouldn’t see this. With gorgeous visuals, an interesting story and great soundtrack, this OVA is definitely something that will go on my frequent watch list. Don’t wait, watch it now!

Armitage III, a very important anime in the cyberpunk genre. As usual deal we get androids, a little hacking here a tiny bit of gore there but what makes this one important is while it introduces new issues to the cyberpunk genre, it still manages to keep things simple unlike Ghost in the Shell or Texhnolyze.

We are watching Armitage, our little sexy chick trying to solve murders of type third androids with her sidekick Ross Sylibus, on newly colonized environment of Mars. Things of course will get much more interesting when our heroes learn why the type III androids were built and their full capacity. As I said in the introduction part this one still deals with philosophical and technical issues like other cyberpunk anime's but keeps it simple, not implying it is a bad thing in my opinion Armitage can help one heat up before watching GITS for example so it is a nice job. The story is well crafted, has a faster pace than many other anime in the genre.

To sum things up: Simple, original, weighs heavily on action. Armitage can be a good anime both for cyberpunk lovers and owing to its simplicity,  a good choise for people who want a simpler entry to the genre.

Plot: "The year is 2179: humans and robots have colonized Mars. A newer Third-Type robot has been designed to interact undetected in human society. That is, until a man named D'anclaude discovers their secret and starts a movement to wipe them out. Armitage is a Third-Type that works for the police with her partner Ross, and now these two must rid the planet of D'anclaude and his evil plans." (site synopsis)

Story: Ow god, even till this day i just wonder, how can short animes be better than long ones? Some of us say, "it can't be! long ones have alot more to tell, much more time to develop stuff and they present a much more complex story than the short ones" or other say "the short ones are better mainly because it doesn't need complex stuff to make it good, in other words it doesn't need a hell of an inteligent plot or a long term story to hit the top charts and to impress the audiences". I stand firm and say, yes i agree, short animes are better, and this show is already a proff of my choice. Armitage is a set of 4 OVA's (and a compilation movie, which depicts the events from the OVA's as a remastered version, however some scenes from the OVA's are not included in the Poly-Matrix movie so i strongly suggest to watch the OVA's rather than wasting time with the movie) that depicts a conflict between humans and robots. It presents a future world filled with discrimination against robots which somehow resembles to world from nowadays. The action of this show is centered on a young girl called Naomi Armitage which is a Third-Type robot, a type designed to interact undetected among the human society. The whole thing starts when she meets at the airport a man called Ross Sylibus, which hides a dark past mainly because of robots which he despise. On the same day Armitage and Sylibus meet, an attack takes place at the airport and both of them get involved in it. They learn the existance of a man called D'anclaude who apparently bears a grudge against robots and is aware of the existance of the Third-Types. Armitage and Sylibus become partners, and their objective is to locate D'anclaude and put an end to his attempts to kill robots. The

question is, what would happen to Ross if he would learn that Armitage is infact a Third-Type as well, will their partnership end, or there is more to it than just that? I never expected this show to turn into a romantic story, since it gave me that sci-fi/action mood from the begining. Another question is, why Third-Types are so hated and why is D'anclaude so eager to destroy them? Are they special in any way possible or is just the decision of a madman without a reason? One thing is for sure, there is more to it than it meets the surface and for such a short show i am surprized in a positive way of how well the story was tied up. Armitage stands firm as a masterpiece among all the futuristic/cyberpunk shows i've seen so far. Oh but wait, there is more to wait, a movie sequel called Armitage III Dual Matrix exists as well! Better not spoil anything more because i will do a review about that as well.

Animation and Sound: For an anime produced in the mid 90s i was surpried to see so nice background animation quality and character design and directing, AIC studio exectuded in a perfect manner the animation of Armitage III it certainly did not dissapoint. The futuristic aspect of this show makes the sceneries seem eye-candy~ish. The animation from this show reminds me slightly of the first Ghost in the Shell movie which also aired in the mid of 90s as well. The sound also did not dissapoint as well, the soundtracks were absolutely memorable (infact i could not refrain from downloading the FLAC collection of Armitage III at how good the soundtracks were, of course combined with their respective scenes) i also came to love Hiroyuki Nanba for her soundtracks from Armitage. The voice acting as well wasn't bad since i've always been a fan of Hiroko Kasahara, voicing Naomi Armitage (Vampire Princess Miyu, Yami to Boshi to Hon no Tabibito, Samurai X or Kuran Phantom Memory).

Characters: In terms of characters it doesn't dissapoint as well. Naomi Armitage is quickly presented as a badass character, with cool entries, badass clothes/appearences and amazing fighting skills and determination to defeat those that stand in her way. Sylibus as well is well presented as robot hater which is clearly expressed on his figure. Toghether both of them were a perfect team and very well developed. The only thing is that the secondary characters are very forgetable having roles with not much importance, serving as mere catalists.

Overall: An advice for cyberpunk fans, don't waste time and watch Armitage III you really won't be dissapointed. It has a badass lead, captivating story, splendid visuals and awesome battles. As i said at the begining, this one stands firm as one of the best cyberpunk shows i ever seen, alongside GITS of course.