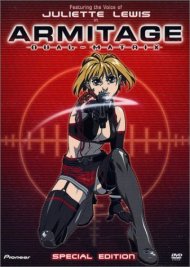 Ross and Armitage are now living on Mars with their daughter, Yoko. Their peace is interrupted when a riot involving the Thirds takes place which alerts Armitage of the possibility that someone is trying to manufacture them yet again. After discovering the truth, she must fight not only for her life, but for Ross and Yoko's as well.

StoryAhh, Dual-Matrix. Yet another time the anime industry has milked a series for all its worth, creating something mediocre and yawn-inducing. Why is it that any time a kid enters the picture, things get ruined? Think about all the sequels to real life movies you’ve seen; it’s always the same format: couple who hooked up at the end of the first movie have had a child, then must embark on some sort of adventure to either a) save the child from some sort of malady such as being kidnapped, or b) go on an adventure with the kids as their sidekick. Inevitably, it always ends up sucking. Why, then, did the creators of Armitage need to ruin such an amazing first OVA with something of such garbage caliber? We may never know. All I do know is hearing "Let go of my daughter you BITCH!" made me think fondly of Sigourney Weaver in Aliens; except Sigourney Weaver had a better reason for being protective. Wouldn’t YOU feel sorry for a little girl who had to watch everyone she knew get ripped up by nightmarish aliens?! Watching the proud mommy storyline just doesn’t do it for me. What I can tell you confidently is that if you loved the first OVA, you won’t necessarily love this one. It’s sort of like the second Matrix movie. They wanted to continue the story, but it just doesn’t have the same impact as the original. The story, if you want to call it that, revolves around Armitage and Ross, and their new addition called Yoko. Another group wants robots out of the picture and has an insidious plan for humanity, and Armitage and Ross again have to save the day. Boooooring. Not only is the idea not unique (wasn’t this same overall-terrorist-concept covered in the first OVA?!), but the pacing is uneven and in general it never felt cohesive enough. I felt like I was watching an episode of a much larger story, not a fully contained movie. It’s hard to explain how I feel about it, it’s just... disappointing.AnimationVisually, Dual Matrix is just as gorgeous as the original OVA, and maybe a little better. Backgrounds are yet again incredibly stunning, with a perpetually dark city filled with neon lights and other cyberpunk goodness. Great character designs, superb action sequences, and very realistic explosions. Like the original OVA, the only failing aspect was Armitage’s facial features (or lack of) and her super simplicity. Seriously though, all of the Armitage series are the Appleseed or Karas of the early 90s.SoundNot nearly as industrial this time, I wasn’t quite as interested this time around. A few orchestral tracks are there, along with some synthy tunes. Still appropriate and non-abrasive. Most of the time, there was no music at all, which helped the mechanical and eerie sounds come across more strongly. The version of Dual Matrix I watched was only in an English dub. Thankfully, this wasn’t as bad as some dubs out there, but it definitely is no ADV title.CharactersLike the story and music, the characters really didn’t live up to the original OVA. Armitage is still a badass but has switched over to mommy mode, which is obnoxious enough in real life, let alone anime. Maybe it’s because I have a lack of maternal instinct and despise children, but it became not nearly as exciting watching gunfights where the main badass is yelling about wanting her child back or giving monologues on the love that goes into creating a child. *Yawn*. Ross has almost no personality this time around, and feels like a secondary character. The villains are utterly useless and have no redeeming value. The only character that I thought was interesting was the repair shop guy, whose freakish clown appearance and overall strangeness made him endearing. There are a few new robot types, but they rarely grace the screen.OverallDual Matrix was a very big disappointment. The original OVA is a masterpiece, while Dual Matrix is nothing but a sequel that tried too hard and had no substance to work off of. If the Armitage series were actually beer, the original OVA would be Guinness and Dual Matrix would be something like Pabst, or Coors, or whatever comparable crappy beer you have where you live. And you don’t want crappy beer, do you? Then take my advice, watch the original OVA, and move on. Or, if you are in the mood for pretty visuals and/or like cyberpunk, check this out anyways.

Dual matrix has better story, better sounds and visuals but only compared to first Armitage series that lasted 4 episodes. If I compare it to other works in the genre,it has some shortcomings.      Let me start with good things, chaaracters are the same as before, they just added a stronger villain and a crazy tech who fixes   droids. Story picks up where former Armitage III left off and builds on it, we are watching Ross and NAomi who are now married and have a little girl. They are in danger because well, nobody likes androids because "they took our jobs!". The rest of the story revolves around above mentioned stuff. One of the best aspects of this one was the action, it is full of fighting scenes and gun fights. Close to its finale there is a "c'mon they just don't die" situation, I personally enjoy watching strong villains. My only negative comment on Dual matrix is: I think it could be 20 minutes longer because some parts in the story were hard to grasp for example how a character get where they currently are? Due to missing simple scenes one can get confused.     All things considered Armitage III Dual Matrix is a good action anime,improves quality(better A/V) Only if it was a little more detailed I would surely have rated it as high as 9 overall. 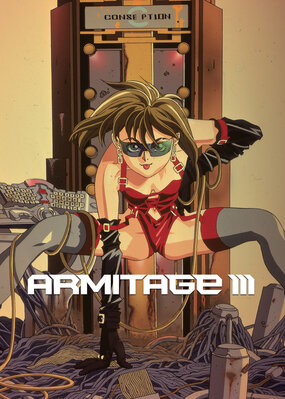 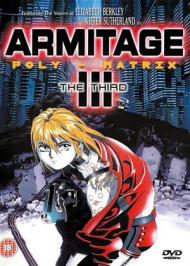