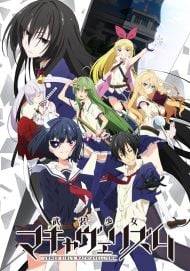 Rebellious Fudo Nomura has no idea what he’s getting into when he’s transferred to a school where the girls carry weapons to appropriately “discipline” the boys into submission. In the Private Aichi Symbiosis Academy, Nomura’s life is actively in danger when he becomes the target of Rin Onigawara, leader of the Five Ruling Swords, the five-girl group that commands the school. His only option: get expelled from the only school that would take him, or survive the wrath of these Machiavellian girls!

Notes on a Scandal

His and Crossdressing Her Circumstances

INTRO I normally do not right that many reviews, but lately I have been compelled to do so. Armed Girl's Machiavellism is no different, especially since I think it's important to know that the anime is quite clichéd and mundane when it comes to plot. However, the fighting scenes are quite enjoyable. If that's what you're looking for going into this series, then there is a good chance you won't be disappointed. STORY The story follows the exploits of high school student Fudo Nomura, who gets recently transferred to Private Aichi Symbiosis Academy. There the girls run the school using force to exert their will upon the boys needing disciplinary correction. Nomura is no exception. He must either conform like the other boys in dressing and behaving like a girl or face expulsion. The guys dressing up as girls is weird. They are so queer looking when compared to actual legitimate homosexual anime characters in other series featuring elements of Yaoi or BL. The part that makes it worse...they aren't necessarily homosexuals, which is why it's just an odd direction for an important anime plot device. It fails and is definitely a negative in regards to the story. After that, it's your typical Shounen, Action, Ecchi, Harem anime, which is fine depending on what your looking to get out from watching this. ANIMATION The animation is relatively fluent and crisp with consistency throughout, especially in the fighting sequences. Scenes aren't overly colorful but have enough variation in the color spectrum to keep the eyes engaged to what's happening on the screen. SOUND No complaints here. The audio effects are adequate during the fighting scenes as is the background music. Otherwise, the overall audio quality is average. I'm OK with that. CHARACTERS As aforementioned, Nomura is a rather chivalrous guy who periodically tends to be overly confident, borderline cocky. However, he is a very intelligent fighter and his personality certainly does not take away from that. He's likeable to, which is plus. As far as the main and secondary females go, most of them are at least decent and likeable characters as well. Satori "Fish Eyes" Tamaba is a crazy, emotionless person who just so happens to be an unexpectedly excellent swordswoman. She is the best female character in my opinion with Amou being a close second. She might even be the cutest of the Five Ruling Swords when her eyes are more "normal" looking and she actually shows some subtle personality. Mentioning Amou, she is a ruthless villain with a unique fighting skill who is just easy to hate. However, near the end the writers throw in a surprise with her character that actually makes her likeable. I think that is both a pleasant surprise and an aggravating one since she is so easy to despise. She's a very good antagonist and an excellent auto-counter to Nomura. CONCLUSION As a whole this series can carry a significant difference in ratings based on what the viewer intends to get out it. Keeping the Animation (8), Sound (7), and ENTERTAINMENT (7) ratings constant, if you're looking for solid fight scenes with barely adequate character development, then the Story/Character ratings would be a 6/8, making the Overall a 7.2. If an original story with strongly developed characters is your forte, then they'd be a 2-4 with the overall being a 5.6. If your looking for a Rom-Com Harem with solid fighting sequences and overall likeable characters, then they'd be a 8-9, giving this anime an overall rating of 7.8. Personally, I didn't know what to expect going into watching this, so I fall somewhere in the middle. If you take that approach then you should still gets some good satisfaction from watching Armed Girl's Machiavellism. ENTERTAINMENT SCORE:  7/10 1️⃣Weighted Average System Score: (12 + 8 + 7 + 21 + 14 = 62/100 points) Additional Information: Video Format:  HD Streaming Audio Format:  Japanese Audio (with English subtitles) Publisher:  Amazon Prime Equipment Used:  Lenovo TB-X103F Tablet (with Dolby Atmos)

Written after seeing 2 ep When I read the discription I thought it might have potential, but as a lover of original plots and interesting characters there is only one thing I can call it: BORING You have your main, how do you know he is the main? He is new, hot and everybody and goes to a former all girls school, sound familiar? He is also the only one not dressed as a girl, good in parcour and can fight of trained swordwomen with only some gloves, not OP at all *wink wink*. Let's talk about the girls then, maybe they are better? No! They are all Tsunderes or some other steriotype, they are weak, whiny and just a pain in the ass to have to listen to.  The one thing this show does good is animation, which is really great. Bright colours, a bit of sagura and beautiful backrounds are all present.  My advice would be to watch it if you enjoy Harem anime or just nice colours, but not for anything else really... You'll just get bored and/or anoyed.

So based on first Impressions I have to say this is fairly mediocre, I never expected much from a battle highschool anime to begin with, but the synopsis seemed like it would be above average. If you like character driven shows I wouldn't recommend this. All of the female cast are just mirrored personalities you've probably seen 100 times before in any other anime. So with that I was betting the fighting to be it's strong point, but the animation gives it a bit of a handicap unfortunately. I say this with cautious skeptisism knowing it's only the first episode, but generally the first episode of any anime is a good indicator of what's to come and what I saw has a hell of a lot of still frames in the middle of a sword fight. I think where this show will draw it's strengths later on is in the way it handles the strategy of how it's combatants fight and the techniques they use. The stiff animation aside I can see some interesting pairings happen in reagrds to battlin one another.. Another merit is it's music which is quite epic, although I'm not sure it fits with a high school setting. I'm probaby going to drop this series either way, but maybe I'll stick it out a bit longer to see if it can break away from it's genric mold. 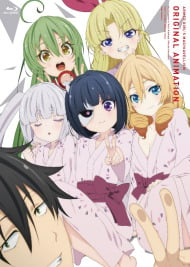 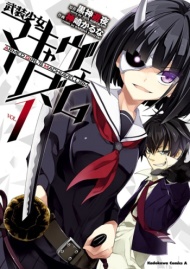