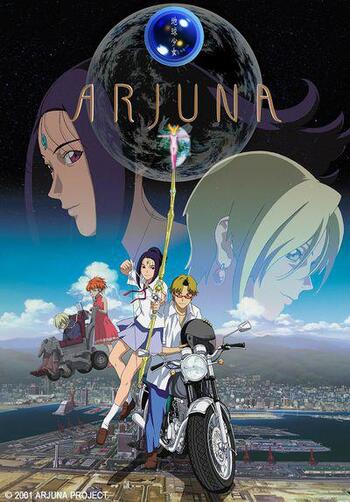 Juna didn't think much about daily life beyond the archery club, high school, and boys. But when an accident sent her spiraling towards the arms of death, fate intervened by giving her a second chance at life, under one condition: humanity is recklessly polluting and destroying the world, and Juna, with newfound powers of the Earth, must dedicate her life to saving it. Now, an unthinkable evil she can see with her powers is threatening Earth's very existence, and only she has the power to stop it...

Excuse me for missing innovation in my comparison skills but Arjuna really IS the Japanese counterpart of the American Captain Planet cartoon. Its prime directive is to teach the target audience how to respect nature and the basics of ecology. Of course it is far more mature than Captain Planet, as it has a lot of violent, tragic and even slightly horror aspects to it. That does not make it a better show by the way; only more mature. Because just like the cartoon, all its morality is thrown at you with long serious monologues which can easily pass as preachy. Learning stuff through anime can be fun but not when the characters are telling you to open your textbook on page 123. Animated by Studio Satelight which for me never made many good shows (I personally only like Noein from their roster). This is amongst their better works since it went all out with the aesthetics. Directed by Kawamori Shouji, who made the cool Macross - Do You Remember Love? film but otherwise never managed to score high in any of his other works (later Macross series and Basquash). What Arjuna is about has a lot to do with a coming of age adventure for its lead girl. It may easily pass as yet another mahou shoujo show, as she is at first just a normal teenager who wants to have fun with her friends and romance with her boyfriend. But as it usually happens, all of a sudden she is given super powers to protect the world from monsters who want to destroy civilization. Yes, very typical on its initial premise.After that, the show becomes more and more unorthodox to the point you have no clear idea of what it’s all about. It simply has too many themes in it, with ecology being its prime and most memorable aspect. Unfortunately, none of all those themes pass as interesting on the long run because they hardly feel exciting or exploited enough for you to care. I mean it has a guy who got crazy on ideals and a little girl who already knows what an orgasm is because she can feel the memories of her parents and a grandpa living on the mountains who preaches about the wonder of life. All these sound interesting on paper but feel so disjoint from one another to the point where the show has no uniformity about what its all about. Even the lead girl’s magic powers don’t manage to attract your attention much, as they are used scarcely throughout the show and only for stomping some monster with no personality. Otherwise, the mahou shoujo aspect is indeed very controversial in its application, as it is not used on each episode, gives the lead girl a very weird appearance, and its prime weapon is a bow. Beyond that, Arjuna is indeed a very interesting character as her psychology is shown through numerous aspects and her worldview is tested numerous times. There is a part where she feels sick to even eat a burger because she sees it as toxins and chemicals and not real food. Her development and growth is actually far greater than any magic girl out there. On the other hand, all the rest of the world feels cold and distant. All the rest of the cast is too stuck on a one-track mindset and the only thing they receive as development is questioning their ideals as of that time. Feels better than remaining stiff in personality but still happens through dried up monologues and counts as two-dimensional. Beyond all that dryness, the show’s greatest downfall is its snobby attitude towards the viewer. It is so polarized towards “nature is good, human civilization is evil” that it becomes ridiculous. Poor old humanity and its science has no counterattack towards all that; its presented evil-by-birth, like Nazis or KGB agents in American movies. It even goes as far as saying “You are all idiots if you don’t accept what we tell you.” Well ok, even if you are right, that’s not a way to address it in a format which is meant to be mostly for entertainment and not pro-ecology propaganda. Which is sad.The saddest part is the aesthetics of the show which are just marvelous for the year the anime was made. The use of colors and cinematography to depict plants and pollution as two worlds at war is fantastic, while the filters used on Arjuna during her magic attacks are quite funky. Even voice acting and music themes are quite well done and put you in the mood of the show. An uncommon series that wins in thematics but loses in presentation. Too bad many parts of the show seem like propaganda against technology and progress because otherwise they are quite intelligent and well done. If it wanted to preach the viewers about morality and pretense, it should have taken the road South Park walked on. Just mock everything and let the viewer decide what to accept as right from all that.

The story follows Juna, who was just an ordinary high-school girl, right up until the day she died in a motorcycle accident. But in the twilight of death, she saw a vision of the future, of the barren earth destroyed by something call the Raaja, and was offered a second chance at life if she would help stop them. Now she must learn to cast aside her thoughtlessly destructive ways and face her destiny as the Avatar of Time, the one being who can decide the fate of the planet.If you can't tell by the description, you'll know it within the first couple of episodes of the show, but the series makes it blatantly obvious as to what the message is, to take care of nature and not carelessly intrude on it and pollute it with human made machines. It feels like a first year philosophy class, and the show shoves it down your throat by the end of it. You don't have to be subtle to get a message across, but it would have been nice if the whole thing had been a little less in your face.On top of that, the whole thing feels weirdly edited, like a lot of ideas had to be cut down to fit 13 episodes. The pacing is off and it does feel like it's rushing through some things. If it had some more space to breath, not only could everything had a much nicer pace, but characters could have had a proper chance to get fleshed out, but there was probably a rush to make it fit the 13 episode count instead of 26. Maybe the overtones wouldn't have been AS obnoxious.Everything does look pretty nice, especially the art style, but it does have the thing that a lot of anime has that sticks out like a sore thumb. CGI. While it does have some decent CGI for 2001, it's pretty obvious that it has aged like nearly every other anime that has CGI from the time. It hasn't aged as bad as some of the stuff that I've reviewed, such as Nazca, but the whole thing makes a pretty good example of why CGI shouldn't be a go to for cutting costs for anime. I guess CGI had to have some growing pains, but CGI from that time in anime just makes it look a lot worse.There is a decent idea here, but it's buried entirely under a mediocre execution. I guess it could do with a remake, make it the full 26 episodes. Sure, it would have had some filler if it had that many episodes, but I'd rather have series with filler if it meant a better overall experience than a series rushing through it's plot and character development.